Home Archives Profile Portfolio
This is Us, Christmas 2021
Finally...Antarctica! 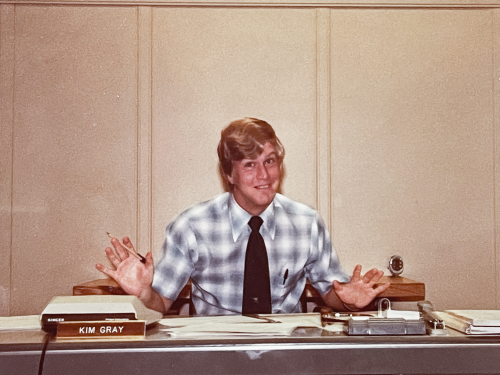 Who is this handsome young stud, all spiffed up and sitting at his own desk?

That is my Kim in July 1978, just as he was beginning his career as an actuary at American United Life in Indianapolis. 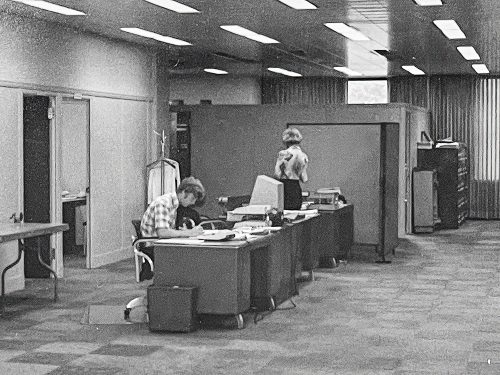 We hadn't yet gotten together, but I'm so grateful that his proud mother Peggy took these photos of Kim as he was just starting out in his business career after graduating with his masters degree in actuarial science from Ball State University. 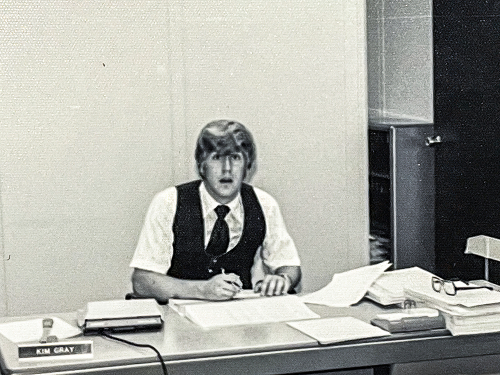 And this is him today. As of December 31, my husband is RETIRED!!!

It's hard to believe that this time of life that we thought was so far in the future is "suddenly" here! As 2022 begins, we find ourselves in a new season of life.

Kim started out with AUL with the intent of passing all 10 of the very difficult actuarial exams. When we began dating in early 1980, he had completed Exam #5 and had earned his actuarial associateship and was studying for Exam #6. He needed to pass 5 more exams to become a full-fledged Fellow in the Society of Actuaries. He quickly found out that having a good relationship with his new love was not very conducive to studying 6 hours every day in addition to working full-time, and he decided to be content as an Associate and see where that path would lead.

As it turns out, that decision was wise. After learning the actuarial side of the insurance business, Kim had an opportunity to move into sales which led him into a very successful career. After he left AUL, Kim worked for a couple of other companies before being hired to work at Anthem Blue Cross Blue Shield.

I have very few photos of Kim at work, because he never wanted that to be his identity. It was a job, paid the bills, but never the top priority in his life. I rarely went to his office because his work, while he gave 110% those 8 hours every day, was just never that important to him. 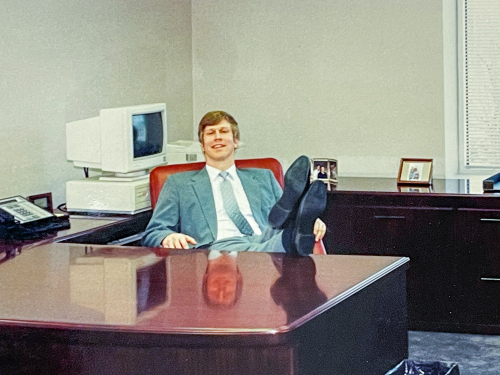 But I do remember when he got his first "big, window office" in January 1992. We thought he had made it to the top! He was an executive!

Remember those days when all people in business dressed up for work? Kim always wore a suit and tie. No one would have dreamed of going to work dressed casually! 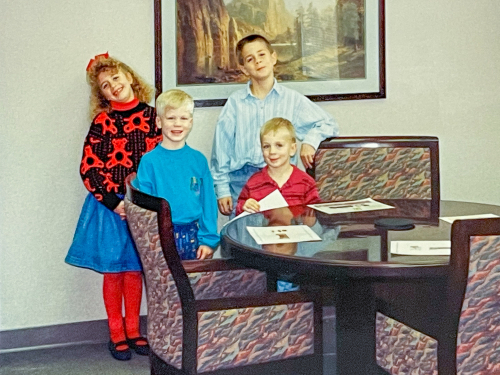 I brought our children to see Daddy in his snazzy office. Emily was 7, Kamaron 5, Kristoffer 9, and Kyler 3. 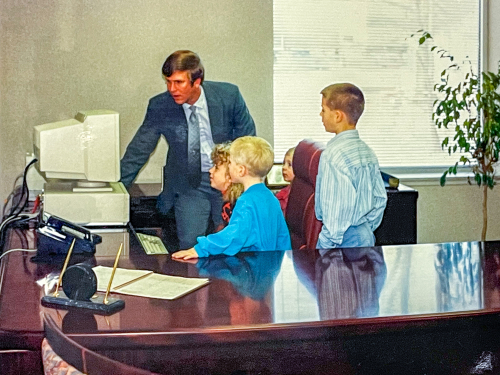 Kim had his VERY OWN COMPUTER in his office...now THAT was BIG TIME, for sure!

Wow. Where did the years go???

In 2010, Kim "retired" from Anthem to join a start-up company called Activate Healthcare. Those were the years when Obamacare was just getting off the ground and Kim truly believed that this new company would help solve the healthcare crisis in our country. At the time he joined, he was the 4th person in the company, just behind the co-founders Peter and Deb and the first doctor they had hired for the first clinic. Since that very humble (and often frustrating!) beginning, Activate has grown exponentially and has been acquired by a couple of other bigger companies to become one of the main players in the on-site health clinic arena.

Those first couple of years at Activate I remember all too well. Kim still has a letter of resignation that he wrote in a fury one day in a file on his computer. He never sent the letter but there were a few other times that he threatened to, and I think it brought him comfort knowing it was there just in case. There was no office support...he (and I helped him many times) did all the printing on his own and we even put together bound presentations for potential clients. Very unprofessional-looking, but we got them done and I guess they did the job. Kim's laptop was a cast-off from Peter's wife Zora and the password on that laptop was Zora's mother's name! We laugh about it now, but that's what I mean about humble beginnings! I'm very proud of Kim's part in not only building that company into a success story, but along the way really making a difference in the health and lives of people. It's a career Kim should feel good about and I think truly enjoyed. But the challenges of the pandemic added to his already considerable frustration with technology, and at 66 he decided it was time.

So here we are, excited to embark on a new journey together!

A new year, a new season of life.

Congratulations Kim & you too Terry!!!