Our trip itinerary called for one final landing on Antarctica, but that was not to happen.

All morning the ship's captain and our expedition leader searched unsuccessfuly for a spot with waters calm enough to launch the zodiacs. It was not to be. 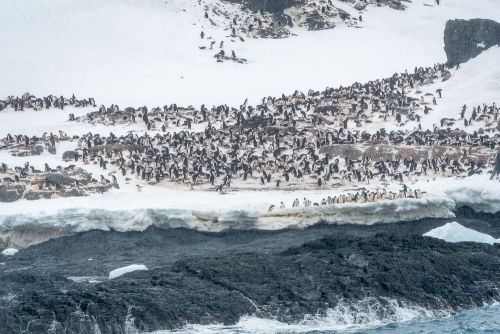 So instead of getting to walk among these huge colonies of gentoo and adelie penguins, I was resigned to grab my longest camera lens and take my final penguin shots of the trip while holding onto the deck railing of the ship. 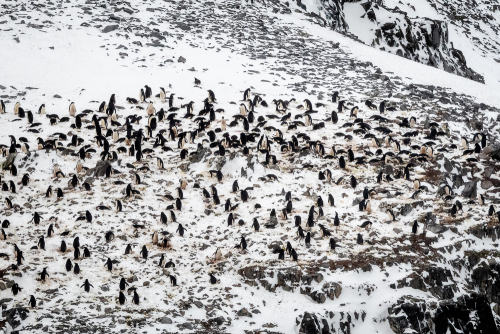 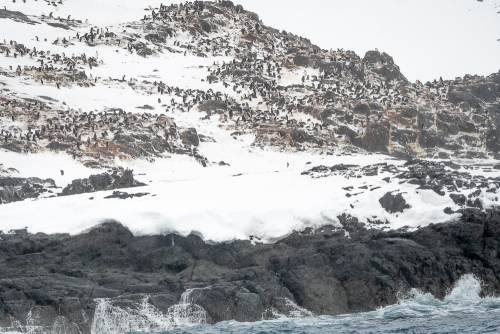 These volcanic mountains were literally covered with penguins! There are no trees or shrubs sticking out from those rocks...every dark speck you see is a penguin.

Thousands upon thousands of them. 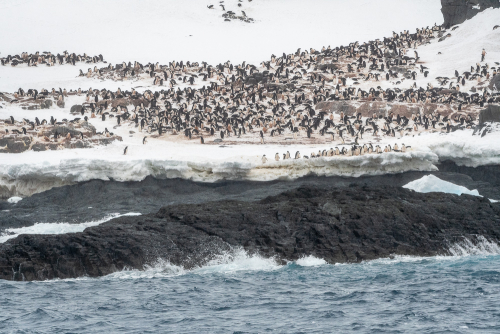 It was windy and raining and just generally a nasty day, definitely not one we'd want to be zodiac-cruising in. But still, it was disappointing not to get in one last landfall. 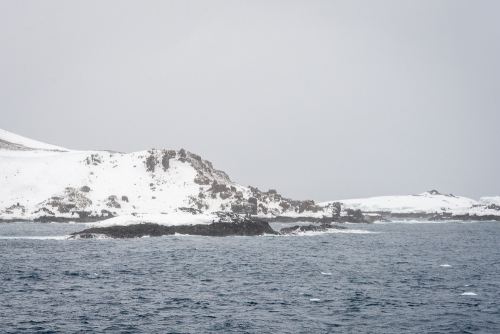 After searching for calm seas all morning, reluctantly the captain turned the Explorer northward toward the Drake Passage and headed for the port city of Ushaia, Argentina, the southernmost city in the world, where we would disembark and begin our series of flights home. 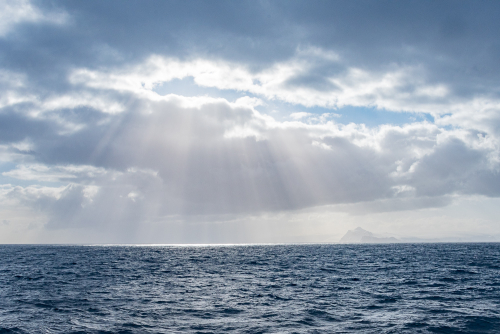 As we neared the Drake Passage that evening, the sun finally broke through the clouds and we hoped for a relatively smooth sailing back across the Drake. We had dinner and even as we crawled into bed that night, the ship was beginning to roll. By the time we got up, we were experiencing the "Drake Shake." Which would continue for the next 48 hours. Thankfully the next 2 days the weather was fine. I cannot imagine doing this in a storm, and my mind kept thinking about those intrepid early explorers in wooden ships who endured days upon days of these kinds of rough seas.

I didn't even try to get on the deck for any photos. In fact, for most of those 2 days the deck entrances were closed to all except the ship and expedition staff. I guess they really didn't want to deal with "Man (or WOMAN!) Overboard" in the middle of the rocking Drake Passage. My teeth chatter just thinking about falling into those turbulent, icy waters. A girl like me wouldn't last more than a few torturous, terrifying seconds.

We could barely stand up inside the ship most of those 2 days. The crew put up ropes all through the corridors for people to hang onto as they moved through the ship. Over half of the ship was seasick...thankfully Kim and I took our Dramamine even though we weren't sure we needed it and both of us fared well. Meals were challenging for everyone from the cooks to the servers and diners. The dining room was nearly empty those two days, as many stayed in their cabins. Kim and I, though, managed to find a way to eat our meals (we are of the Gray/House clans who make eating a priority!), although I did have a glass of ice water tumble over me when a rogue wave hit the ship sideways. 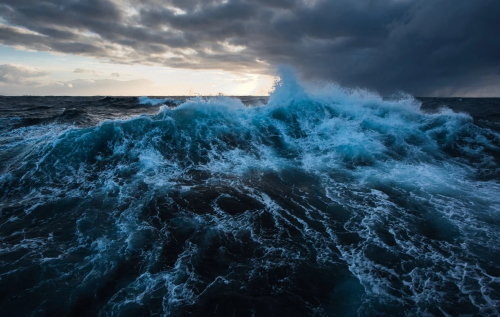 Anyway, this was our view when the sun went down that first night. In our cabin bed at night, several times we were almost thrown off the bed by the wild seas. And the second day was a replay of the previous 24 hours. Rocking and rolling, constant, all day long. Every once in awhile a huge wave would crash over the boat and for a few seconds we all wondered if we were going down, but the Explorer kept plowing through the waves northward.

When we finally left the Drake Passage and made our way through the Beagle Channel to Ushaia, the boat stopped shaking and it felt kinda odd for awhile. Life on the Explorer returned to normal, with passengers moving about again, conversing and laughing and eating. We had made it!

Our Expedition Leader Lucho summoned all the passengers into the ship's lounge for an update. Any time you hear someone say, "I've got good news and bad news," it's never good.

The good news was that we had made it safely to Argentina and the results of all of our final Covid tests (I lost count but I think this was our 5th test of the trip), required to disembark into Argentina, were negative. (Honestly, how could they have possibly been anything but negative as we had been in our travel bubble for almost 3 weeks now, seeing only each other and penguins?)

The bad news was that, while we were gone, the United States TSA had closed all airports to incoming international flights! WHAT??? So the Lindblad Expeditions office in New York had been frantically making new travel arrangements for all 63 passengers plus the expedition team to get back to the States. Instead of flying on our charter plane from Ushaia to Miami, we would now be going from Ushaia to Punta Arenas, Chile to the Bahamas (which is a US territory and therefore a plane from Nassau would be allowed to land) and then on to Miami.

Those new arrangements added about 12 hours onto our travel time home, assuming there were no other hiccups along the way.

We disembarked in Ushaia and walked to a catamaran moored in the port for lunch at the dock. Then we loaded buses and went to a local museum that was formerly a jail. It was weird being among crowds of people after such a long isolation and that day definitely popped our "travel bubble." 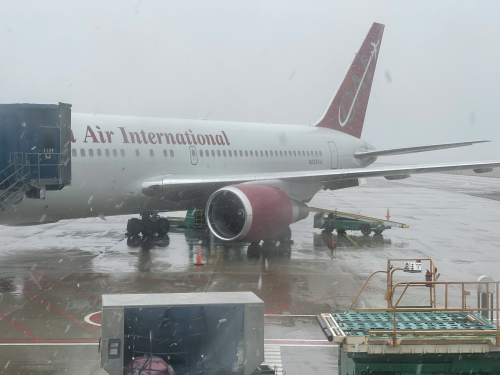 From the museum, we went to the Ushaia airport and waited a few hours for our flight to board. During much of that time, it was snowing heavily and we wondered if the weather would delay takeoff.

But snow in Ushaia is very normal and we left without a hitch. The plane stopped in Chile and we sat on the plane for a couple of hours while they did a crew change and fueled up the plane (why it took 2 hours to do that, I don't know...). 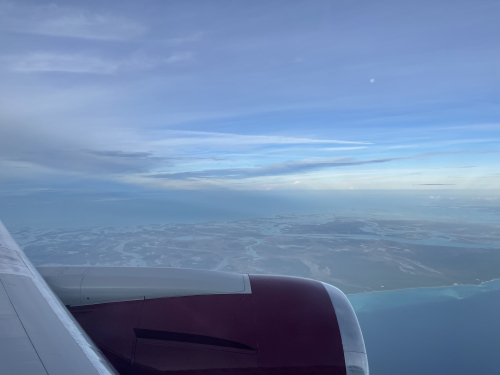 Then it was on to Nassau where we did get off the plane briefly then got right back on. 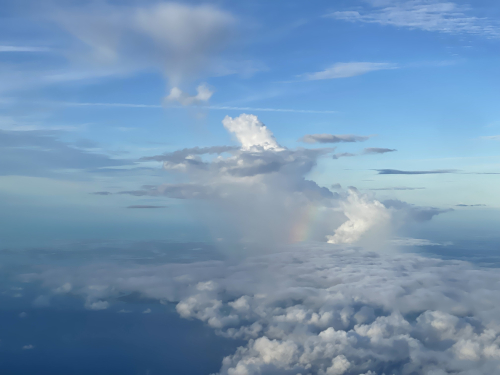 Our final air leg of a trip of a lifetime...we were so thankful to step onto US soil again!

Incredible journey to the most remote destination on the planet, a place I never dreamed I'd see. Antarctica seems like worlds away from our life in Indiana.

And we definitely were forced to take...

This is my final Antarctica post...thanks for allowing me to share our amazing expedition!