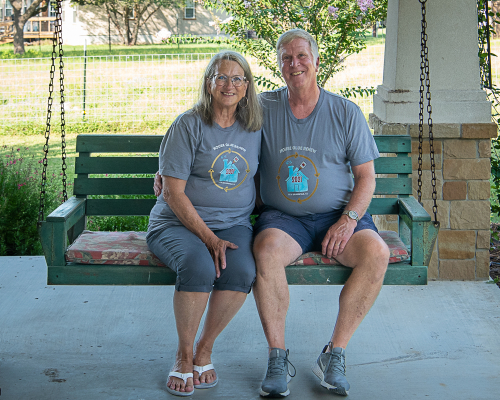 Shortly after this photo was taken on Mark's porch, we hugged everyone and said our "good-byes."

We made the 40-minute drive to the San Antonio airport, turned in our rental car, and checked in for our flights home. We were flying American Airlines to Indy through Dallas, which is one of the major American Airlines hubs.

The sun was shining and we were both in high spirits after a fantastic weekend with my peeps. But an unbelievable sequence of events unfolded that day, and here I'm going to get out my notes so I can accurately recount the weird things that happened that day in the San Antonio airport. I wrote them down as I knew I'd never remember them.

These next few pararagraphs will probably get a little laborious, so you may have better things to do than to read my play-by-play of the airport craziness. But I want to record it for posterity's sake, as I surely hope never to have a travel day like that one again.

Our flight to Dallas was scheduled to leave at 12:30 pm. to arrive in Dallas at 1:45, a short air hop across the state. While it was a gorgeous day in San Antonio, apparently there was a line of severe weather making its way across Texas that caused the flight to be delayed an hour or so. We finally boarded the plane, then sat on the runway for another hour awaiting clearance to take off. Finally, about 3:45 (over 3 hours past our scheduled departure time) the plane left San Antonio enroute to Dallas. At this point, we had already missed our connecting flight to Indy and we knew that once we arrived in Dallas we'd have to find another flight.

But...while we were in the air, the Dallas airport CLOSED. Yes, it closed down just as we arrived. We were above the clouds where the sun was shining, but it was stormy beneath. The pilot explained we were in a holding pattern, continuously circling the airport until it opened back up. After about an hour of this, the pilot came back on the speaker and told us we were running low on fuel so were going back to San Antonio.

Around 7:30 pm. we arrived BACK at our starting point...and were told to just hang tight, that we would eventually reboard the plane and try again "soon." Our luggage was still on the plane and they were leaving it there for now. So we waited...again...for another hour or so then reboarded the same aircraft. We sat at the gate for a good 45 minutes due to an "air circulation maintenance problem" (how in the world did it just break while sitting there at the gate?) before we were told to get off again and our luggage was being unloaded too.

In general, up until this point, the passengers had been irritated but pretty patient. After all, a severe storm is no one's fault and we certainly don't want to fly if the conditions are dangerous. But after this second deplaning, folks were getting upset. Kim, on the other hand, was amazingly complacent during all of this. Normally he's not a very patient traveler if things don't go as planned, but he was taking this in stride and still in a good mood. For which I was very thankful as the frustrating evening was still young. Oh yes, there was more to come...

At long last, it was announced that the Dallas airport had reopened and we were all to get in line to catch one of the final 3 flights into Dallas. At 10 pm, we made it to the front of the line and secured a spot on the second plane leaving, supposedly departing about 10:30 pm. I immediately got on the phone to try and find us a hotel room at the Dallas airport, knowing we wouldn't be flying into Indy until the following day. It had already been a very long day spent in the airport and we wanted to get a little sleep. But there were no rooms available in the Dallas airport area! Sold out!

As it turned out, it was a good thing I couldn't find a hotel room. When our plane arrived in the air over Dallas, about 11:30 pm, we couldn't land because there were no gates available! What???!!! Have you ever heard of such a thing??? I mean, the airport controllers knew we were coming...why did they let us leave if there wouldn't be a gate available? So...you guessed it...we had to TURN AROUND AND GO BACK TO SAN ANTONIO!!! I thought at that point we might have a mutiny on board the airplane, people were furious. To top it all off, when we got back to San Antonio, we had to sit in the plane for 45 minutes due to lightning in the area.

By now, it was Monday morning about 12:30 am. We were told to claim our luggage and get in the rebooking line in the ticketing area to rebook flights. Miraculously, our luggage DID finally show up on the belt, some of the last bags, so by the time we got them we were dead last at the end of a VERY LONG line. I had counted over 100 people in line in front of us when I stopped counting.

We waited 3 hours (that is no exaggeration) in an excruciatingly slow-moving line. By the time we made it to the ticket counter, it was 4:30 am. and, not surprisingly, there were no options for us to leave until Tuesday. My heart went out to the older, very sweet and patient gate agent lady who helped us...she'd certainly had a long night too and dealt with a lot of very frustrated passengers. We told her we did NOT want to go through Dallas, to send us home through Charlotte or even Chicago. God apparently did not want us in Dallas and after flying there twice in the past 12 hours and never even getting to land, we had no desire to even attempt to go to Dallas.

She booked us an itinerary through Charlotte but we couldn't go until Tuesday (the following day). So when the rental car office opened at 5 am. on Monday morning, we rented another car and drove back to Mark's for an unplanned extra day in Texas hill country.

It was Monday, August 2. Which happened to be our 41st wedding anniversary. 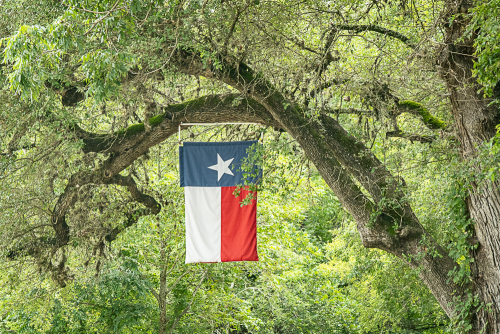 After being up all night at the airport, we crashed for a nice long nap that morning at Mark's house then decided to spend the day just exploring the nearby area.

I love the patriotism and feeling of self-sufficiency and independence you get in Texas! 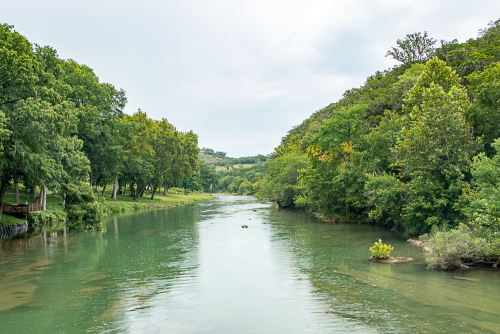 We meandered the road that follows the Guadelupe River, crossing it several times along the way. 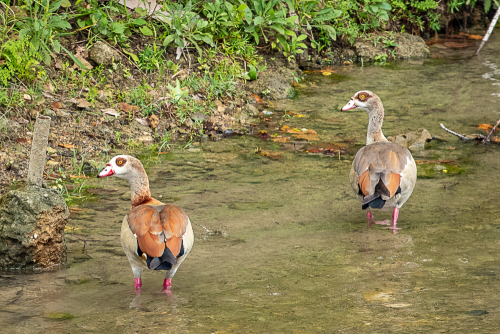 A pair of Egyptian geese eyeing us... 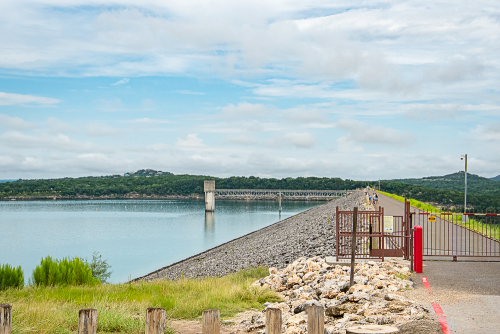 The dam at Canyon Lake...we saw it from the water on Saturday, this is the view from the land. 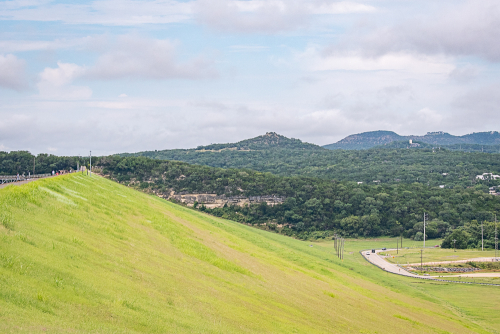 A good view of the surrounding landscape... 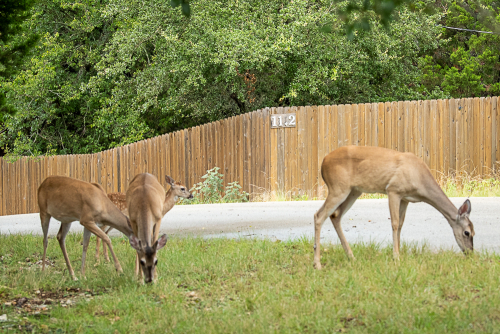 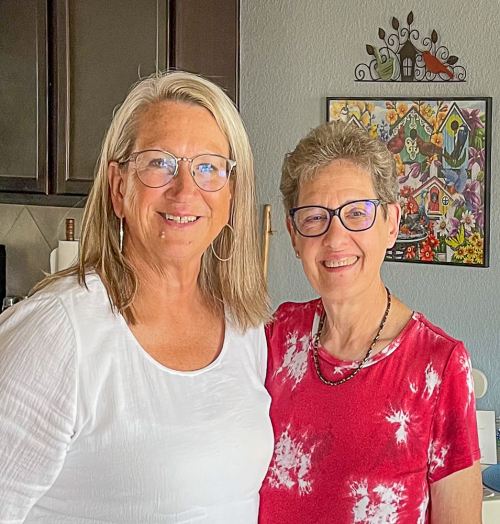 Anna, one of my roommates from my college days at Indiana University, moved to New Braunfels a couple of years ago. We took the opportunity to pay her a short visit. So great to see her again! 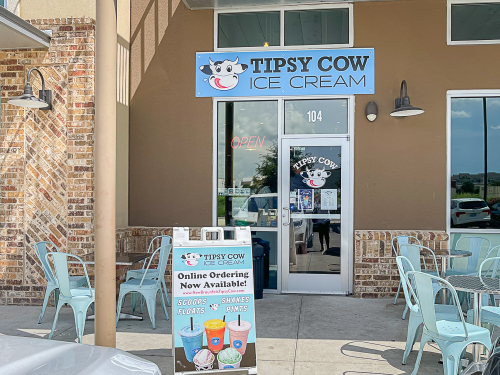 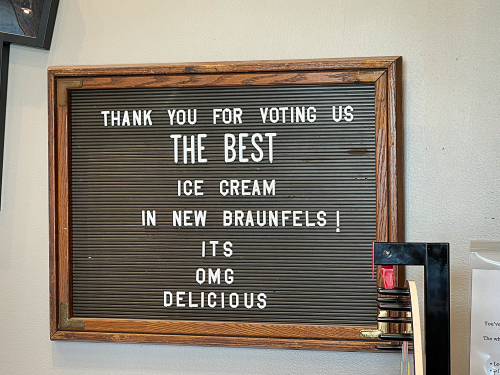 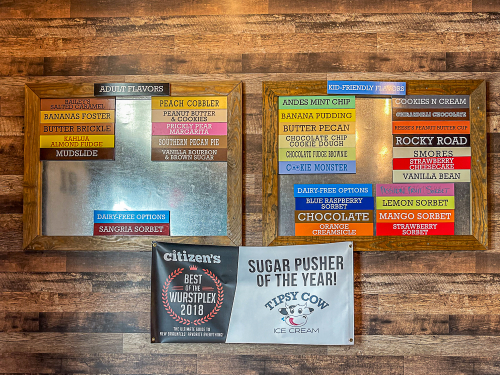 While they had an interesting assortment of "spirited" adult flavors, we went with the kid-friendly options.

DELICIOUSNESS!!! Highly recommend you check out the Tipsy Cow when in New Braunfels! 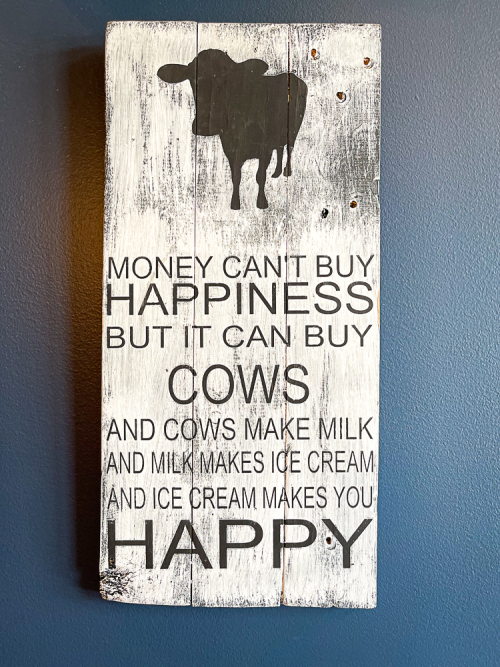 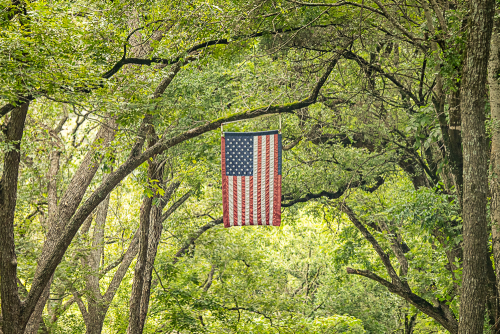 We enjoyed our afternoon driving around. 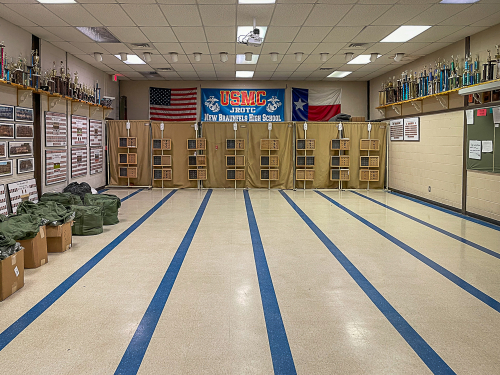 Since it was our anniversary and Mark and Alli had just celebrated their 26th anniversary the week before, we decided to do dinner out together at a nice restaurant.

Mark is a retired Marine Corps officer and now runs the ROTC program at New Braunfels High School. On the way to the restaurant, we stopped by the school so Mark could show us his classroom and workout areas. 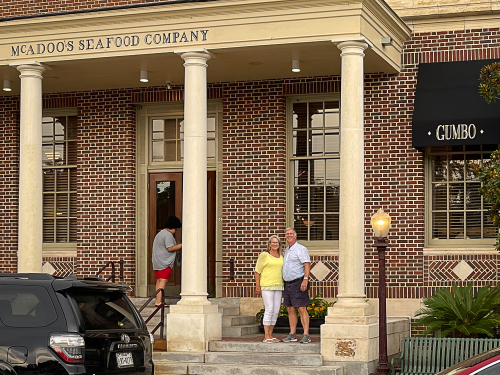 Celebrating our 41st anniversary at McAdoo's in New Braunfels.

It is the old post office, refurbished into a classy restaurant. 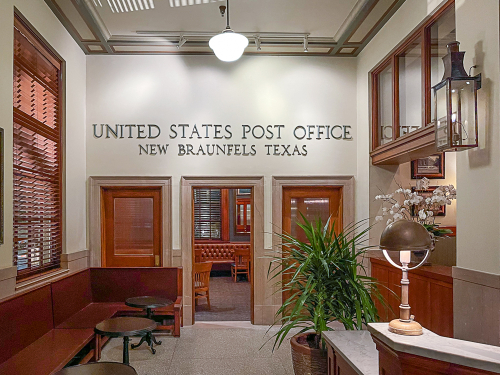 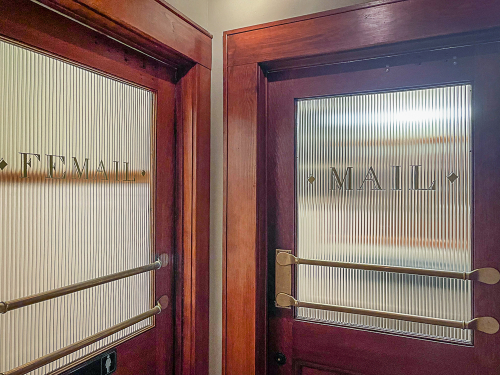 I'm a sucker for clever bathrooms...

We enjoyed a wonderful and relaxing meal before going back to Mark's for the night. Poor Ethan...he got kicked out of his bedroom again... 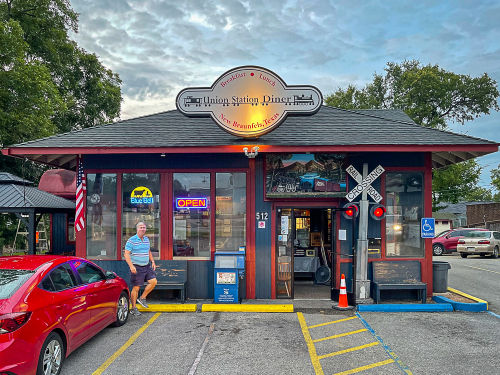 Morning breakfast at the Union Station Diner, then off to the too-familiar San Antonio airport for an uneventful (I'm all for uneventful!) travel day.

The whole situation started out very frustrating, but in the end we truly enjoyed our relaxing and fun...