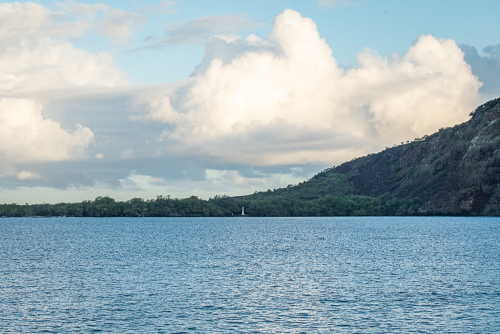 My favorite morning of our week on the Big Island was the day we arrived at Kealakekua Bay just after daylight to watch the spinner dolphins. 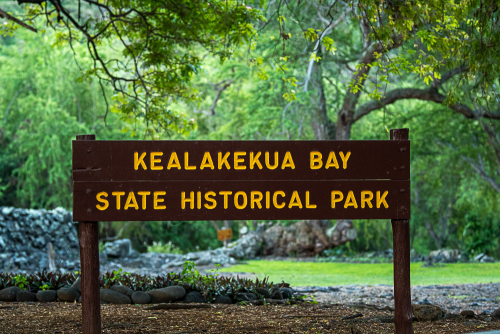 The parking lot is tiny, and we'd tried to stop earlier in the week but it was too crowded. So Kim and I decided to beat everyone there and get prime seating for the dolphin show. 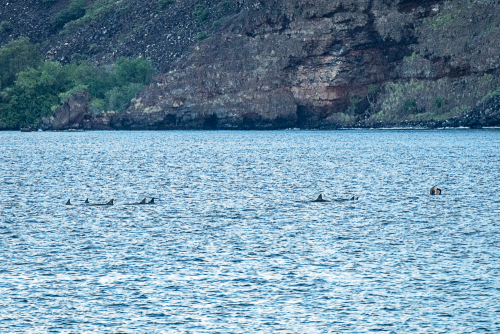 A large number of spinners live here in this bay, and it's a favorite spot for swimmers who want to frolic with the dolphins. 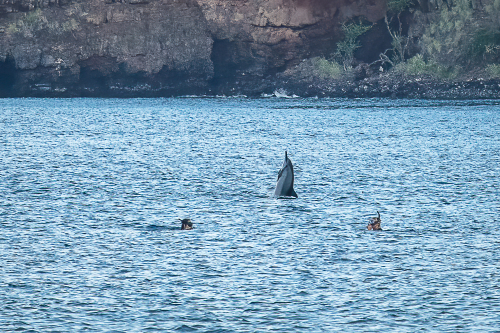 A couple of swimmers were already there when we arrived just after daybreak.

Kim and I are not strong swimmers at all, so we were content to sit on the seawall and watch from a distance. 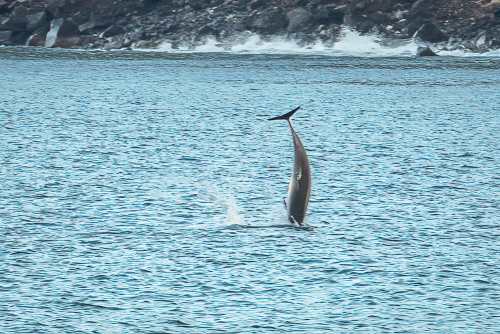 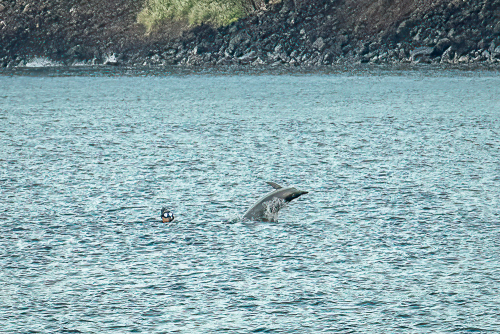 Amazing how close the humans were to the dolphins! What a thrill that must have been! 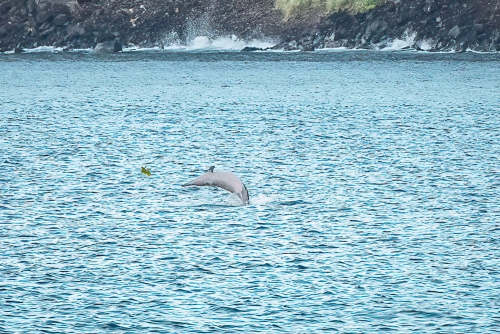 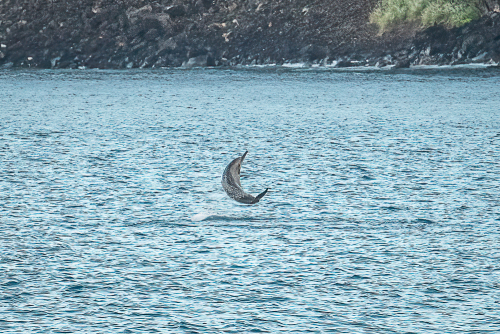 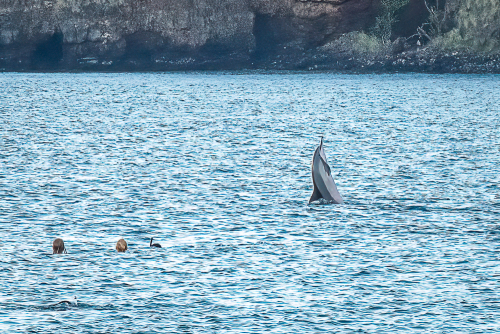 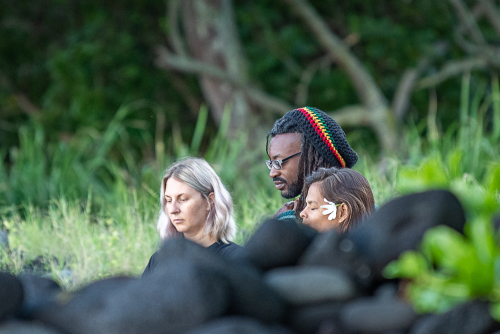 There was an unusual trio chanting and presumably "meditating" just down from where we were sitting. O-kay..... 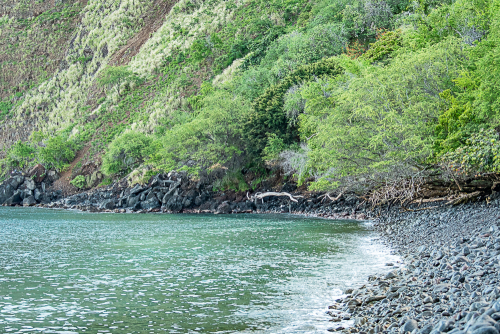 Even without the presence of dolphins, Kealakekua Bay is a serene and lovely spot. 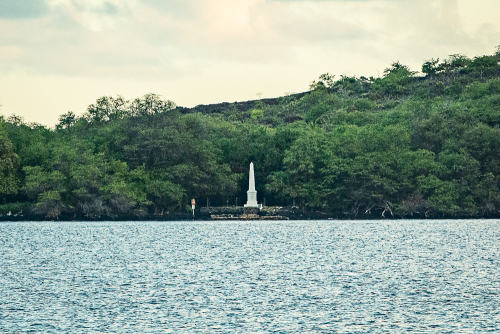 Just 1 mile across the bay on the other shore is the Captain Cook Monument. In 1779, Captain Cook was killed by the Hawaiians (an actual "X" carved into a nearby lava rock marks the exact spot where Cook died).

The British captain James Cook was one of the greatest early maritime explorers and he accidentally stumbled upon the Hawaiian islands on his way to find what is now the Northwest Passage by Alaska. At 6' 4" tall, with his white skin, strange clothing, and fanciful ship laden with iron and other items never before seen by the islanders, they thought Cook was Lono, their god of fertility. He and his crew explored the islands for a couple of weeks before continuing their journey northward. After failing to find the Northwest Passage, Cook's ship returned to the islands several months later, this time landing in Kealakekua Bay on the Big Island of Hawai'i, exactly where Hawaiian legend had said Lono would arrive.

Unfortunately for Captain Cook, unbeknownst to him his return to the Big Island happened during a time of upheaval, as the island's king and his warriors had just been soundly defeated by the people of nearby Maui. The Hawaiians were on edge, distrustful, and generally suspicious. After several weeks' stay, Cook decided to leave, but shortly after sailing the ship broke a mast and they had to return to Kealakekua Bay to repair it. As the repairs drug on for several weeks, relationships between the Hawaiians and Cook's men deteriorated. One day the Hawaiians stole a British rowboat and in the ensuing chaos to reclaim it, a Brit fired a shot into the air which led to other shots being fired. As Cook was trying to calm his men and ordering a cease-fire, he was struck in the head with a club from behind and dozens of Hawaiians pounced on Cook and stabbed him to death. The greatest maritime explorer the world had ever known was dead at age 50 in a petty skirmish over a rowboat.

The Hawaiians traditionally honored great men by scraping the flesh off their bones after they died and gathering up the bones to be buried in secret. Because Cook was so respected by the Hawaiians, his body parts were distributed among the chiefs. His head went to the king, his scalp to a chief, his hair to Kamehameha. Some of his organs, including his heart and liver, were stolen and eaten by some of the local children. Most of Cook's bones were eventually returned to his British crew, and Cook was buried at sea right there in Kealakekua Bay.

The point where this monument stands is actually British soil, deeded by Hawaiian Princess Likelike to the United Kingdom for the building of this monument. 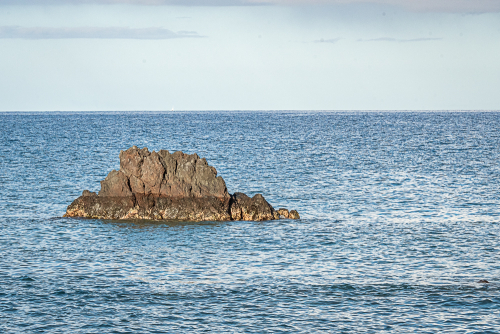 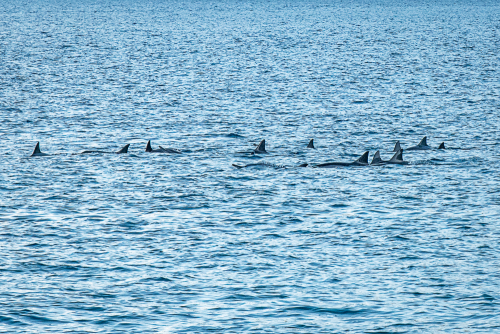 Anyway, a robust population of these graceful aquatic animals resides here and their acrobatics sure made for a very special morning for Kim and me. 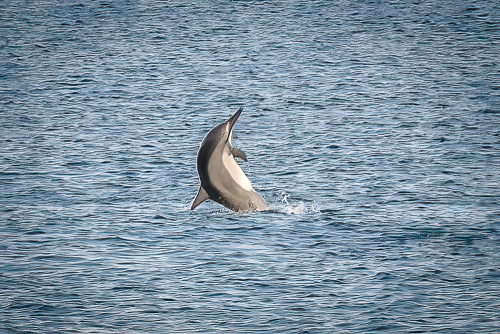 The spinner dolphins of Kealakekua Bay.