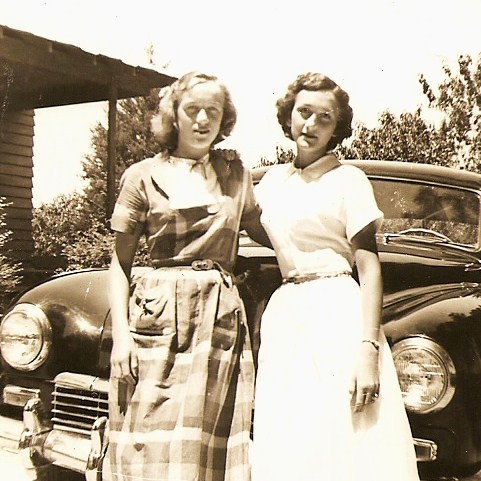 Mama's closest sister Shirley joined her in Heaven this week.

My Aunt Shirley (on the left) and Mama were partners in adventure during their growing up years on coastal North Carolina.

Mama and Shirley were born 2 years apart, siblings number 5 & 6 in a family of 12 children born to Andy and Hazel Britt. The first 2 siblings did not survive beyond toddlerhood and infancy, then twin girls (Ruth and Rachel) were born. Next came Mama and two years later Shirley. And then their sister Bernice, who is pictured in this photo with them.

Ruth and Rachel were premature babies, tiny and weak. After losing the first two children, the beautiful twin girls were such unexpected blessings and (according to Mama's recollection) were coddled a bit as young children. Then along came Mama and Shirley, two healthy and robust girls, and while Ruth and Rachel mostly stayed inside and helped their Mama with household duties, Mama and Shirley were tomboys and helped their Daddy tend to the dirty outdoor chores like chopping wood and carrying water.

Mama and Shirley grew up strong and tough in the woods of North Carolina where their Daddy worked at a sawmill. In their free time, while Ruth and Rachel pursued domestic interests and loved make-up and girly things, Mama and Shirley went on adventures together.

One thing they both loved to do was go fishing. Mama could flat cut fishing poles from sticks for the two of them, tie on homemade hooks, and they'd spend hours fishing together.

The sisters explored the woods, building little shelters from branches and even fashioning a raft like Tom Sawyer (Mama's all-time favorite book).

And they loved to go to the town dump each week and search for treasures! They'd find all kinds of goodies there, bringing home discarded True Confessions and Vogue magazines for their older sisters. One time they found an old rusty unopened can with no label. They worked to open it and the most glorious surprise was inside:  beautiful, luscious pieces of fruit in a sweet juicy syrup, the likes of which they'd never seen before. They gobbled it down, straight out of that rusty can, having no idea what it was. As it turned out, that was the first time they ever ate fruit cocktail, and to this day none of us can eat fruit cocktail without smiling, thinking of Mama and Shirley sitting on that dump pile slurping up that unknown sweet deliciousness!

The family was poor, so photographs were few and far between, but we are thankful to have a few of their growing up years... 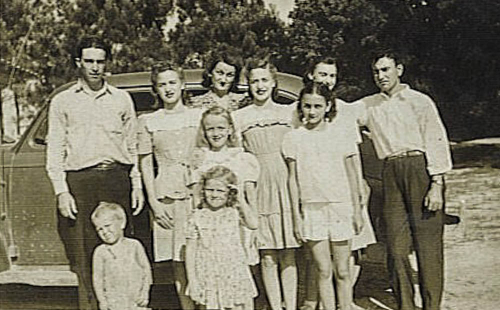 The Britt family, in 1949 (with an aunt and uncle in the photo's back right)...Andy, Rachel, Hazel, Ruth in the back row, Shirley and Lois in the middle, and little brother Earl and Bernice in front. There would be 4 more children born in later years. 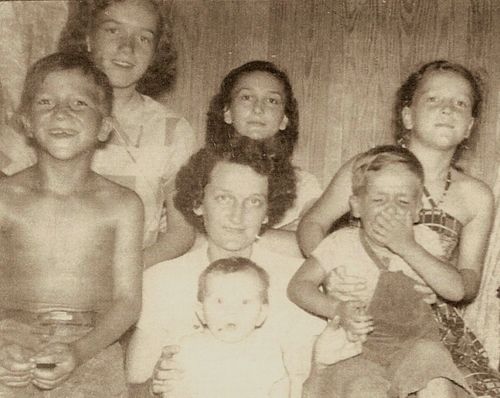 1951, Hazel with several of her younguns...Shirley and Mama are in the back. 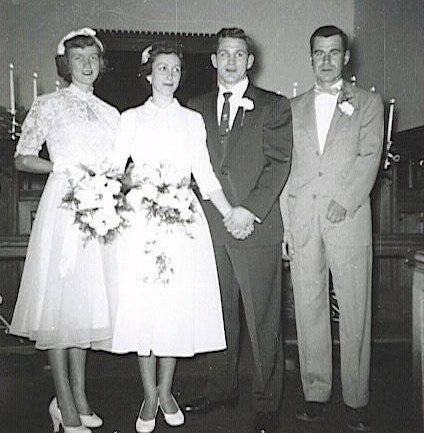 When Mama got married in January 1955, her matron of honor was, of course, Shirley. 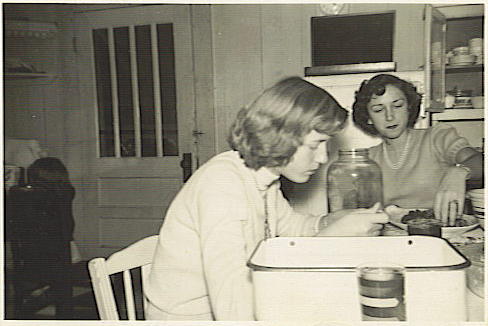 Mama and Dad moved to Indiana following their marriage. And soon after, Shirley and her husband Otis moved up to Indiana too where they lived for a couple of years. It surely must have broken Mama's heart when her best friend/sister moved back to North Carolina.

We had some wonderful times visiting Shirley and her family of 5 children when we made trips back to North Carolina a couple of times each year. The sisters wrote letters and phoned each other as often as they could, but with 9 children between them there wasn't a lot of free sister time. 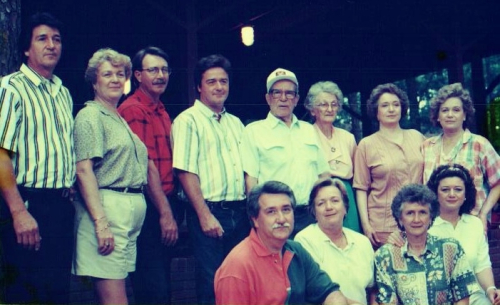 1994 Britt Reunion....I think this is the last family photo with the entire family, Andy and Hazel and all 10 children.

Shirley and Mama are down in the front (between their younger siblings Larry and Loretta), always together in photos as in life! 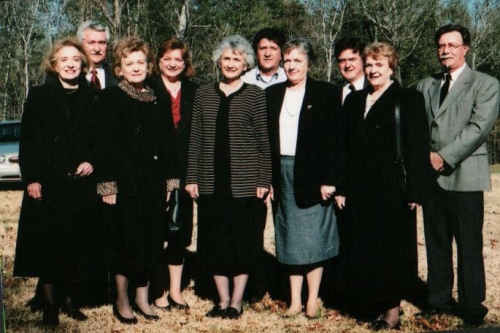 2003. The 10 siblings at the funeral as they laid to rest their daddy Andy. Mama and Shirley are together, right in the middle. Their mama Hazel was in a nursing home, suffering from Alzheimer's at that time. She passed just 6 months later. 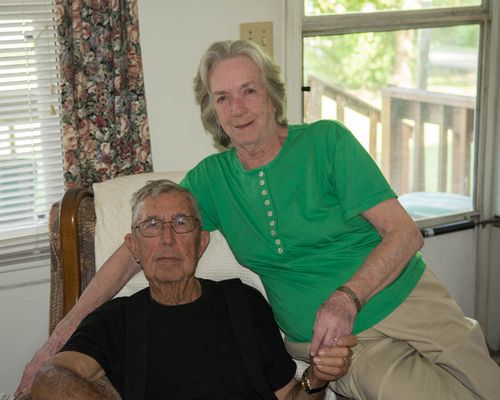 Our last real in-person visit with Aunt Shirley and Uncle Otis was in May 2016. I love this photo of the two of them! Otis passed in late fall 2019, and when Aunt Shirley lost her life's love, she lost her fighting spirit too and lived the rest of her days heartbroken. 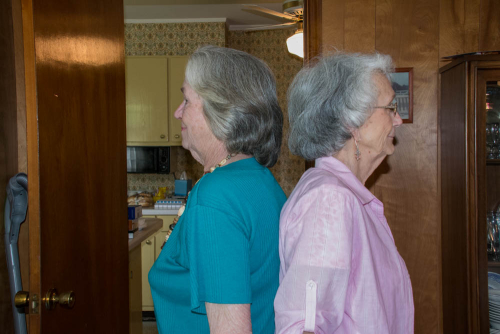 A fun sister moment in 2016...still trying to see who is taller!  Shirley on the left, Mama on the right. 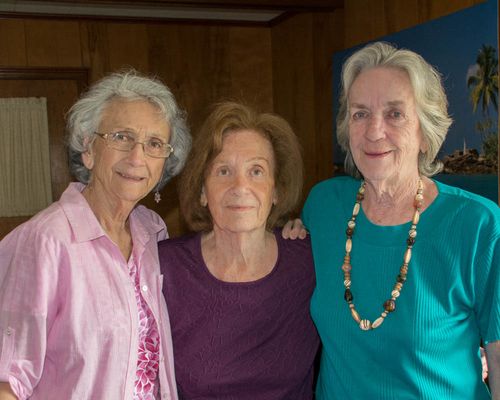 I'm so grateful for the time these three sisters had together during that May 2016 visit. Ruth had already passed 3 years prior and Rachel was failing, but they still enjoyed their sister time.

I look at this photo with a smile through teary eyes.

The four oldest sisters, along with their Mama and Daddy and 2 siblings they never knew until now...

...are together once again.