Life (and Death) in Lamar Valley 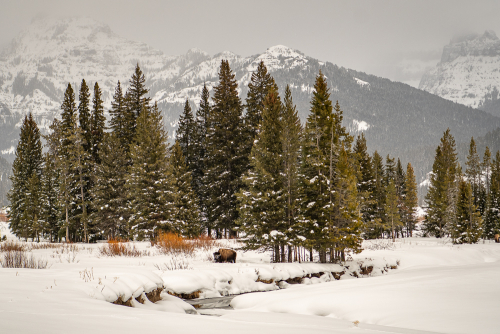 Lamar Valley, in the northern section of Yellowstone National Park, could not be more beautiful! 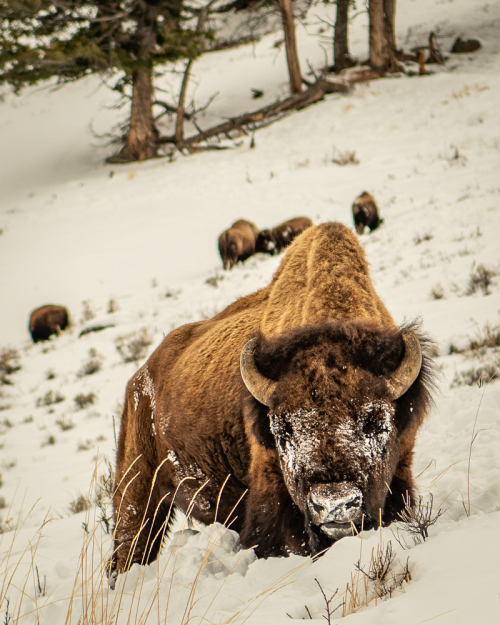 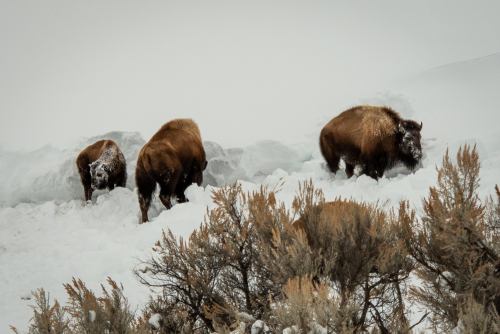 ...swinging their big heads back and forth to bulldoze paths through the deep snow to get at the grass hidden below. 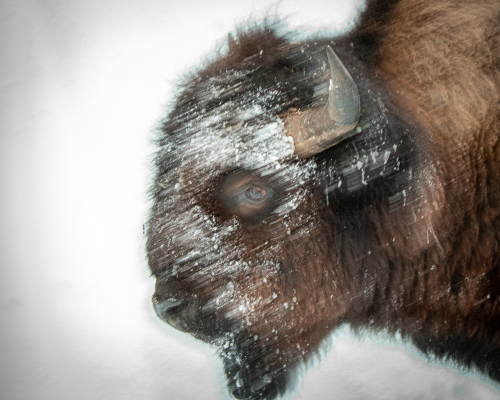 This is one of those happy accidental shots that photographers get once in awhile. One of my favorite bison shots of the entire trip...the bison was walking past our vehicle into the flurrying snow. 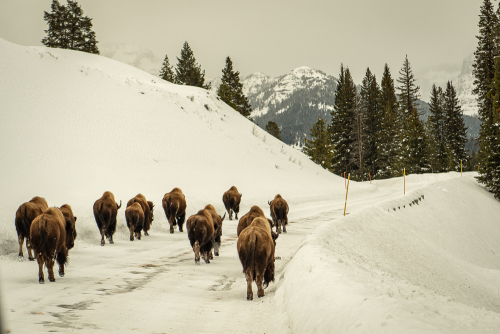 Understandably, the bison used the highways as much as we did to move from one area to another...much easier than plowing their way through the 4' snowdrifts and navigating the very steep, slippery enbankments. 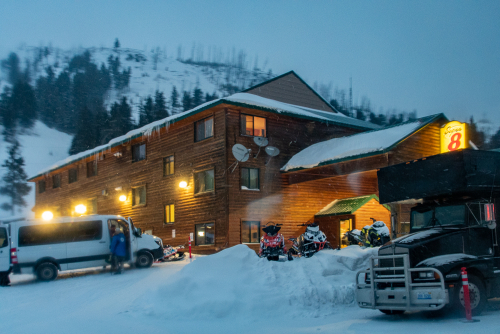 We spent two nights in Cooke City, Montana, just a few miles east of the Yellowstone Park border. NatHab is known for their top-notch guest service and accommodations, but in the town of Cooke City (it's not a "city" by any stretch of the imagination...more like a village) it's slim pickins when it comes to hotel options. So we stayed at what the guides affectionately called the Super Great. 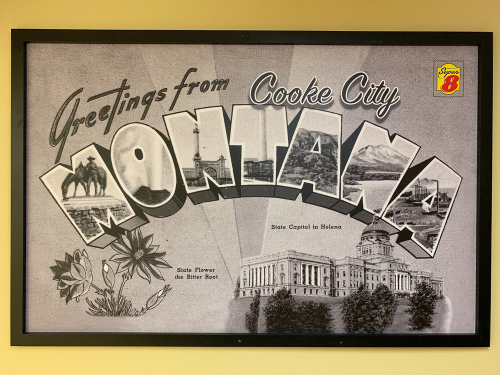 It really was fine and had a wonderful family-owned bakery/cafe/general store/snowmobile supply place next door that catered to our every food need. Super-friendly folks...and great cooks too! 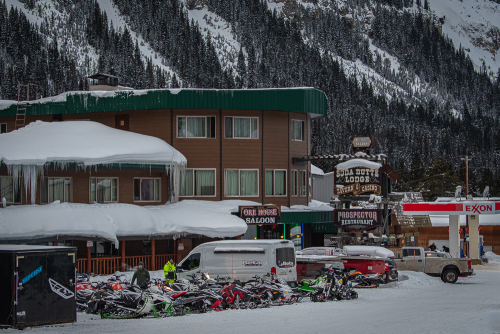 Cooke City is a snowmobilers' haven, with a whole lot more snowmobiles than regular vehicles. A few homes, a couple of restaurants and saloons, and a few sundry businesses. There is only one gas station in town, but NatHab and some of the locals are boycotting it because supposedly the owner shot and killed one of the Yellowstone wolves...a huge no-no around those parts. So if you're a wolf-lover, best not to run out of gas in Cooke City... 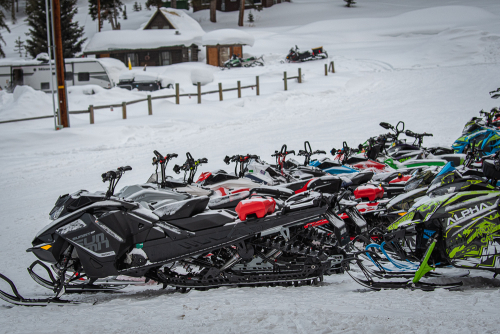 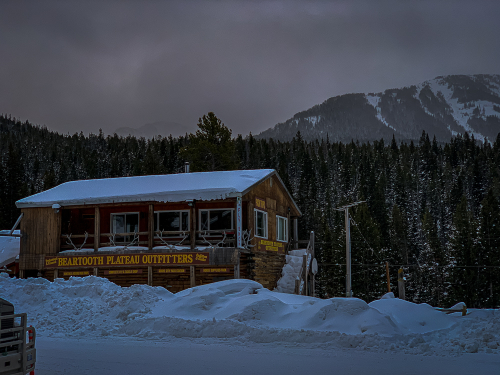 A charming little town that is buried in snow this time of year... I took this photo just before daylight as we were leaving town for the day. So. Much. SNOW. 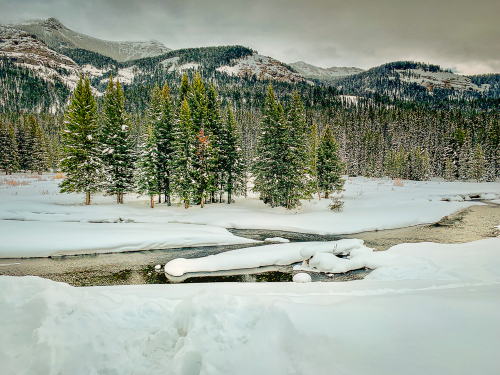 After breakfast each day, we loaded up in our vans and drove through Lamar Valley... 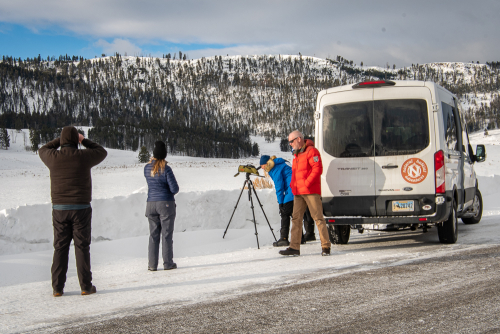 ...stopping along the way to see what God had placed in our path.

That's Kim on the far left, looking through binoculars, one of our travel mates (in the blue parka), our guide Shawn (orange jacket) and our logistics coordinator Kate (gray pants). She didn't ride around with us, but she always showed up at strategic times... 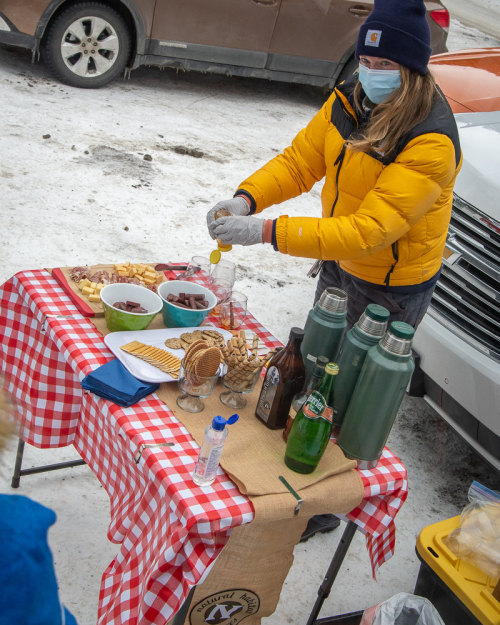 ...and we were always happy to see her.

Who serves up a charcuterie board and drinks in frigid temperatures and snow? Kate! 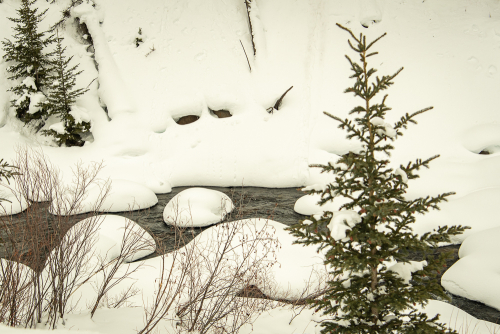 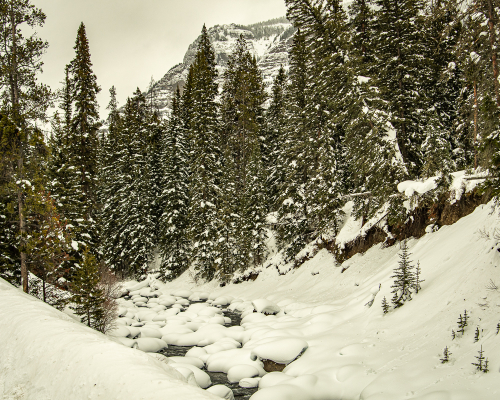 While the wildlife was unpredictable, there was no doubt that the scenery was always spectacular! 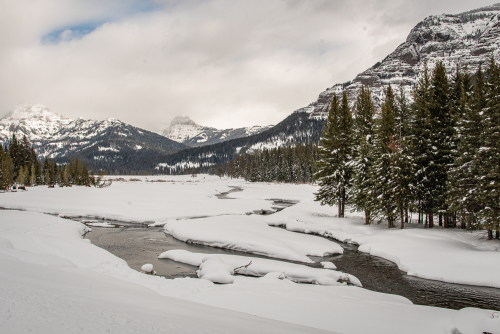 Around each corner, another postcard shot! 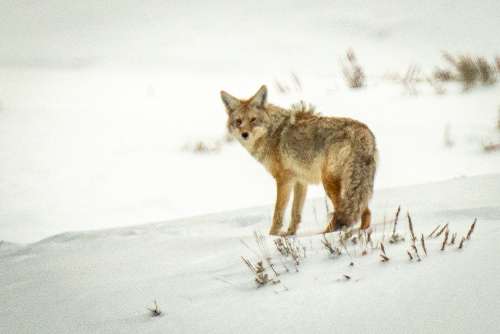 We came across this coyote not too far off the road. 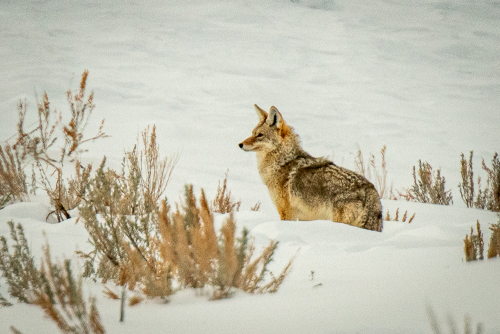 Something behind the coyote spooked it (not us...)... 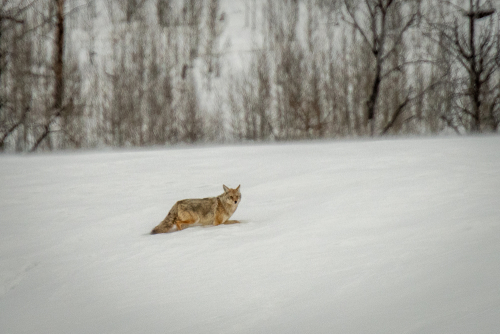 ...and it took off for the cover of the woods. 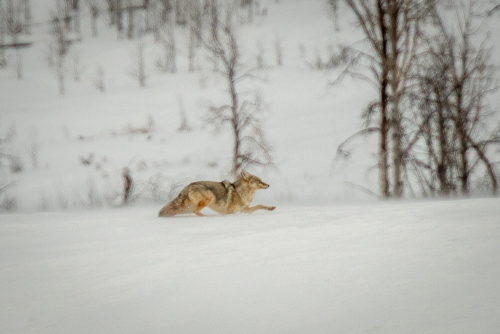 Lickety-split! Well, as lickety-split as a coyote can scramble over and through such deep snow... 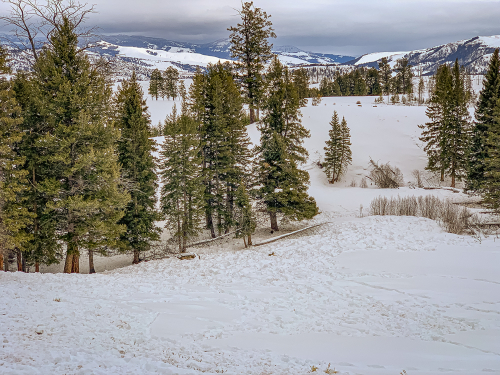 But a mile or more across this seemingly peaceful valley, in a small willow grove and streambed in the right middle area of this photo, the most extraordinary wildlife event of the day (and perhaps even the trip, as we will most probably never see anything like it again) was happening. 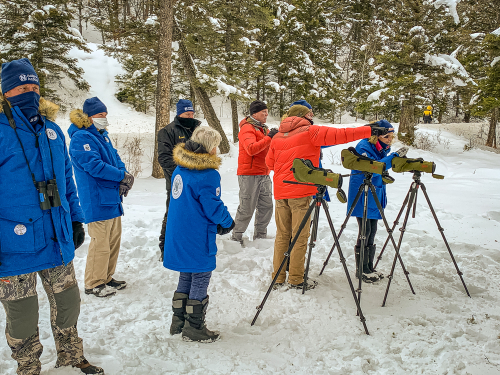 It was impossible to see anything more than specks with the naked eye, but our guides got word from the wolf groupies that the Junction pack of wolves, numbering 27 or 28 strong, had a bull elk surrounded and trapped in a shallow stream with no hope of escape. 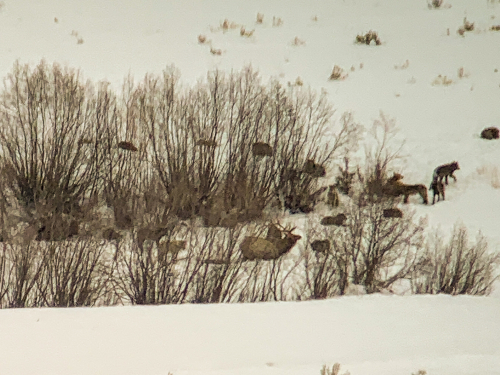 My longest camera lens wouldn't even come close to creating a decent photograph, but Shawn put my iPhone onto his spotting scope and he captured this shot for me.

We arrived about 1:30 pm and watched all afternoon, thinking the kill was imminent. But the younger pups in the pack enjoyed tormenting the elk, practicing their hunting techniques and learning to avoid the danger of swinging elk antlers. We had to be out of the park by 5:00 pm. and we were all thinking we would have to leave before the kill happened, but about 4:30 the wolves were apparently hungry and tired of playing around. They quickly moved in, took the elk down to its knees, and in less than a minute it was all over except the feasting.

Brutal, yes. But it is all part of God's plan for his creatures, a circle of life that has gone on since the world was created. That big elk provided necessary nourishment for not only that big pack of wolves, but also for the many scavenger birds and animals that would come in for the final clean-up.

Although obviously kills happen all the time, it is rare for humans to see it all unfold. Our guides emphasized to us what a special sighting we had, how very few people ever get to witness what we saw. 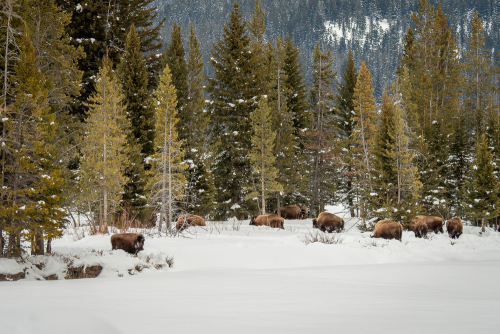 Winter in Yellowstone is brutal, and it's all about survival for all the animals.

We got to witness just a little taste of that daily struggle.

Life (and death) in Lamar Valley.

Love your stories and pictures of Yellowstone, Terry.