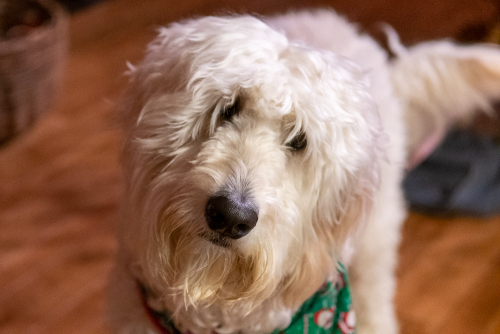 Taffy is a goldendoodle, about 5 years old, that lives in Texas... ...with her human/my brother Mark and his family.

I knew Mark was coming to stay with me for a few days.

I did NOT know Taffy was coming...Mark intentionally did not happen to mention it to me until he was almost here.

Kim and I like animals just fine, but we do not like them in our home. In our 40 years of marriage, we've fed and cared for lots of animals, but they've (except for the occasional aquarium fish, which I also prefer not to have) always lived outside or in the barn. That's how we were raised...people inside, animals outside. I could (CAN!) barely keep my home cleaned up from its human occupants, I certainly don't need an animal to make more messes for me to deal with.

Mark was very well aware of my "No Animals in the House" policy. But he brought Taffy anyway.

Because that's how my little brother has always operated and usually gets him what he wants...persistently and subtly wearing people down until they eventually cave. I've fallen for his tactics for 53 years now and can attest that he has mastered this technique.

So Mark shows up to Indiana in the middle of December with his lap dog that is used to Texas temperatures. Adamant about sticking to my guns, we cranked up the heat in the garage and cleared out a spot for Taffy. She would be warm enough and perfectly comfortable in the garage.

Mark did not complain about the arrangements at all nor did he beg me to let Taffy in the cabin. But, just like he did our entire childhood, Mark charmed/guilted/manipulated me until he got what he wanted...the next morning after their arrival, I let Taffy inside. 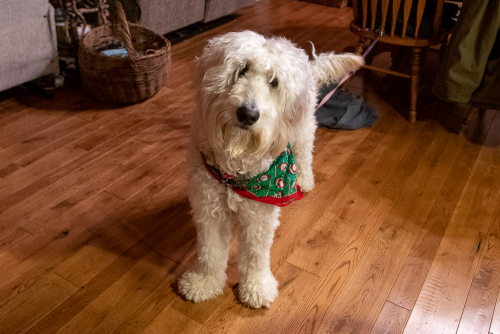 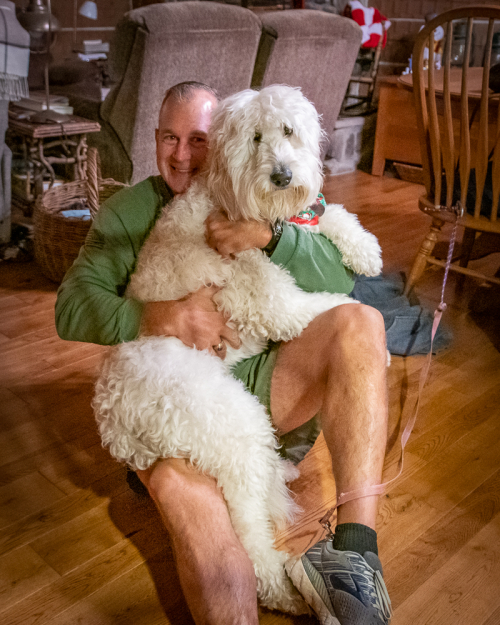 And Mark obviously adores her!

Taffy was well-behaved and did not cause any trouble for me. I'm sure Mark read her the Riot Act before she came inside. I told Taffy myself that the reputation of all inside pets was riding on her fluffy white shoulders. But she was a good dog and I might have even petted and snuggled her a little bit. 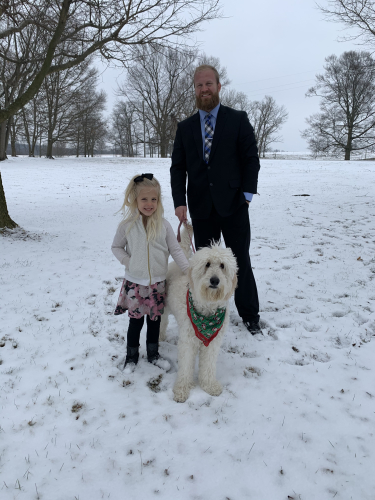 Taffy even attended Mama's funeral...she did stay in Mark's car. But our family animal-lover Juni (with her daddy Kamaron) was quickly enamored with Taffy.

It was the first time Taffy had seen snow. Mark told me that on the drive up, Taffy woke up from napping while Mark was driving through some heavy, fat-flaked snow flurries in the dark, which we all know is mesmerizing to see in the headlights. Taffy began bouncing around the little car, barking in excitement...she had no idea what was going on outside the car. While she was here, she had fun romping in the snow when Mark would take her out for potty walks. 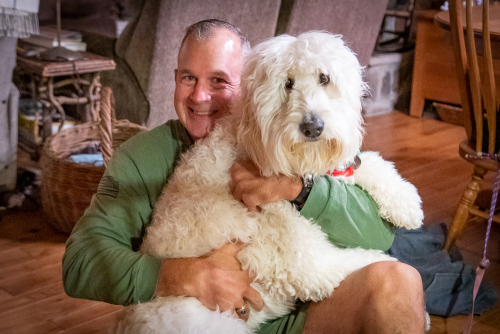 Taffy was a good guest and I would welcome her (reluctantly...) at my house again. She's a sweet dog (as dogs go...) and Mark obviously thinks she's the cat's meow.

Doodles can sneak right into your hearts, just like ornery little brothers! I know a thing or two about both. lol

I'm glad she was a good guest.

Mom, I can't believe you made a post about a dog let alone let Taffy inside the house!