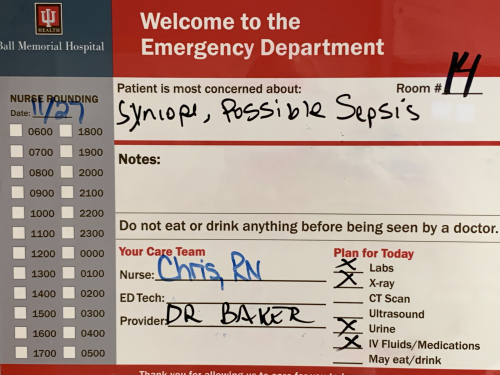 A wise person once shared this phrase with me, and it's become one of my favorites:  Be careful or you might learn something new each day.

File this lesson under "Things I Didn't Want to Know"....

On Friday I got a call from Mama's long term care facility...they had called the paramedics to take her to the hospital as she had, without warning, suddenly passed out on them.

Which, as I later learned, is referred to as a syncopic episode. Her blood pressure bottomed out for no apparent reason and her whole body went into a state of chaos. And that set into motion one of the craziest emotional-roller-coasters of an evening that I can ever remember.

I jumped in the van and headed to the hospital. Of course, the Covid restrictions kept me from just walking in but since Mama is unable to understand/answer questions/advocate for her health now, the receptionist called back to ER to see if I could go back to be with her. "They are still working on her," she said, giving me the ER nurses' station number and telling me to wait in the parking lot for the ER to call me. I was not alarmed at that time, assuming she had just arrived and maybe not in a room yet...but as my former-paramedic sister later pointed out, the phrase "working on her" used by health care folks is never a good sign and points to trying to keep a person alive. Sometimes ignorance is bliss...yet another lesson I wish I hadn't learned...

Five minutes later, the ER doctor called me and I could sense the urgency in his voice. He believed Mama to be in the middle of a major heart attack (after that, my mind started racing ahead and the next words were kind of a blur...), they were sending her via lights-and-siren ambulance to another nearby hospital as they didn't have the equipment needed to treat her and save her life (!)...this is very serious...I'm so so sorry. (I remember those last four words vividly!)

My head was spinning, my heart was racing, and I called my sister Barb as I followed the ambulance to Ball Hospital. Barb, with her husband John, was already en route to relieve me and be with Mama in the original ER, but it is a 2-hour drive and they were only halfway here. I prayed all the way to the hospital, that Mama would not be frightened or in pain, that God would cover her with His peace and His will in her life be done. Mama is a believer and God loves her even more than we do, so I am confident where Mama's eternity is and it is certainly much more desirable than what she is living now. But although I was selfishly not ready to let her go just yet, as I drove to the hospital I prepared myself mentally for just that.

Arriving, the parking lot was nearly empty due to the strict No Visitors policy. Once more I pulled the "severe dementia" and "medical POA" cards with the front desk to earn my way back into the ER, fully prepared (I think I was...) to find Mama unresponsive or perhaps even already gone. What a complete SHOCK to see her sitting up on her elbows in the bed, blinking her eyes and looking all around like a newborn baby! I was incredulous! She knew who I was right away but she didn't know where she was or why she was there. Immediately the cardiologist talked to me about her treatment, whether to do the heart procedure where time is of the essence in the event of a heart attack. But the doctor was not convinced that Mama had indeed had a heart attack, as each consecutive EKG they had done looked more and more normal. Mama was completely conscious and in no pain. He said that if Mama were having a heart attack she would be having chest pains or at least heaviness, but she said she didn't hurt anywhere.

WOW!!! I called my sister who in turn called our other siblings Maria and Mark, and we all were just totally stunned by the turnaround! I still am. God purpose and plan for Mama on this earth is not complete and He is not ready to take her Home just yet.

Explanations??? How could she go all syncopic on us just like that?! They ran a slew of tests that night (and she's still in the hospital undergoing more testing and awaiting results) and discovered that her white blood count was significantly elevated, indicating an infection in her body. As on the white board, they initially suspected sepsis but now it's looking more likely a urinary tract infection. After 3 days on antibiotic, her white count is back to normal and she's acting much more like herself. She will probably be going back to her home at Glen Oaks today, and we are eager for her to be back in familiar surroundings. 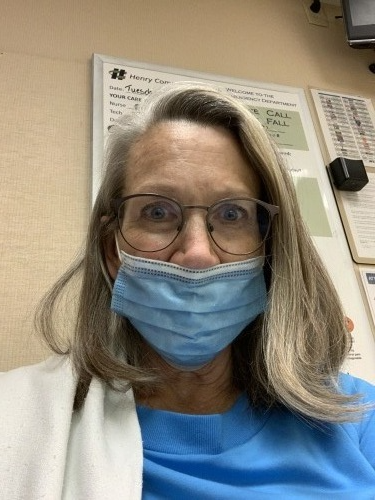 Been spending WAY TOO MUCH time masked up in hospitals these past few days (and months!), learning way too many new medical things that I'm just as happy not to know.

I'm hoping we don't get any more experience with the latest of these...