Thanksgiving of the Plague 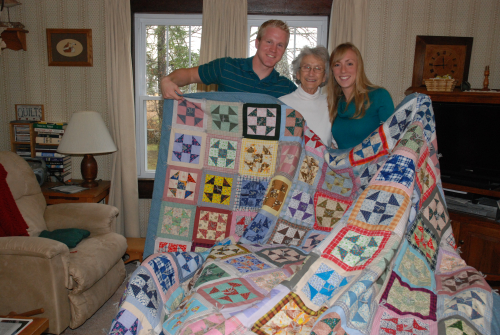 This photo of Mama gifting a quilt to Kamaron and Anique was taken ten years ago, one of the few happy moments from Thanksgiving Day 2010.

Aka in the Gray family as the never-to-be-forgotten Thanksgiving of the Plague.

While Covid 19 is certainly wreaking havoc on everyone's Thanksgiving plans this year, it's not the first plague to mess up the holiday for us. While we can laugh about it now, 10 years ago it was no laughing matter. At. All. Whenever I'm asked to share a Thanksgiving memory, this one always comes to mind...it will live in infamy in the Gray family.

Let me set the stage for you:

Kristoffer and Dana had just moved back to Indiana from Minnesota in October 2010, and we were all (the twins were not yet born...so the 4 of them and Kim and I) living together in what is now their house while our cabin was being built. Emily and Zach were living in Fishers, Kamaron and Anique were living in Kansas City, and Kyler and Kara were finishing up college and engaged to be married.

I was SO EXCITED that everyone would be back home for Thanksgiving! I hadn't gotten used to the idea of my family being so scattered, and was so looking forward to a long fun family weekend together. We had plans for a big Thanksgiving Day dinner at Mama and Dad's farmhouse and then the Gray family celebration on Saturday. I couldn't wait for everyone to arrive!

And then, our well-made plans began to disintegrate...

On Wednesday, 2-year-old Karter without warning vomited and as Dana was helping him she threw up too. It came on suddenly and VIOLENTLY! They were miserable and spent the rest of the day in the bathrooms, bouncing between vomiting and diarrhea. Kara had come over that day to be with Kyler, and that evening (we found out later) it hit her like a freight train...she ended up spending most of her night lying in misery on her bathroom floor at home.

Meanwhile on Wednesday, Kamaron and Anique were making the drive home and I mentioned that Dana and Karter had some kind of bug, maybe food poisoning considering how quickly and violently it struck. Kamaron said no worries, they were on their way...

By Thursday, all 4 of Kristoffer's clan was out, as well as Kara. Still thinking it must be food poisoning and thankful that we had avoided it, Kyler and Kim and I, as well as Emily and Zach and Kamaron and Anique, went to Mama's for Thanksgiving. It was a good time, although a smaller group.

Friday was not as good of a time. Kamaron woke up violently ill and spent most of the day (when he wasn't in the loo) sick...and angry that he was sick. Kyler and Emily succumbed to the plague too, although neither of them were quite as sick as some.

The only redeeming quality of the plague is that it only lasted about 24 hours. Quick but very potent!

By Saturday, everyone was feeling better...except for Anique and me. I was thinking we had escaped the virus, but I was oh-so-wrong. We stayed home, each of us close to our own toilet, while everyone else went to Kenny's for the Gray Thanksgiving feast.

Of our family of 12, Kim and Zach were the only ones who never got the plague. The other ten of us experienced a Thanksgiving that lives on in Gray family infamy. We laugh reminiscing about it now, but 10 years ago there was nothing funny about it at all.

We shall never forget the...

...Thanksgiving of the Plague.

That memory serves to remind us that perspective is everything. We may be apart, but we are healthy & if something does hit, we can rally!
Hugs

The day lives on in infamy. I can’t think of a time I've been more miserable. Thanks for the reminder of this wonderful thanksgiving memory 🤣