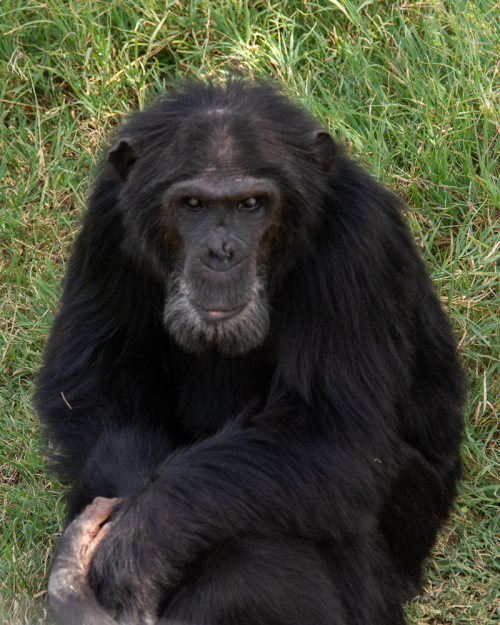 Chimpanzees are not native to Kenya.

So all of us were a bit skeptical about the appropriateness of a chimpanzee sanctuary in the Ol Pejeta Conservancy, but still we wanted to check it out. 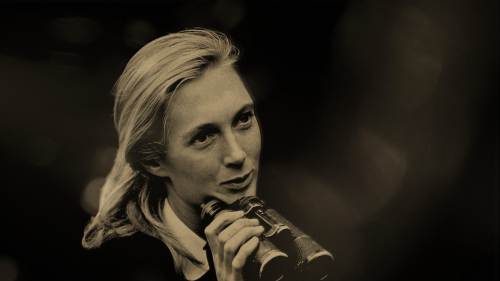 The sanctuary, for chimpanzees rescued from the black market, was founded by famous ape researcher Jane Goodall and was originally located in the African nation of Burundi.  But in the 1990s, when civil war erupted in Burundi, Ms. Goodall relocated her sanctuary to Ol Pejeta. 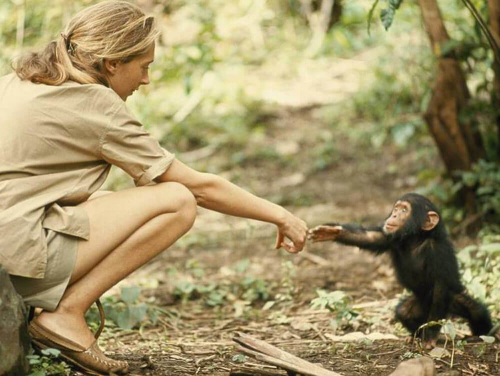 Adult chimpanzees were (and still are) killed for their meat or to intentionally orphan baby chimps, which are then sold as pets on the black market in other parts of Africa.  Ms. Goodall and her colleagues began rescuing these traumatized chimpanzees and created a refuge for them to live.  Because of their past intervention by humans, it is doubtful they would be able to survive on their own.

There are 36 chimpanzees now living in two separate "family" groups separated by a river inside the Sweetwaters Sanctuary. 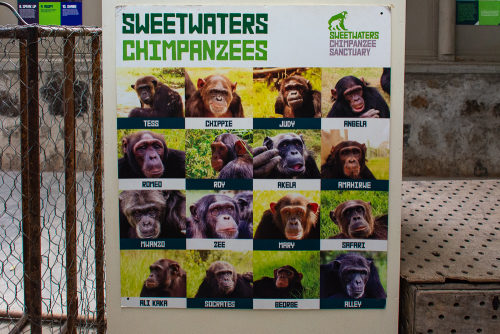 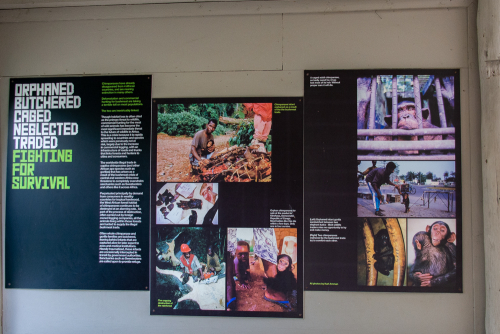 Because of their mistreatment by humans, these chimps are not only scared of people but also can be very dangerous and violent towards them.  So this is certainly not a petting zoo! 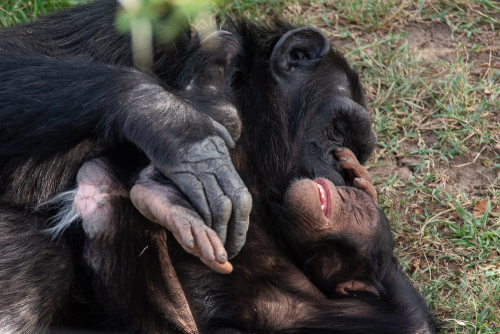 The two enclosure areas are very large and jungle-like, so we were fortunate to get to observe a few of the chimpanzees very close to the observation deck. 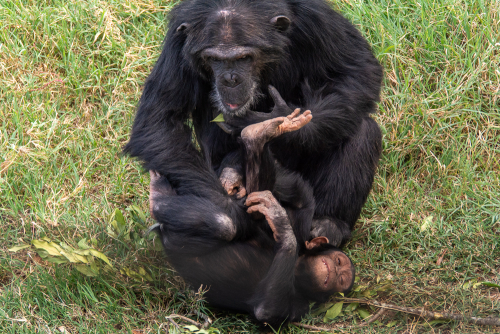 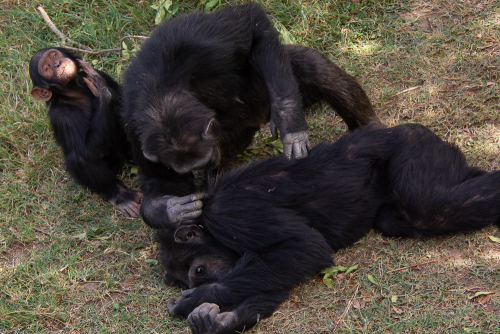 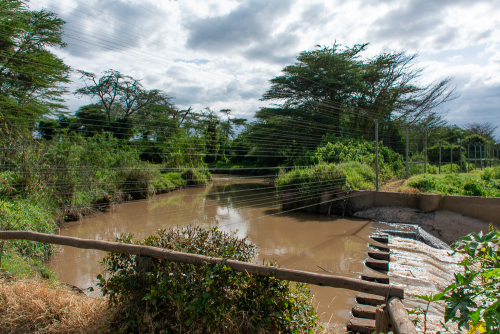 This river and electric fence separates the two groups. 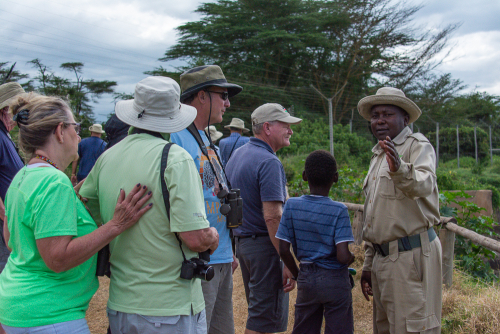 Our guide and our group.... 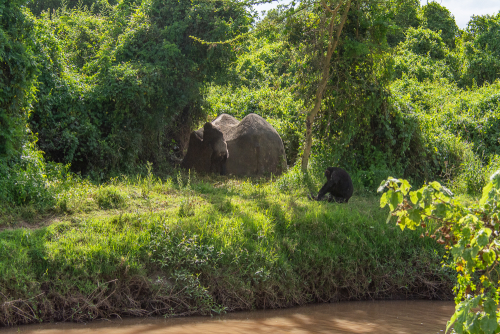 Across the river, a couple of chimpanzees... 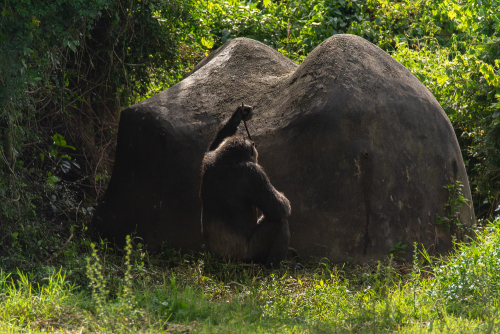 This rock is artificial and has holes drilled in it with jelly containers inside.

Chimpanzees are very smart and poke sticks in the holes and pull them out to eat the jelly. 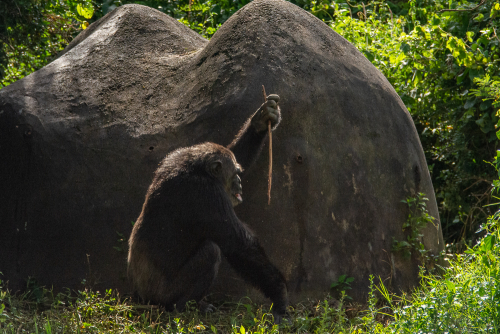 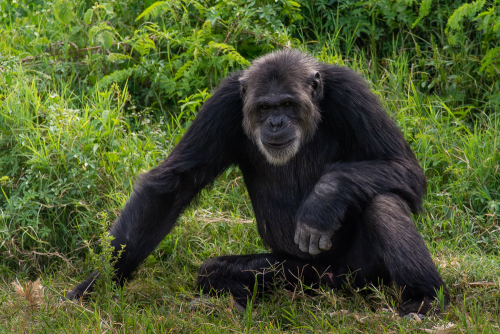 The old bossman of the family keeping an eye on us... 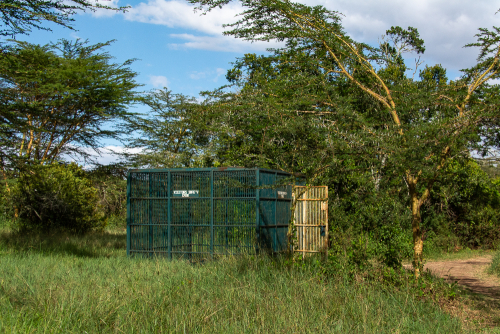 Despite the electric fence, occasionally a chimp will get out.  The guide told us that the group of chimps will even work together and use sticks to separate the wires on the fence to let another one jump through.  Very intelligent problem-solvers!

If that happens when there are visitors, this cage is where the visitors are to go to stay safe until the chimp is back inside the enclosure. 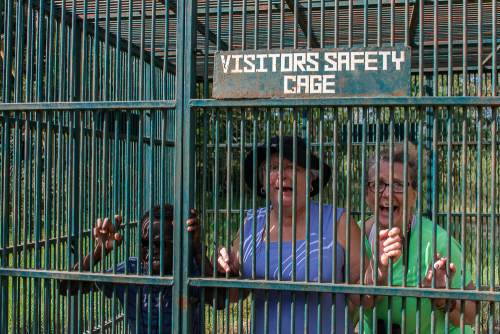 YIKES!  Those are some wild visitors in there!

Apparently, visitors have sometimes been trapped inside for hours as the chimpanzees will just climb on top of the cage and try to wait it out.  The chimps are often very hard to coax away...I guess they sense an opportunity for revenge on humans.  Very strong and powerful animals...we are definitely no match for a violent chimpanzee! 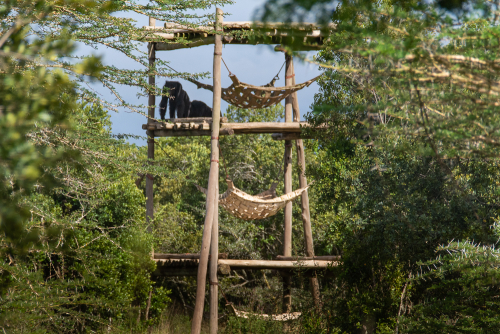 While it's hard for me to justify so much money spent on chimpanzees while human babies in Kenya are being abandoned and not cared for, I did change my attitude somewhat toward the sanctuary.  I know they are just animals, but I hate seeing any of God's creatures being mistreated.

Ms. Goodall is now in her 80s but still oversees the sanctuary and visits it a couple of times a year.  I learned a lot...about both people and chimps...

...at the Sweetwaters Chimpanzee Sanctuary.