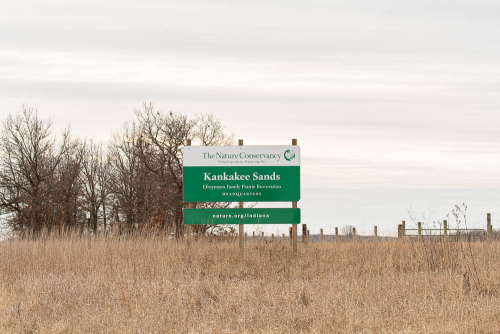 Sometimes you find what you're looking for, sometimes God has other plans.

I follow some Indiana birding groups and I'd been reading about a group of 6 whooping cranes that had been hanging around with some sandhill cranes up in northwest Indiana for a few weeks.  I had a hankering to see them for myself, so my fellow friend and photographer Gerri and I set out early Wednesday morning for the 2 1/2-hour drive north to Kankakee Sands Nature Conservancy in search of whooping cranes and bison (there is a supposedly a large herd at Kankakee) as well as sandhills. 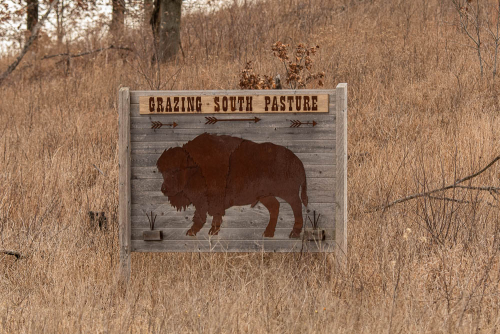 Despite driving the perimeter of the reserve, this is the closest we came to a bison. 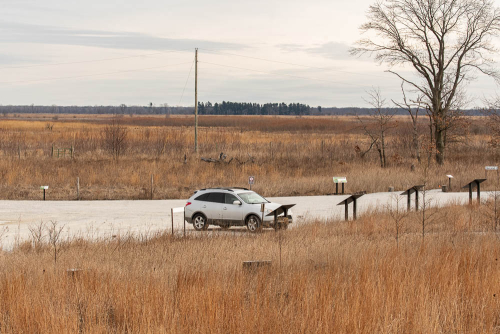 We had to fight for a good parking spot.... 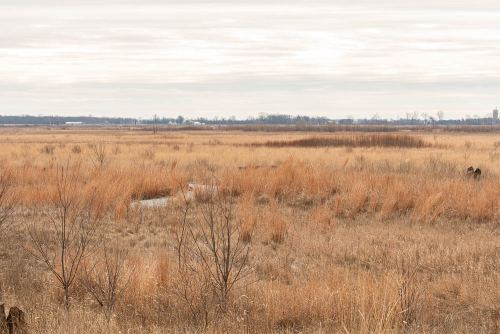 We walked to the top of a couple of ridges to get a better view.

No bison to be seen.  You'd think an animal as huge as a bison would be easily visible, now wouldn't you?  (No, those are dark stumps...at first, they fooled us too...) 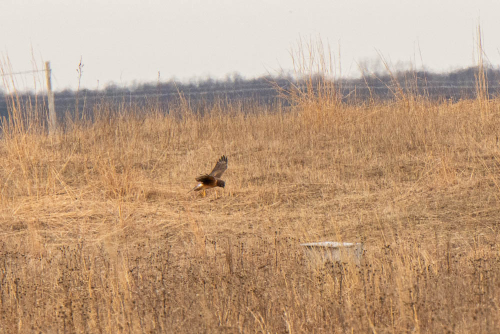 And the only bird life we saw were several hawks hunting on the prairie, not even close enough for us to snap a decent photo. 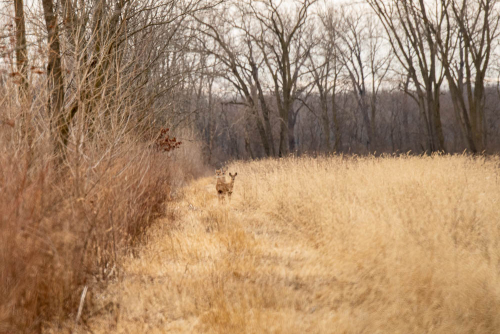 Although we did see a few lovely deer as we slowly cruised through the conservancy... 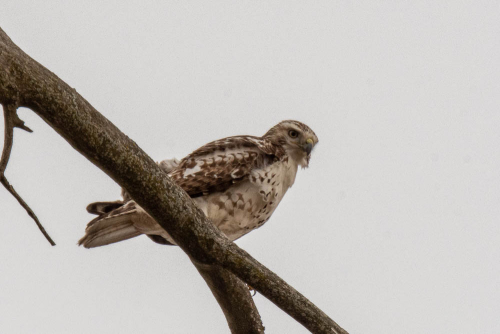 And several hawks along the way.

Okay.  So no bison today.  But we were undaunted, still feeling hopeful that we might find the cranes. 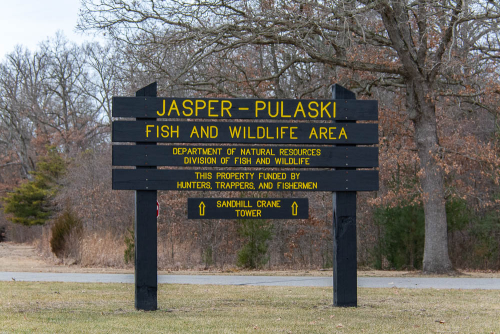 After a nice lunch, we drove several miles east to the Jasper-Pulaski Wildlife Area.  I was SURE we'd at least see sandhills there!  The one other time I was here Kim and I saw thousands of them from the dedicated sandhill crane tower. 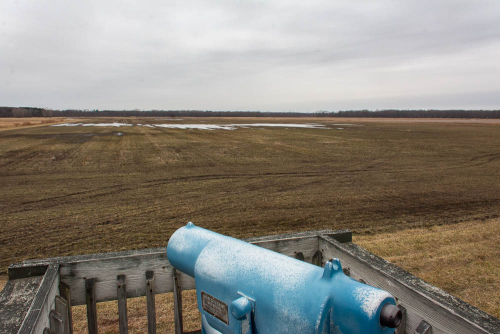 But not today.  Nary a crane in sight nor could we hear any at all.  Total silence and we were all alone scanning the fields in all directions with our binoculars for several minutes, until a beat-up white van drove up and parked.

Before Gerri agreed to go with me, I had already decided I was going alone if no one else was able to go.  At this moment, I was very glad I was not alone.

It has been my experience that very serious birders can be a bit eccentric and a little on the nutty side, and Crazy Crane Man did nothing to dispel that notion.  He climbed up onto the tower with us and exclaimed, "Where is everyone?!"  Our thoughts exactly...where were all the sandhills???  As he began talking to us, he quickly gained his new moniker as he told us he'd been tracking the 6 whooping cranes for the past week or so but couldn't find them this morning.  But what struck us most is that he called them by name (they are wearing bands to identify them)..."8-17" and "16-11" and such...he had the name, gender, and stats for each one like they were part of his family.

Although he doubted we would have any more luck than him finding the elusive group of whoopers, he did point us in the right direction a few miles down the road to "the corridor they've been working."  And assured us there would be plenty of sandhills around that area.

We were a little worried he might follow us, but he got distracted by a hunting hawk and we left him and his old white van behind and headed toward Wheatfield. 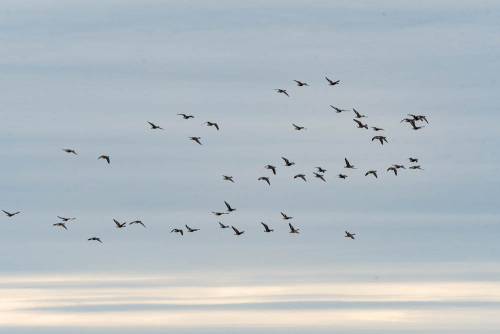 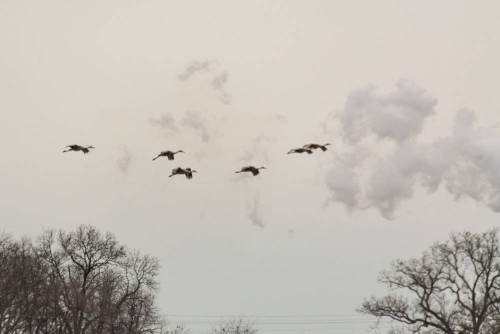 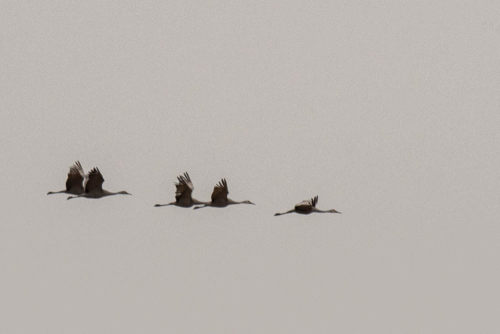 Now THAT'S what we're looking for!

And once we started seeing the sandhill cranes, they were EVERYWHERE! 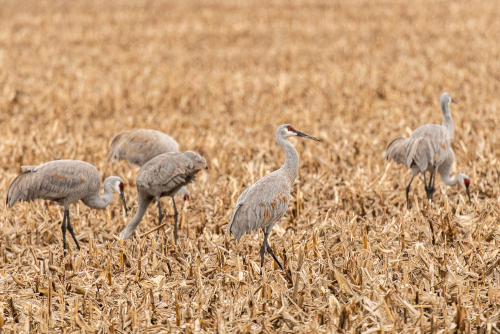 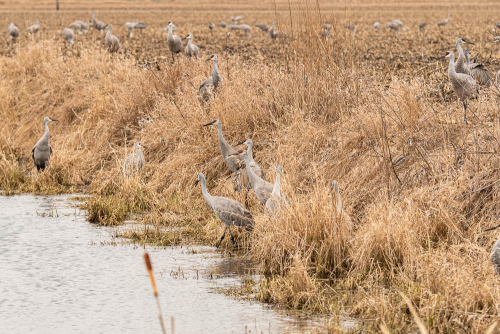 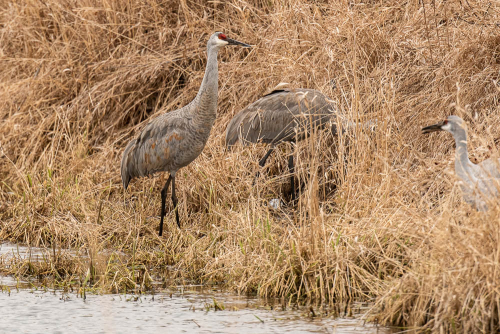 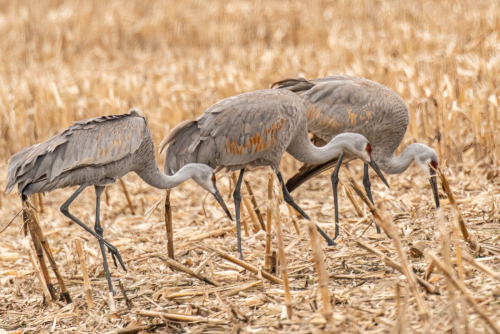 While we were thrilled to see so many sandhill cranes so close up, alas 16-11 and company were nowhere to be found amongst them. 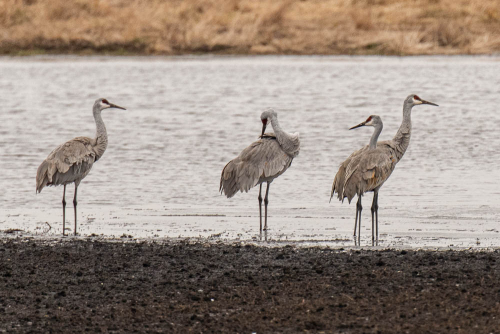 We drove around "the corridor" a couple of times before deciding it was time to head home. 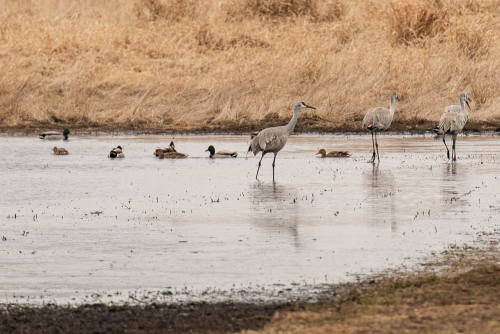 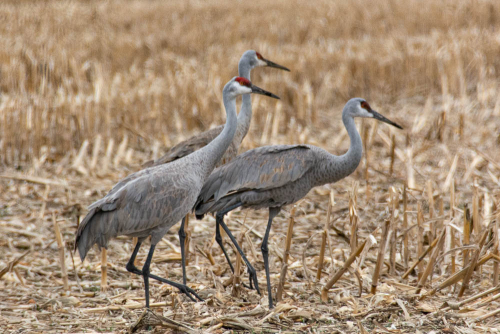 Such is the nature of wildlife photography.  I have to remind myself often that those award-winning National Geographic photos are usually the result of several days if not weeks or months of waiting and searching by wildlife photographers much more experienced and skilled than me.  That's what makes them so special! 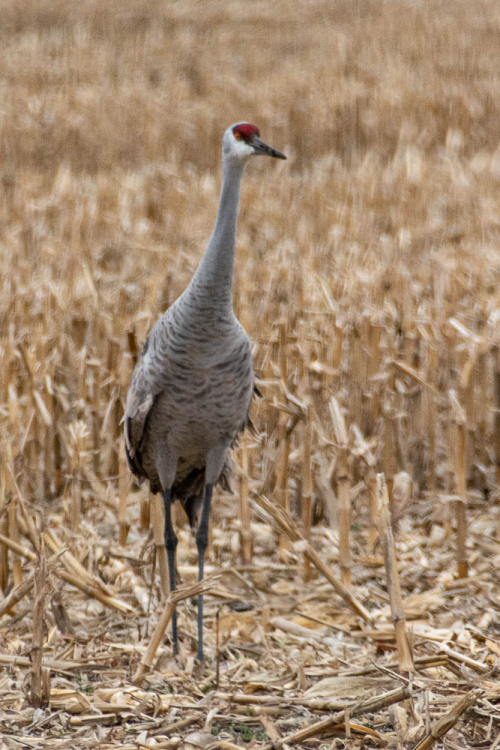 But oodles of sandhill cranes plus a day spent with a dear friend is not a bust by any definition.

It was still a great day.