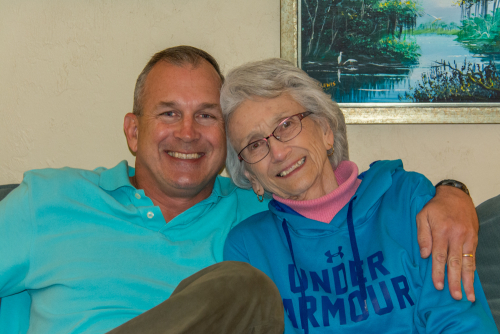 My brother Mark (pictured here with Mama back in February) was an incredible athlete, both at Hagerstown High School and also at the United States Naval Academy. 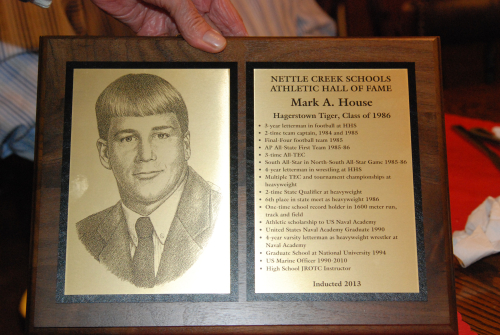 In 2013, he was inducted into the Nettle Creek School Corporation Hall of Fame for his many athletic achievements.  My sisters and I totally take credit for making him tough, and it's served him well both athletically and during his 20-year career in the United States Marine Corps.  He's still tough...just ask his three kids as well as the hundred-or-so student cadets that he teaches as head of the JrROTC program at New Braunfels High School near San Antonio, Texas. 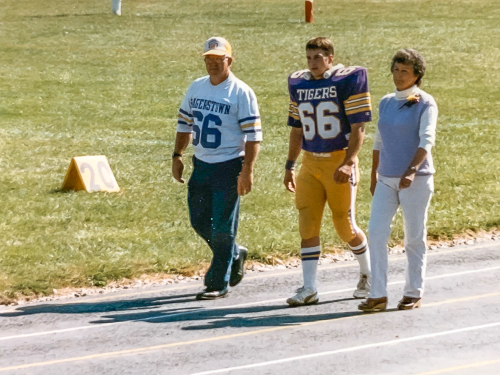 Reminiscing about his high school glory days, here is a photo from fall of 1985, being introduced at Senior Night and escorted by our parents.

Mark was one of the captains of the best Tiger football team to ever take Cory Field before or since, losing at semi-state on the home field of the eventual state champion in one of the nastiest football games I've ever witnessed.  It was freezing cold and snowing at times, the field nothing but a pile of mud.  Shoulda, coulda, woulda...anyway, that game was their only loss of the year.

Yep, it's been 34 years and I still can't believe that game.  But I guess that's the stuff sports legends are made of. 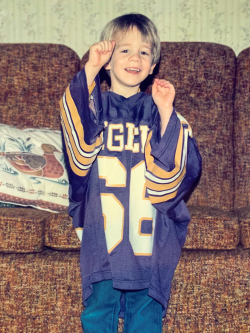 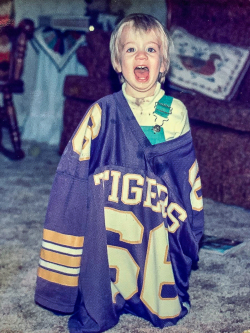 We were living in Shenandoah Raider territory that year, but with no real ties to Shenandoah yet we were still Tigers through and through.

Kristoffer was 3 and Emily just over a year, proud to don Uncle Mark's jersey just before the sectional final between two highly-ranked teams Shenandoah and Hagerstown.  The Tigers got the best of the also-undefeated Raiders that year. 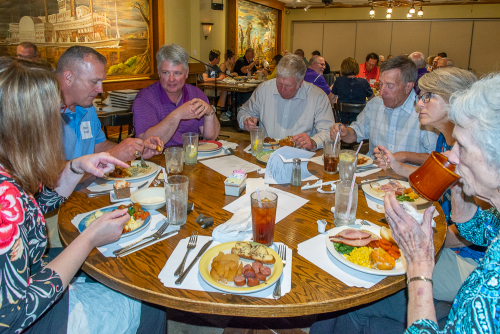 Fast-forward 34 years to a couple of weeks ago...the Hagerstown Tiger football teams of 1982 & 1985 were inducted into that same Hall of Fame.  And Mark flew home for the weekend celebration banquet.

Mark is sitting between his teammate Craig and Craig's wife Lisa, Kim beside Craig, my sister Barb and her hubs John, Mama, and I...enjoying dinner and catching up before the presentations. 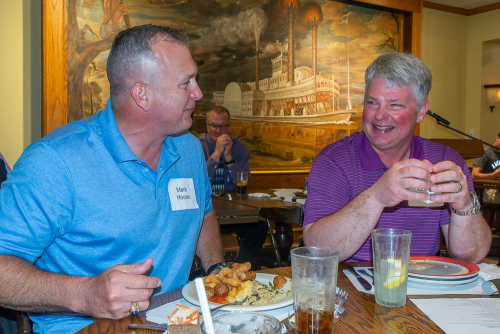 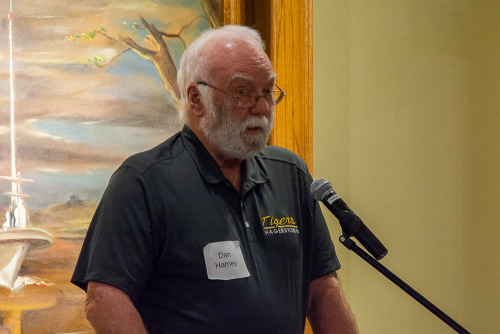 I never did quite figure out who Don Harney is, but I'm presuming he's either a sports writer or a fanatical area sports fan.  Either way, in introducing these two past Tiger teams he had lots of great things to say.  Not the least of which that Mark is the "gold standard" for high school linebackers.  That's a very nice compliment! 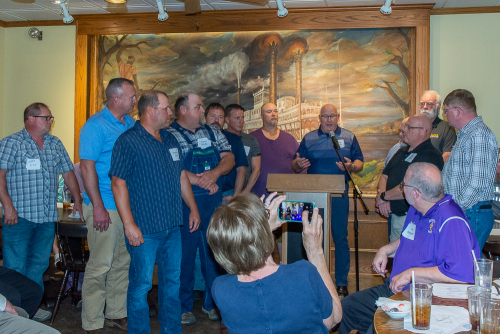 First, the 1982 Tiger team when Mark was a freshman.

Here's a Mark story for you (I hope I remember it correctly...I was gone from home when all this happened):  Hagerstown had a freshman football team at that time, but Mark had set his sights on playing varsity.  So in August, when those dreaded 2-a-days began, Mark would show up at practice and sit there and watch.  After a couple of days, Coach Kinsey finally asked him if he wanted to join them on the field.  And that was how my brother wormed and charmed his way onto the varsity squad while the rest of his classmates were playing on the freshman team.

Mark has never lacked for stubborn persistence.  Or persistent stubbornness.  Both apply.  In spades.

My cousin Bill, who was a year older than Mark, was also on that team.  He's halfway back sporting the mustache. 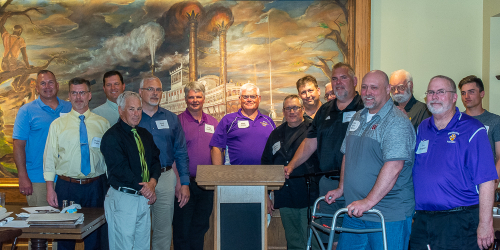 But the grand finale (for us, anyway) was the induction of the 1985 team. 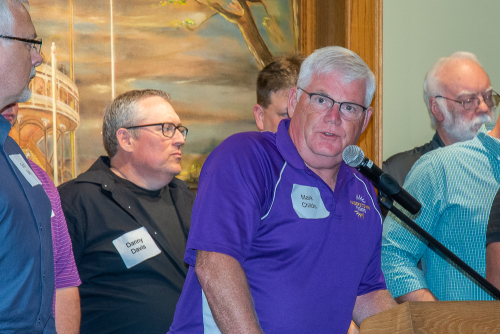 They had a young whippersnapper of a coach named Mark Childs, who would continue to coach several more years before becoming the dearly loved principal of Hagerstown High School for many years to finish his career. 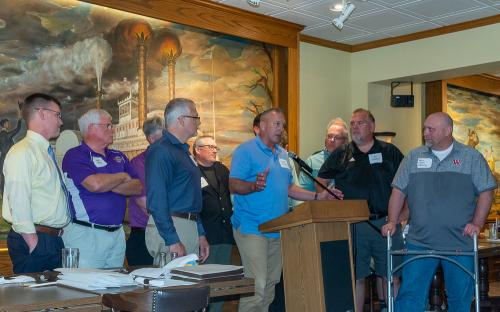 Mark was one of 3 senior captains, each of whom had an opportunity to share a few thoughts. 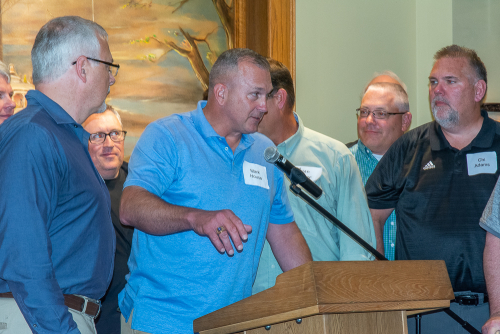 Mark said he thought he was coming to reunite with some football buddies but he found himself surrounded by old men. 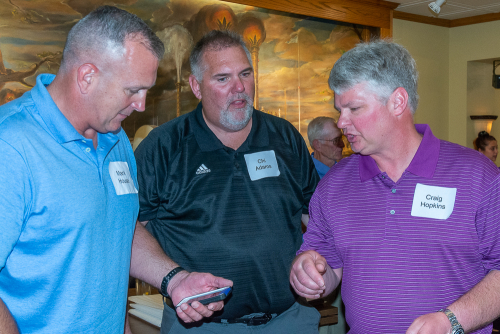 Trading phone numbers so these teammates can stay in touch... 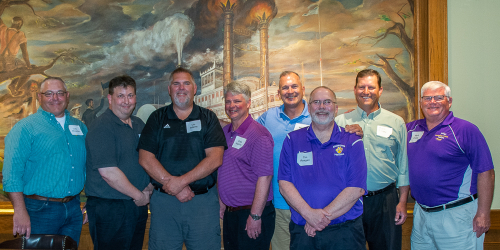 Coach Childs with a class of seniors that he'll always love and never forget.  Coach had everyone stand up ("even those Shenandoah folks" he jokingly said to us) and led the crowd in a rousing rendition of the school song.  It's been years since I sang it, but I knew every single word.