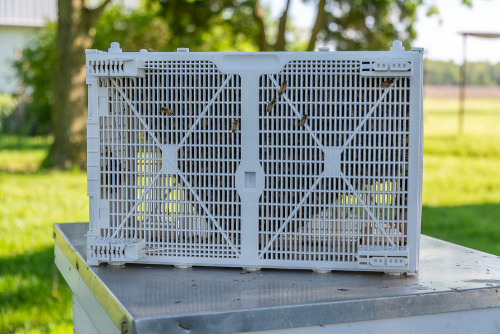 Got us some new girls to work around the compound this summer.

This is a "package" of honeybees, about 7000 busy girls, give or take a few dozen.  You can see a few rebels on the outside, and that dark mass on the inside is a moving mass of live honeybees eager to set up housekeeping and get to work. 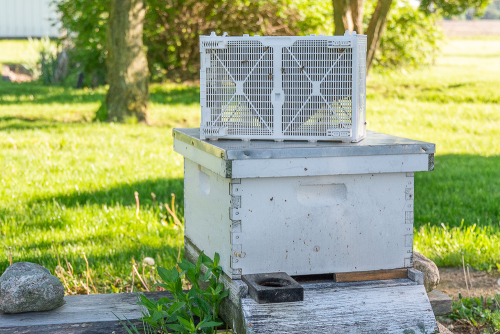 We got 2 packages with 2 pounds of bees each, and I moved them into their new homes over the weekend.  Each new colony has its own hive home, like this one. 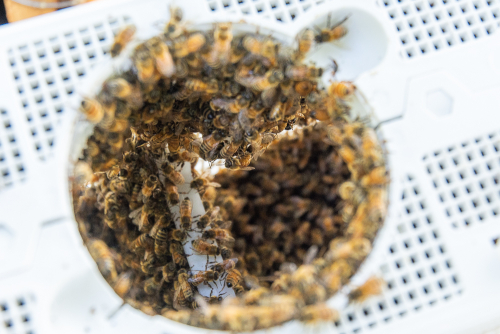 A look inside the package, before I emptied the honeybees into their new digs... 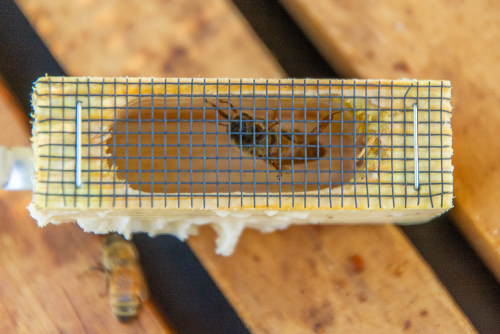 Of the 7000+ bees inside, nearly all are females but only ONE is the QUEEN!  Each honeybee colony has only one queen, and she is one special gal.  She comes in her own cage and the bees will gradually release her by eating through the marshmallow "cork" in the end of the cage.  This is a young newly-mated queen, ready to start laying eggs.  She looks like her sisters, but her abdomen is longer.  As she ages (a good queen can live for 5 years or so!) she will grow longer and become even more easily distinguishable.

Do not underestimate the value of a queen honeybee.  A new queen costs $40 and upwards to purchase.  But she's worth her weight in golden honey!!!

I bet you didn't know that honeybees had all different sorts of pedigrees, did you?  There are several genetic strains of bees to choose from...in recent years we've had Italian queens and Carniolan queens, each type bred to enhance favorable characteristics and traits.  This year we are trying a new (to us) queen breed, called Saskatraz queens.  We are hoping they are gentle, prolific egg producers, and hardy to survive our harsh winters.  Time will tell... 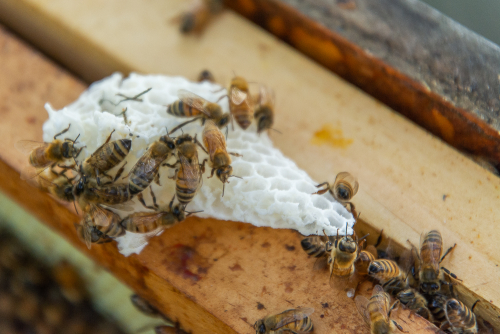 The girls had already begun building comb inside the package.  Amazing architects they are, creating perfect hexagonal cells that they will use to rear baby bees (brood) and store pollen and honey. 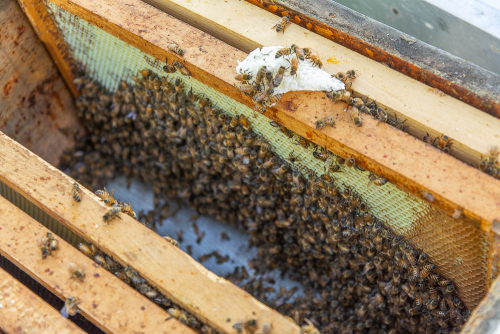 Soon after I dumped the bees into the hive, they began to crawl onto the frames of foundation that will be the base of the waxen cell walls of their colony.

It won't take long before they have built honeycomb and the queen can begin her lifelong job of laying eggs, day in and day out.  She will hopefully never leave the hive, but for the rest of her lifetime produce eggs that will hatch into larvae that will grow and transform into many generations of new honeybees.

As the days lengthen and warm, they'll be buzzing all over the place from sunrise to sunset, collecting nectar and pollinating plants along the way.