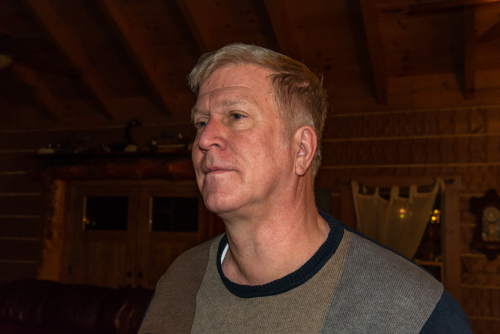 Me and my man were up WAY before the sun yesterday to head to St. Vincent's Hospital in Indianapolis for his total thyroidectomy.

Kim and I both noticed last summer a bump on his neck.  We at first assumed it to be a swollen gland, and even his primary care doctor didn't seem too concerned.  But it kept slowly growing and by last September we knew he needed to seek more medical attention to figure out what was going on.  He first saw an ENT who did scopes and scans and diagnosed Kim with a goiter.

I thought only OLD people got goiters.  Goiters were a malady for old grandpas and grandmas.

Reality check.  I guess, at 63, he is beginning to fit into that category.  Glad I'm SO MUCH YOUNGER than him!

Next step was a visit to an ENT surgical office for a needle biopsy where a large amount of fluid was drained off.  Because of the excessive fluid, the lab tests for cancer were inconclusive.  Back to the ENT where she gave a couple of options...wait and see (with a very high probability that it would fill up again and again and need draining repeatedly) or pursue having it surgically removed.  Add into the equation that thyroid issues and even thyroid cancer runs in his family (his dad Kenny had thyroid cancer about 15 years ago), after consultation with a head-and-neck surgeon who also specialized in plastic surgery, it was determined that the best course of action would be to completely remove Kim's thyroid.

Quick anatomy lesson...I did not know that there are two parts to the thyroid, one on each side of the neck.  Both halves of Kim were abnormal...one side with the large goiter and the other side with several small nodules that aren't supposed to be there. 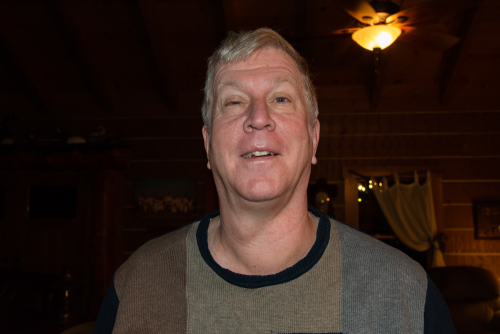 Ignore Kim's sleepy eyes (I think he was really winking at me!)...over the years he's become resigned to my photographic documentation of every life event and has become a pretty good sport about it.  So at 4:30 am he let me take a "Before" photo of his deformed neck.

It's hard to see well from the photo, but the very large goiter is that huge lump under his skin at the left base of his neck (right in the photo).  I've joked with him that I enjoyed the extra-cushiony "goiter pillow" for my head when we snuggled at night.  I guess it's back to the bony headrest again....

The most dramatic thing is that you can see how his Adam's apple had been shoved way off-center!  That large goiter (which refilled with fluid rapidly again just a few weeks after being drained) had displaced his trachea by almost 2 inches, which was causing him to have trouble swallowing and sinus drainage issues. 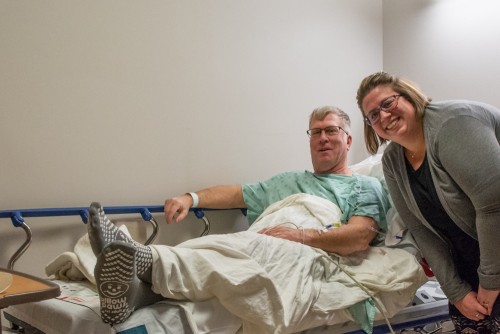 So to the hospital he went, where he was admitted for a 7 am. surgery that would last 2 hours.

Our daughter Emily was so sweet to take a day of vacation from her school-teaching job to spend with us at the hospital. 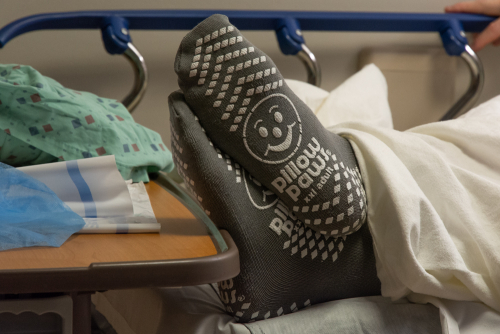 I was a little jealous of the cute socks he had! 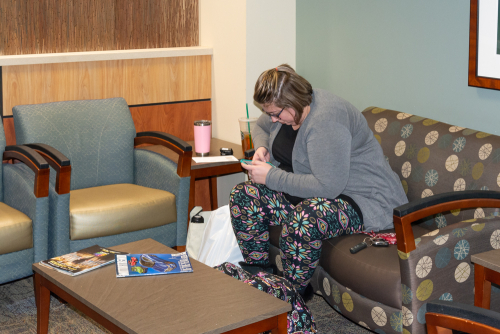 Emily and I camped out together and enjoyed a great time chatting it up while Kim was getting his throat slit.

Hate the circumstances of it, but I loved spending time with my wonderful daughter! 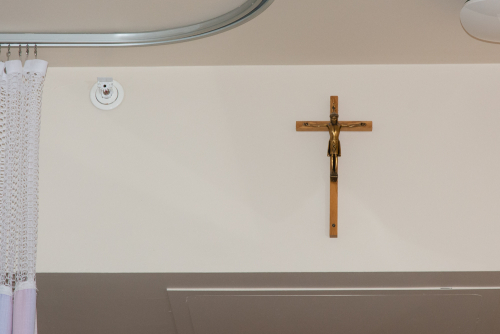 We were confident that Our Great Physician had the situation completely under His control.  Love the wonderful reminders everywhere in this Catholic hospital....

Dr. Biggerstaff (his name always makes me snicker...I can't help but wonder the origin of that surname) told us the surgery went great.  The goiter was HUGE and even tucked under his breastbone.  We won't have pathology reports until next week.  If there is any sign of cancer, Kim will have some further treatment but even if that happens he should be fine in a few weeks. 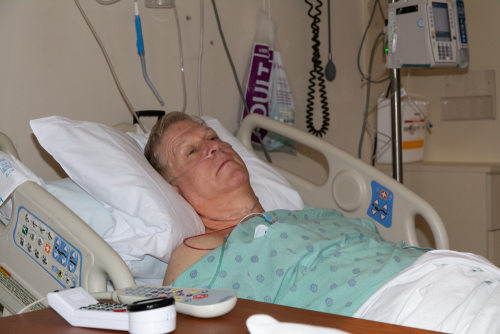 Around 11:30, Emily and I were allowed to go be with him in his room to hang out while he came back to his senses.  Whatever that is... 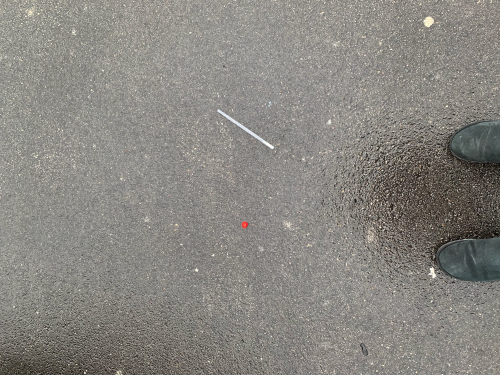 After we knew Kim was doing well, Em and I went to Bravo's for lunch and then swang by Steak 'n Shake for a milkshake to take back to Kim.

And one for me too.  Because I never turn down the opportunity for a milkshake.

Unfortunately, in an incident that I can't quite explain, as I was carrying both milkshakes walking as quickly as I could to get out of the cold rain that was blowing on me, somehow or other BOTH (not one but BOTH!) milkshakes slipped out of my hands to a crash landing on the parking lot!  I was stunned into inaction for a moment, but we did manage to salvage most of the chocolate shake through our uncontrollable giggling.  Silly things always seem to happen when Emily and I get together!

Anyway, Kim and I shared part of the chocolate shake that was left.  (Kim said the flavor tasted more like "rocky road"...the man is clever, even after surgery...)  When Emily left about 3 hours later, she snapped this photo of the milkshake disaster scene...the rain had washed away almost everything, leaving only a lone straw and cherry behind. 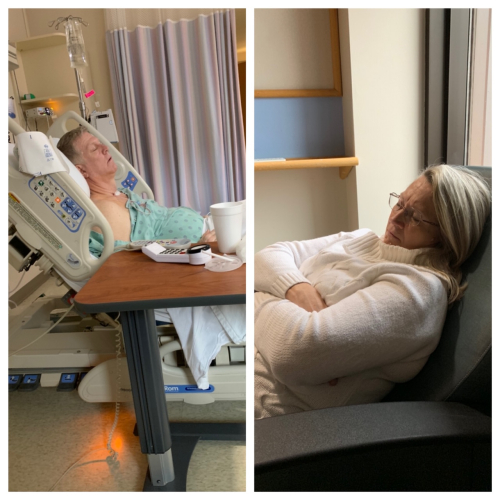 Thyroid surgery is exhausting...and I do enjoy my afternoon nap.  Emily snapped this shot... 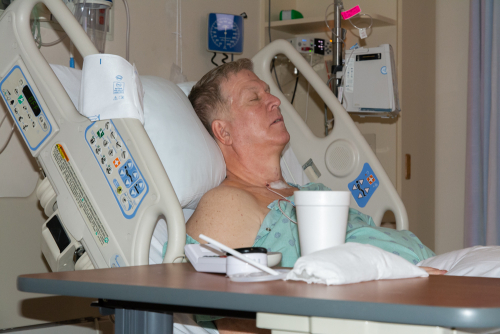 Kim did great!  He only has a 2.5" incision that I think will leave a very minimal scar (perks of having a plastic surgeon do the operation) and has had very little pain, not enough to take any kind of pain relievers.  His throat is a bit scratchy from the tubes they used during surgery and he can't twist his neck around, but there is very little swelling and his neck looks so much thinner already.

My goiter pillow is permanently gone.  But I'll manage....

After a nice visit and hospital room dinner with our son Kristoffer, Kim was discharged about 7:30 pm. and I braved the treacherous road conditions to drive us safely home.  Never were we so glad to see our comfy recliners!

A not-so-fun, but necessary and successful day.