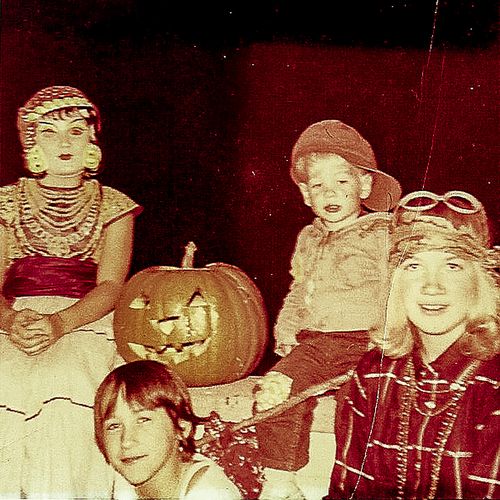 It's been a week of nostalgia and reminiscing, so for Halloween I just had to throw this photo out there again.

The only store-bought costumes we ever had were the plastic masks with elastic around the back (like the gypsy one Barb is wearing), selected with great excitement and care from the very limited inventory (as in 4 or 5 to choose from...) in the basement of the "dime store" in Hagerstown.  With the proprietor Mr. Renaker himself, wearing his starched white shirt and bow tie, cowering over us like he did all of his customers, his hawkish eyes following every move to be sure we didn't damage or steal something.  Believe me, neither crossed our minds...Mr. Renaker was the least of our worries, we had Bud House to deal with us at home!

A few more houses have sprung up since then, but back when I was a child ours was one of only 5 homes along our stretch of the County Line, and only 1 of those had trick-or-treat potential.  Two others had children of their own and one was totally forbidden to us as it was the run-down home of an old man we called Filthy McNasty.  We'd have been terrified to go there anyway, let alone ask that crazy old codger for some candy!  So we visited the older couple next door, and Mama would drive us to Grandma's house, who always seemed totally unaware that it was Halloween.  She'd give us a bruised, scabby, wormy apple that had fallen from her tree and maybe a cookie from her cookie jar.

There was the occasional Halloween party in the barn of a school friend.  When I was in 6th grade, I went to my classmate Rebecca's and we roasted weiners, ate spooky treats, and played the oh-so-teenage game of "Spin the Bottle" and wouldn't you know it I had to kiss the yuckiest boy there!  My first "kiss"...and that one set me back for a few years!  Ugh!

Trick-or-Treat for UNICEF was a big deal each year.  Mama would drop us off in our homemade costumes at Hagerstown Elementary, where we'd go with supervised groups walking through Hagerstown soliciting donations for UNICEF relief work in far-away third world countries.  Often we'd get some cherished treats ourselves as well.  One year I was fortunate enough to be in the group that rang the doorbell of the RICH family of Hagerstown, the Teetors, and we were over-the-moon to be escorted inside their mansion and see how the other half lived.  I remember being in awe of the thick dark woodwork and the gorgeous upholstered furniture that looked like no one's bottom had ever graced in a room that no one used.  Mrs. Teetor gave us a whopping $20 bill and cookies all around!

So today is Halloween, according to marketing experts the #2 most-decorated and celebrated (and dollars spent on!) holiday of the year.  Adults (including myself!) have bought oodles of candy and even costumes (guilty as charged); many parents have spent their weekly food budget buying elaborate get-ups that their children will wear for a couple of hours tonight and later take to Goodwill, then until Christmas and beyond ration out an unbelievably huge stash of sweet treats.  It's the American way.

haha!!
Love it Terry! You and Barb were the coolest, what was I???
Maybe Mark and I were hobos?
love yas, m

This is awesome. Thanks for sharing.