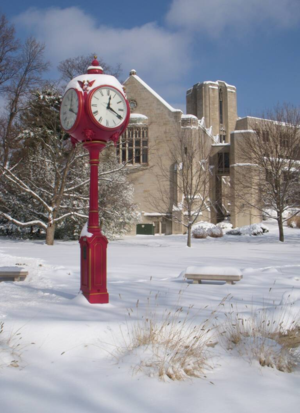 Remembering the 40th anniversary of the biggest snowstorm of my lifetime...the Blizzard of '78.

(I originally wrote this post in January 2009, following a big snowstorm that closed down the Indiana University campus while my two youngest sons Kamaron and Kyler were students there.  While that was a big storm, it didn't hold a candle to THE WINTER STORM of my generation that had happened 31 years before....)
I was a junior at Indiana University, living at Wright Quad, majoring in elementary education and working part-time at the Wright Quad cafeteria. Back in those days, weather predicting was not nearly as sophisticated as it is now.  We didn't have access to satellites, radar, and all the technological stuff we are used to today.  But the weathermen had been predicting a big snowstorm/blizzard approaching for several days.  We were getting a little tired of hearing about it, because most of the time those big storms fizzled out and never really amounted to much.  So, even though they said it was coming, we didn't really pay much attention. 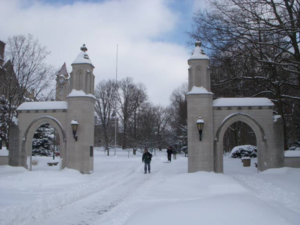 photo credit Kyler Gray, Jan. 200
We should have.  I should have.
Every evening after classes, I walked across Jordan Avenue, crossed the parking lot behind the library, and worked out at the Wildermuth Intramural Center.  It was a big indoor track with basketball courts in the middle, and I would meet my friends there and we would run 3-5 miles around the track together.  The night the big storm was predicted, for some reason I went alone.  The sky looked ominously gray, but I don't remember thinking much about it as I walked into Wildermuth.  I ran for an hour or so, then put on my coat to leave.
What a difference that hour made!  When I walked out of the warm, lighted building, a furious wind was swirling snow everywhere.  It was nearly dark and even with the lights in the parking lot, I couldn't see but a few feet in front of me. The wind practically knocked the breath out of me and there seemed to be no one else around.  I slowly made my way across the parking lot, holding onto the nearly-invisible cars that were parked there to keep myself heading in the right direction, toward Jordan Avenue and my dorm.  It was scary, a total white-out, and it felt like I was the only person on the entire campus.  When I reached Jordan, there was no way to tell if any cars were coming, but since I didn't see any headlights I hurried across as best I could.  I could vaguely see the outline of Wright Quad, and was able to make it safely to my room.  I never saw a soul the entire time I was out there, and the three minutes it usually took me to walk the short distance surely took closer to ten minutes and seemed like forever!  I realized later that there were probably many others out that night like me, but I could barely see in front of me and with the wind howling like it was, there was no way I could have even heard someone shout, let alone see them.
My roommate Susie was there in our dorm, safe and sound, as were all of my friends.  Little did we know, the storm was just getting started.
That was Wednesday night, January 25, 1978.  The blizzard continued for 58 hours, finally ceasing its violent fury on Friday, January 27.  It was a record-breaking storm, dumping 16-20 inches of new snow on an already 5-inch snowpack, with the wicked wind creating drifts 10-20 feet high!  The barometric pressure (if you're into such things!) of 28.28 was the lowest ever measured in the United States for a non-hurricane system.  Amazing, really!
Indiana University, for the first time ever, closed completely down for two days.  Completely.  Utterly. CLOSED!!! Thirty thousand students, cut off from the rest of the world, isolated from civilization, alone in our own little universe. No cars on the drifted streets, walking was the only transportation and there was nowhere to walk.  Every building on campus was completely shut down...except the dorms.
With the storm hitting in the evening, almost all the staff members had gone home for the day.  Wright Quad, as all the other dorms on campus, was essentially on its own for the next few days.  Not such a big deal, you might think...unless you worked in the cafeteria, like I did.
None of the adult full-time workers could make it in to campus, so the feeding of 900+ hungry (and bored!) students fell to the few student supervisors and the regular student workers, like Susie and me.  Wright Quad cafeteria fed 3 meals every day to all the students who lived there.  Each meal there was a main menu meal, with a few a la carte items alongside.  Almost everyone ate the regular meal that was served.  The menus were put together by the adult supervisors and posted at the beginning of each week.  Of course, as you would expect, there were some menu items that were student favorites...and others that no one really cared for.  The simple foods like hamburgers and french fries were ones everyone loved, and we all especially looked forward to make-your-own sundaes.  I guess kids haven't changed all that much, have they?
Basically left on their own to manage and oversee the feeding of these 900 students, apparently the student supervisors got together and totally reworked the menu that had been published.  They changed to items that were easy to make and/or student favorites.  Anything that was in the freezer was fair game.  I showed up for work the next morning to make cinnamon rolls, and since they were too much trouble to make, we served toast instead.  Pizza, hamburgers, french fries, lasagna, spaghetti, and chicken fingers replaced the more complicated menu items that had originally been planned.  Balanced diet?  Forget it!  We made what was convenient, quick, easy, and available.  And, for the most part, the students didn't mind at all.
But, boy, did we all get in trouble when the adult workers came back!  The head honcho woman, who was not a nice lady anyway (think Nurse Ratchet from "One Flew Over the Cuckoo's Nest!) was absolutely livid about the whole matter.  She had a big pow-wow where she scolded us for our terrible deeds.  I felt sorry for the student supervisors, who took the brunt of the punishment.  She should have been THANKING them (and us!) for keeping 900 students from starving!
The Blizzard of '78.  It's one of those moments in time where everyone who was old enough to remember knows exactly where they were and what happened to them.  My parents and siblings had their own problems to deal with at home, being snowbound for days out on the County Line.  But for me, the Blizzard of '78 is yet another cherished memory from my college days at Indiana University.

Posted at 08:45 AM in Indiana University, Ramblings | Permalink | Comments (2)

OMG - do I remember...I went to a country school and we missed 17 days of school. The piles of snow were so high weeks after they were cleared, the school buses couldn't make a turn on the country roads. And no...NEVER made a day up :).

We put on our snow skies and walked on top of the snow to the grocery store with backpacks on. The only transportation you saw anywhere for days was snowmobiles. The snowplows were getting stuck, and then they had to bring in pay loaders to try and clear the 22 foot drifts. People were opening 2nd story windows and walking out. Crazy, crazy storm...but lots of fun for awhile.

Thanks for the memories....

Your memories are amazing!! We had so much fun those days at IU. That night and the following weekend were spectacular on campus. I remember the frustration of learning my boyfriend Steve couldn’t travel from Elkhart to visit. An early lesson in the power of nature.

The snow melt took forever that spring. And thanks for teaching me how to run around that indoor track and the little 500 track nearby.