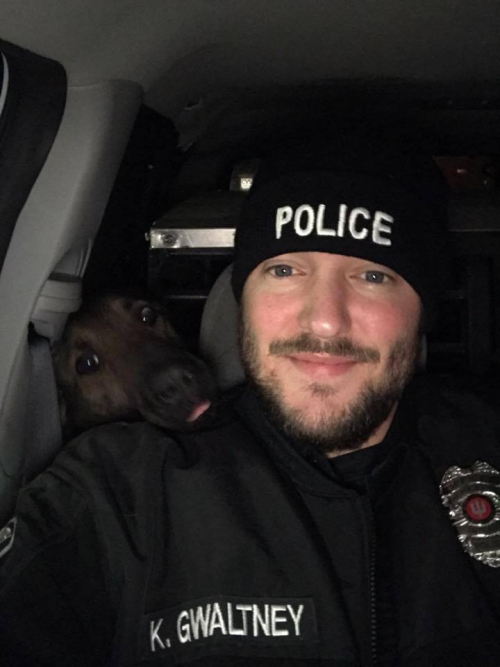 The world lost a good young man this past Tuesday afternoon.

Kurtis Gwaltney, son of my dear sweet cousin Sabine, was tragically killed in a motorcycle accident at the much-too-young age of 26.

I didn't know Kurtis well. I'd see him briefly at family gatherings, but rarely talked to him. Mostly I kept up with Kurtis's life through my visits with Sabine.

After graduating from high school, Kurtis enlisted in the US Marine Corps, instantly gaining newfound respect and admiration in my eyes, Dad and my brother Mark both serving in the Marines. I don't know a lot about Kurtis's service, but I do know he lived through many things that a 20-year-old should never have to experience. While on his tour of duty in Afghanistan, Kurtis witnessed the killing of his comrade and suffered serious injuries himself when an IED exploded near his company, leaving permanent and painful physical and emotional scars. It's safe to say that Kurtis left for the Marines as a boy but returned home a man.

A Jarhead. A Leatherneck. Once a Marine, always a Marine.

And I've never been so grateful for that Marine Corps brotherhood than I was February 17, 2015. The most dreadful day of my life.

After months of steady decline suffering in the latter stages of Alzheimers,  my late Daddy had finally reached the point where Mama could no longer keep him at home. February 17, 2015 was the day that Mama and I loaded Dad in my vehicle for the very last time, knowing he would never come home again, and took him, as we had been directed, to Ball Memorial Hospital for evaluation in the psych ward there.

Dad was confused, combative, and agitated. He tried to get up and leave many times, only restrained when we reminded him he was wearing a hospital gown and not adequately covered. That seemed to bother him enough to sit him back down...for a few minutes before he'd get up again. The ER was busy that night and it felt like forever Dad was trapped in that room and us trying to calm him.

Mama and I were nearly at our wits' end when a huge, totally unexpected blessing appeared in the person of Kurtis. A police officer, Kurtis was working as a security officer for the hospital. Somehow he'd heard that Dad was in ER (I'm assuming his grandpa/my Uncle Jerry told him...) and came by to see us. What a welcome distraction for Dad and relief for Mama and me, as Kurtis engaged Dad in conversation and stayed with us for awhile until the doctors finally got around to seeing him (I wonder perhaps if Kurtis's presence mercifully hurried them along too...).

That whole evening Kurtis was in and out, continually checking on Dad and us. I doubt if Dad understood exactly who Kurtis was (since by that point he had trouble realizing anyone's identity....), but the Marine connection seems to transcend all other connections. Dad knew without a doubt that Kurtis was a fellow Marine, and I've never been so grateful for that brotherhood...it sustained us and rescued us several times that night.

When it was time to move Dad up to the psych ward and get him situated there, Kurtis escorted us all the way and stayed there talking with Dad while Mama and I filled out all the mountains of paperwork and consulted with the nurses. Kurtis was tough and gentle and strong and kind all rolled up into one sweet soul (those same attributes possessed by Dad), and we will be forever indebted to him for his kindness toward Dad and us.

After 8 hours in the hospital, it was time for us to tearfully leave Dad around midnight. Kurtis was there, escorting us downstairs. About 5 inches of fresh fluffy snow covered everything, and it was still snowing hard. Kurtis pulled his police vehicle up to the door for Mama and me, drove us into the snow-covered parking lot to our vehicle, started the engine for us and brushed the snow off the windows, helped us into the vehicle, and made sure we were safely on our way before he drove off himself.

Thinking back now, it was a surreal moment in an unbelievable night...it almost seems like a bad dream. And Kurtis appeared out of nowhere, truly an angel of the Lord in disguise. He could have easily gone his own way and ignored the fact that we were there since he barely knew us, but that's not what he did.

One Marine cared for another Marine.

And I have to smile thinking that perhaps Dad was there in Heaven to greet Kurtis when he arrived. What a glorious, comforting picture in my mind!

One Marine caring for another Marine.

Thank You Terry for reliving that emotionally exhausting experience with the Sprinkle of Kurtis that made it livable. I was far, far away here in Florida, but when you related the story that day/night I was touched that Kurtis, whom I also knew only through proudly shown photos, was such a knight in shining armour to my family in need. He certainly demonstrated the essence of family, doing the right thing even if it is not convenient, and going above and beyond his job as security officer. He was raised well! A testament to him, but also to his parents, grandparents, and maybe a little bit of Marines too.
Maria~ Sabine's cousin/ Terry's sister (one of her favorites)

Hi Rick,
Thanks for your kind words. I can't imagine the pain your daughter (and therefore YOU!) is going through! We have a surprise connection. Ann Teeters is also my cousin and says she knows you through her military service. What a small world! Please give my sincerest condolences to Tierany. I know Kurtis would wish only the best for her as she moves on after this tragedy in her young life. I know there will be lots of people there tomorrow, but I am hopeful I will get to meet you.

This is absolutely beautiful Terry. I am wiping my tears and saying a prayer for your family. . .and yet thinking of my days ahead of me. Love you dear friend!! :)

As I read this blog my thoughts go back to how many times Kurt was there for my father who also suffers from Alzheimer's. Kurtis will always have a special place in my heart as a former Marine/police officer. My name is Rick Holland and my daughter called Kurt the love of her life. Kurt on many occasions would visit my father and even take him along with my daughter Tierany to Applebee's for dinner just to get him away from the home. His stories of my father would place us in stitches. His ability to tell stories of everyday happenings is just the iceberg of this special man. Thank you so much for this blog, for the smile and of course the small tear as I read.

Thank you for writing this. Like you I didn't know Kurtis well. My husband is Brian's cousin, and we would occasionally see Kurtis at gatherings, but that was mostly before he left for the Marines. The Gwaltneys have a strong military connection and history. My brother in law is actually writing a book about all the Gwaltneys experiences in the military, and has been interviewing all the family veterans, I am not sure if he had a chance to interview Kurtis, but I'm sure he'll include his story even if not. My heart aches for Sabine, Brian and the whole family. Again thank you for sharing this story!