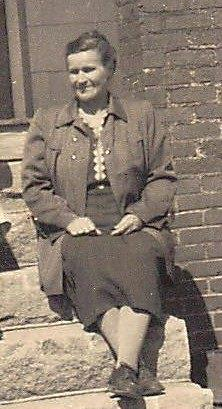 Mary was quite a character.

She had to be to survive.

I was in college when she died, so I've got some wonderful memories of visiting her at her last home in Kannapolis, North Carolina. It was "an old lady's home", if you know what I mean...the decor, undoubtedly, had not been touched since the day she moved in. I can remember sitting in the dark, musty living room on an ancient couch that might have been stuffed with horsehair, for all I know. OLD. And scratchy.

Grandma Britt sat in her own chair in one corner of the room.  I don't remember what her chair looked like because my fascination was on what was BESIDE her chair...Grandma's version of a spittoon, a rusty old can that she would regularly spit in during our visits.  Grandma chewed snuff. Yes she did. SNUFF.

Her hair was always bound up in a bun at the back of her head.  But Mama recalls seeing Grandma with her hair down, brushing her very long, probably-never-cut mane before winding, twisting, and pinning it back up again.

She always wore a dress. Always. And hose. Knee-highs. Or maybe thigh highs rolled down.

But from what Mama and her sisters remember, she didn't always wear underwear. So much handier when working out in her garden just to hike up her long layers of skirts and squat right where she was to do her business. Who had time to mess with running to the outhouse every time?

Grandma was a character, for sure.

She had dreams and visions of Jesus and preached the damnation of Hell to everyone who would and wouldn't listen. And she saw ghosts, "haints" as she called them. Once Dad was driving her somewhere and they came across a "Road Closed" sign and barricade.  Dad, as he often did, ignored the warning and drove around the barricade.  Grandma was astounded when the road was indeed NOT closed at all when they arrived at the apparent road construction site, and was totally convinced that Dad had super-natural powers and prophetic vision to know ahead of time. (Which he, of course, did NOT know...he was just being the rebel that he often was, defying a warning. I've seen him do that very same thing many times and end up turning around because the road WAS indeed CLOSED.) He got lucky that time, but Grandma Britt held him in even higher esteem after that incident.

One vivid memory I have of Grandma was a summertime visit to her. She was sitting on a homemade bench under her gnarly apple tree when we arrived, peeling a pan-full of apples with the rustiest, worn knife I'd ever seen. The blade had been sharpened so many times it wasn't much more than a curved sliver of metal. She peeled an apple and sliced it into pieces, handing each of us a slice. Then she stuck the blade of that knife right into the tree, where she apparently kept it so it was handy when she wanted to peel an apple. Mama says Grandma would lay those slices of apple across the rusty tin roof of her shed to dry them in the sun, then collect them a few days later (minus, I'm sure, a few slices that the birds and squirrels snitched) to use in the winter to make apple pies.

Details about Grandma's early life are sketchy, but here's what I do know.

In 1907, when Grandma was 14 years old, she was working in a textile mill in Albemarle, North Carolina to help support her family, none too thrilled about handing the entirety of her meager paycheck over to her daddy every pay day. There she met Allen Britt, a 40-year-old widower struggling to raise a family of teenagers on his own following his wife's recent death. Perhaps Mary was enthralled by his skillful fiddle-playing during breaks at the mill or maybe she was just tired of working hard with nothing to show for it and was antsy to leave home. But somehow or other she agreed to secretly run off several counties away to lie about her age in order to marry Allen, making her daddy very angry both for losing his daughter at such a young age and losing her income.

If Mary thought she worked hard in the mill, she had no IDEA what working hard really was...but she quickly learned. She moved into Allen's tiny cabin to cook and care for his teenage clan, becoming the step-mother to young adults older than she that apparently were not too thrilled about having a new "mother" telling them what to do. Life was hard but she was strong and able and really had no choice but to make her marriage work.

Apparently Mary really did love and hanker for her man, but privacy was pretty much non-existent in their tiny cabin. As the family story goes, when the children were all outside and "the coast was clear," Mary would ring the dinner bell to signal Allen in from the barn or the fields. He'd drop everything and quickly get to the cabin for a brief hot rendezvous with his young, eager, and willing panty-less wife.

Grandma was a character. 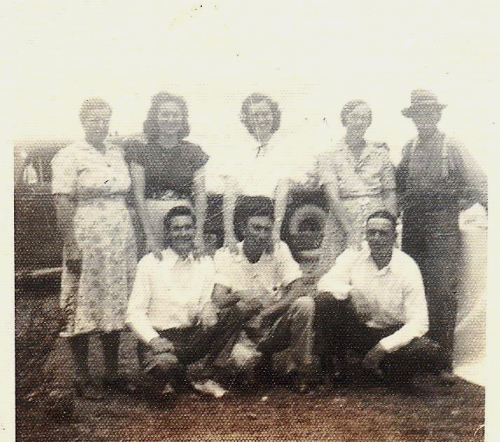 Not only did Mary raise Allen's nearly-grown children, they had several of their own, including my grandfather Andy Britt (kneeling in lower right) who was born in 1912. Mary and Allen are on either end of the back row in this 1945 photo. 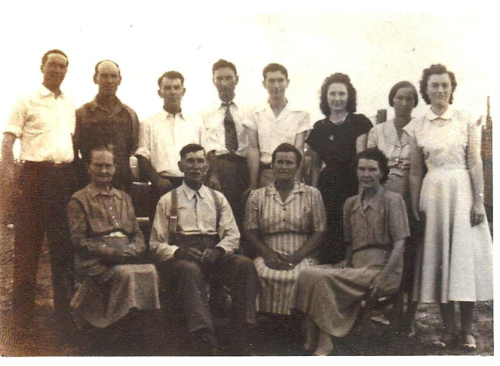 "His and Ours" family shot...my Grandpa Andy is in the top left of this photo. Oh how I'd love to have an afternoon alone with this lady, to see her smile again and even spit into her old smelly can, to be amazed at her stories that I wasn't old or wise enough to appreciate as a child.

Quite the character she was, a strong godly woman.

I love the stories you write and tell about ...so talented and knowlegable !!