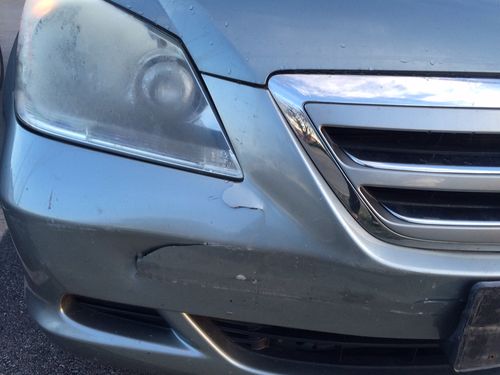 Ever have a day that you want to just start over, a do-over day?

Yesterday was one of those days for me.

Kamaron was having trouble opening and shutting the side door of his van, so we gave him our vehicle to drive to work and I was on my way to our friend Jeff's car shop to see if he could fix Kamaron's car doo. As I was trying to change into the left turn lane, the line of cars in front of me stopped and I rear-ended the car in front of me which dominoed into the car in front of her. I was going very slow, no one was hurt, it was really just an aggravating fender-bender involving three cars. It was totally my fault.

Can we just start this day over?!  Not only was it just plain STUPID of me, it wasn't even my car that I crunched!

There was a bit of good news...Jeff did get the door fixed...a broken crayon was lodged in there causing the issue. One thing fixed, another broken....

Kim just laughed when I told him. I guess it made him feel good that he wasn't the only one who occasionally crunches vehicles...

As if that wasn't enough to ruin the day, I had to make a phone call to reschedule our Kenya trip. Way back in April I got a "good deal" on airline tickets to Kenya (as it turned out, they would have been even cheaper had I waited) so I jumped on the chance and bought two tickets to the tune of $2130.64 with a departure date of December 3, 2015...just a few days away. I had booked them through CheapOair.com. When I was diagnosed with cancer back in May, the doctors forbid strongly urged us not to go to Kenya with my compromised immune system, so early on we knew we couldn't go. I had called CheapOair customer service and talked to them about rescheduling the flight...no problem (of course, there is a fee involved), just to call back later when we knew the time we wanted to go. Since it'll be at least May before I'm ready to make a big trip like that, we decided fall would be our best option. They don't allow booking more than 11 months in advance so I waited until nearly the last possible day to book our trip for late fall.

"So sorry," said Rysan, the foreign representative that I was talking to and trying to understand.  "You must complete your travel before April 15, 2016."

NO ONE TOLD ME THAT!!! I had actually called Customer Service twice and had told them we were planning to reschedule our trip for next fall, and the April deadline was never once mentioned. I'm sure it's somewhere in the 10 pages of fine print that no one reads...

I did know they were non-refundable tickets and I did not buy the travel insurance. (Lesson learned!) And apparently British Airways (so Rysan said) does not offer travel vouchers.

Bottom line...although Rysan said he talked to his superior and tried to come up with a solution (I don't believe that he really did...), we will be losing our tickets.

Kim (bless his heart!) was not upset at all. He said it's just money, it's already been spent and we haven't missed it at all. Just one of those things that is out of our control.

I will never do business with CheapOair again, that's for certain. And I told Rysan that. Then he had the nerve to send me an email telling me what a pleasure it was to serve me and he'll be glad to help me with my next trip.  Uh...NEVER!!! It's not called CheapOair for nothing.

I cried more tears yesterday than I have for months and months. It was not a good day. At. All.

More like a terrible, horrible, no good, very bad day!

So, can you book the "new flight" for April and then re-book that flight at a later date?