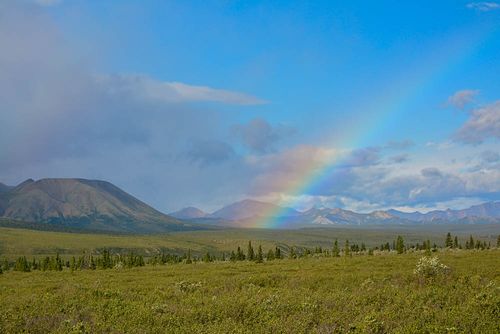 We knew it was gotta be a great day when a rainbow greeted us just as our bus drove into Denali National Park. 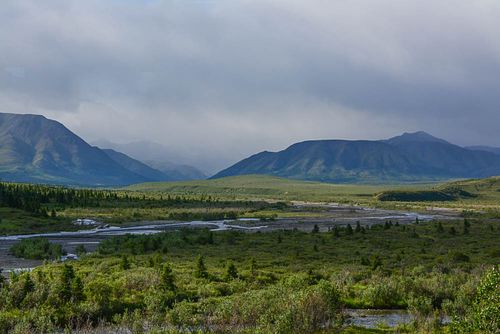 Our whole Alaska trip, Kim and I had been looking forward to our day in Denali. It's been on my bucket list for awhile... 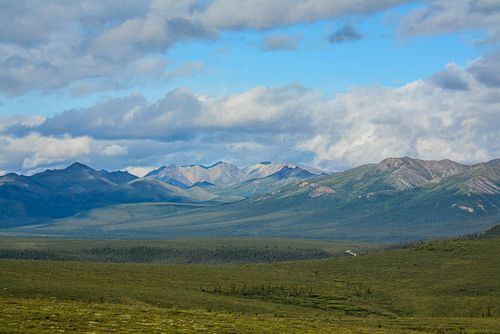 ...I kinda likened it to the Serengeti of Alaska...with mountains. 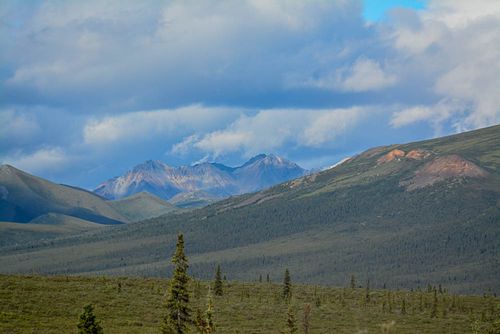 And the scenery was magnificent, to be sure.

The amazing and awesome thing is, Denali National Park is six million acres of pristine, unspoiled wilderness with only one road running through it. 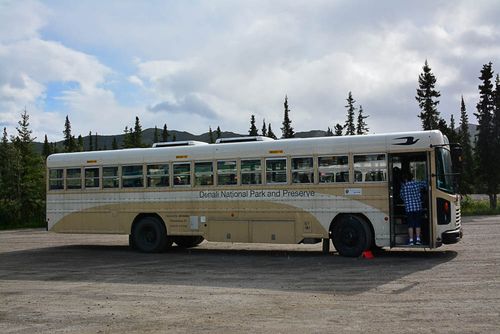 And the bad thing is...Denali National Park is six million acres of pristine, unspoiled wilderness with only one road running through it...and the only vehicles allowed on that road are these modified school buses.

There were three tour options and we chose the middle one...8 hours on the bus, traveling about 60 miles of the 92-mile highway. 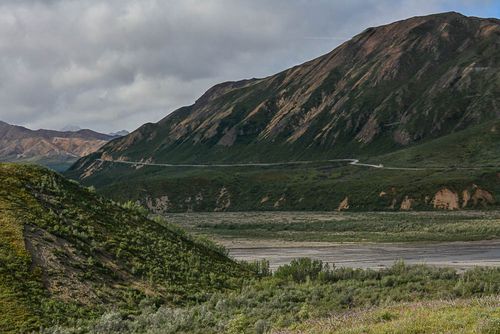 So we spent the day driving slowly 60 miles down this road (as you can see, it was a little dicey at times, especially on a glorified school bus...) and then turning around and driving back the same stretch of road to the park entrance. 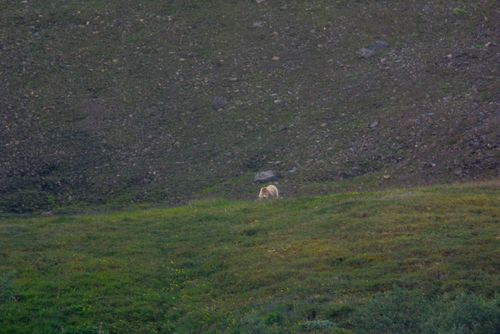 Of course, we were hoping to see lots of wildlife...and everyone was pretty excited to spot our first grizzly bear, although he wasn't very close and being inside the bus with 60 other people vying for spots at the half-way open school bus windows isn't exactly the ideal photography scenario.

But I did the best that I could with my ultra-zoom lens. 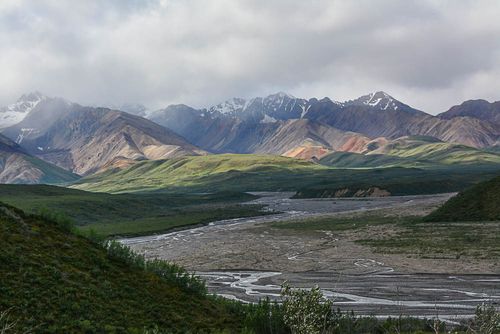 Grizzlies are loners, and most of the ones at Denali are blonde grizzlies.  As we cruised along this braided river, someone with VERY GOOD EYES spotted another grizzly on the gravel below... 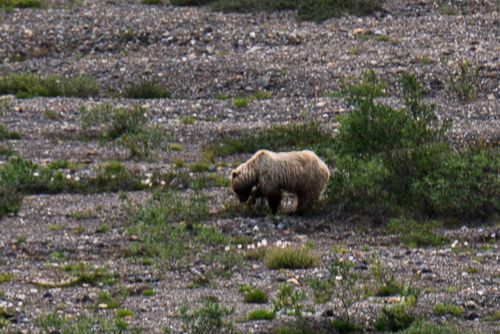 Just meandering around, looking for berries to eat... 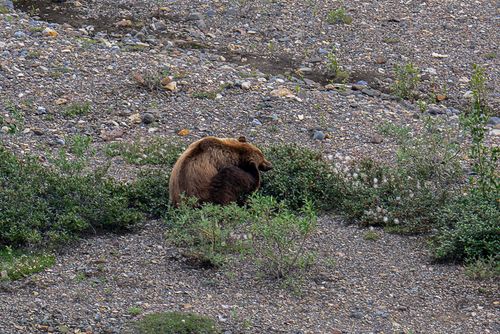 Then, just a few minutes later, our best bear-spotting of the day.  He was relatively close (as in 1/4 mile away instead of a mile or more!)... 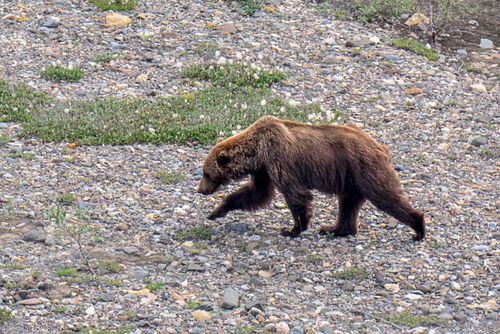 ...this one a big brown grizzly on the move! 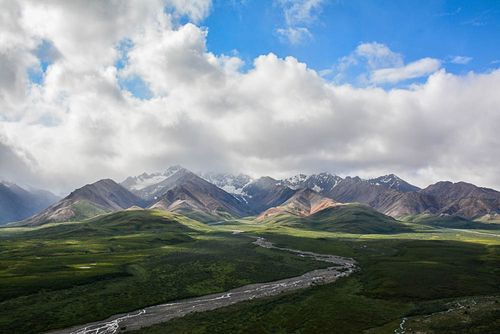 I'm sure there were many more down there, but it's just SO VAST that your eyes can hardly take it all in! 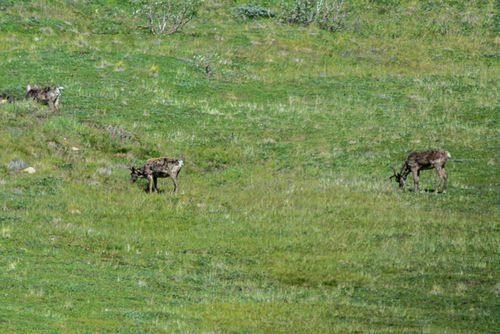 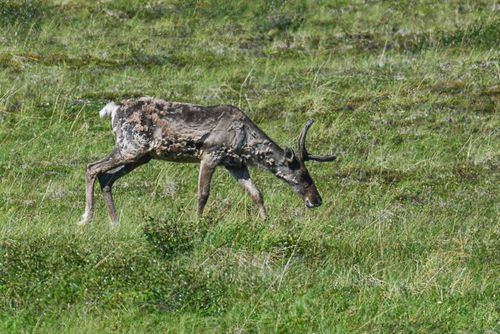 We saw several caribou, most were pretty far away... 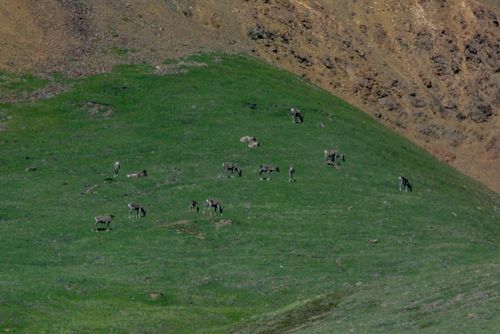 ...scattered along the hillsides. 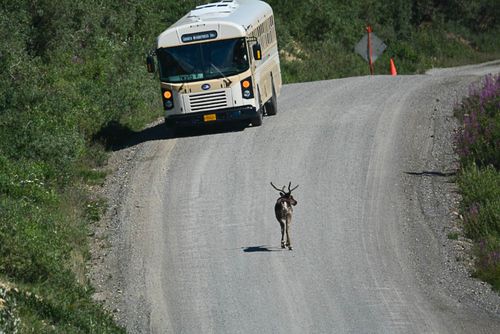 One did stop bus traffic for a few minutes... 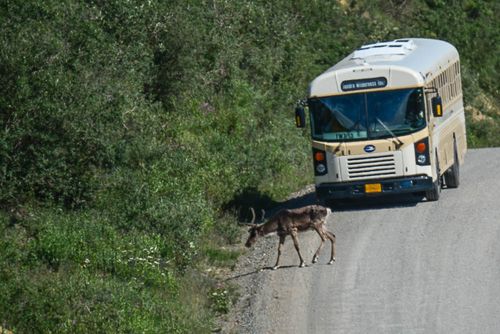 ...until it decided to scamper off into the brush and up the hill. 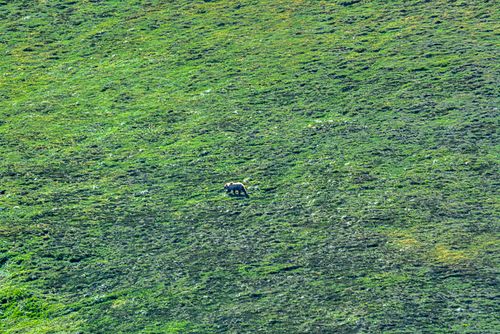 Another grizzly...can you spot him? He was a long ways off, just a slow-moving white blob on a hillside.

We ended up seeing 5 different grizzlies, and our guide told us she had not spotted 5 grizzlies in one day the entire season.  So I guess we were lucky, although I have to admit I was disappointed we didn't see more and not a single moose the entire day. But the landscapes were jaw-dropping and it was a perfectly gorgeous day, the lighting was beautiful on the mountains.

We did not see Denali/Mt. McKinley...too cloudy and foggy.  I think it's in the background of this photo somewhere.... And I really enjoyed our tour guide.  She was a 50-ish woman, very fit and outdoorsy, and she trains sled dogs.  She lives on Kodiak island during the off-season (now that's on my ever-growing bucket list...) in the middle of a grizzly bear preserve.  She told us some entertaining tales of her encounters with bears.

She also told us that she and her sled dog team spent 3 nights in the middle of winter on the front porch of this Ranger Station in Denali Park a few years ago, stranded in a blizzard.  In the winter, the park is closed to vehicle traffic (obviously...too much snow!) but is a great place to take your dogs out to run. Apparently she underestimated the on-coming snowstorm and ended up snuggling with her dogs for 3 days on this porch until the storm subsided. There is no cell phone service in the park, so no one knew she was there, but she had plenty of provisions on her sled to make it through. Quite an adventurer, that gal! 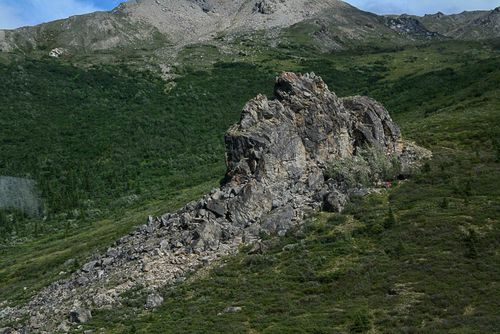 It was an awesome day, but after 8 hours on a school bus (we did get 3 bathroom breaks) I was ready to stretch my legs and move around. 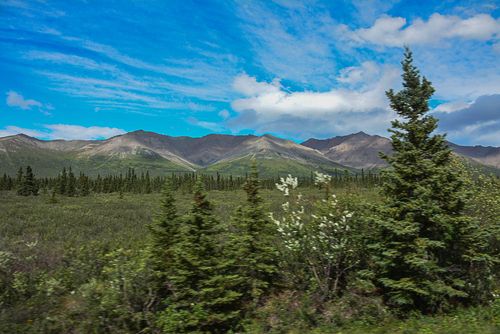 One of Alaska's amazing places, and photos can't begin to do it justice...