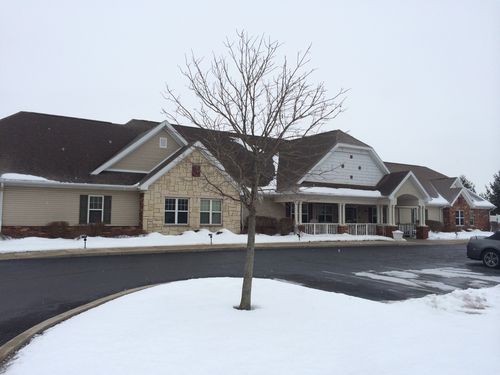 Finally, after 4 agonizing weeks in the hospital psych unit, Dad was transferred yesterday to his new "home."

I took this photo on our first visit there, soon after he was admitted to the hospital...thankfully all that snow is now gone! 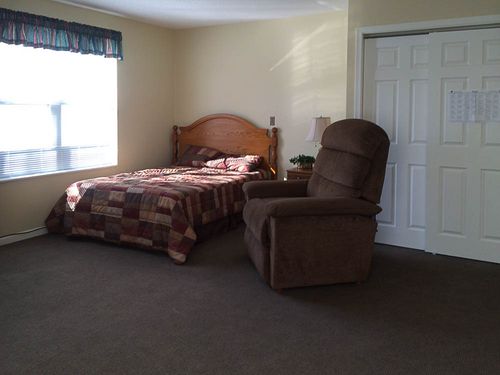 His room is very nice with two big windows to let the sunshine in.  That's what was lacking most in the psych ward...no SUNSHINE and its mood-lifting ways! 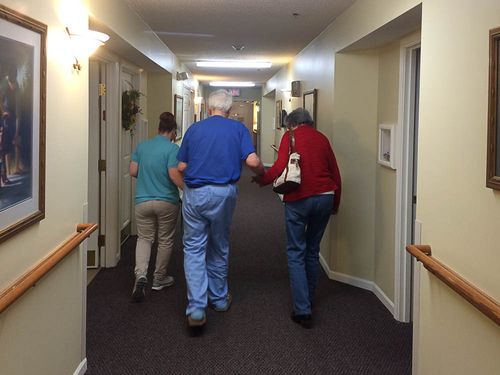 It did my heart good to see Dad and Mama walking together!  He was in a pleasant mood and seemed to handle his transport (in an ambulance) well.  I know it's going to take awhile for him to settle into his new surroundings and routine, but we feel so good about where he is now and the wonderful people there who will be caring for him. 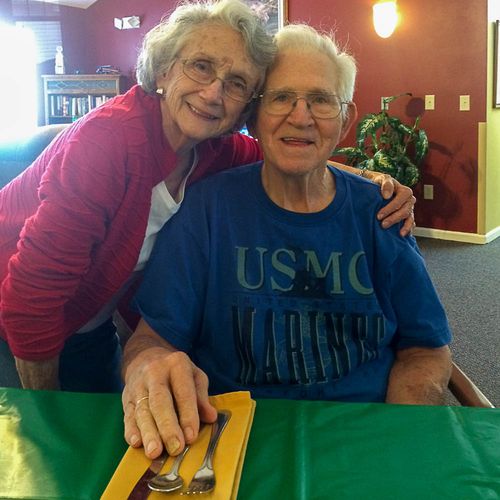 The staff even set up a special table for us to eat his first dinner there with him. One funny incident, though. They use nice heavy silverware and cloth napkins. My place setting happened to have a spoon with a fancy curlicue design on the handle.  He immediately reached over and stole my spoon and stacked it inside his.  Guess he wanted the fancy spoon!  Just like a little child...

But he was starved and wolfed down his portion and most of mine and Mama's too! After dinner, he did get a little agitated when Mama tried to put his few clothing items in his dresser, grabbing them from her hands and stuffing them back in the bag to carry around.  I think he thought he was leaving with us. We had to get a nurse to distract him so we could leave, but I'm guessing as soon as we were out of sight he forgot we had even been there.

It's the tiny blessing of Alzheimer's.  Dad doesn't remember what he's missing. I've never once heard him ask about home or anything related to it.  Out of sight, out of mind. As heart-breaking as that is, I'm so thankful he isn't clinging to us and begging to go home. How much harder that would be!

But I slept better and I know Mama did too, knowing Dad was finally settled in to...