It's syrup season in Indiana!  I don't want to lose this post when I shut down my old blog in the near future, so I'm re-posting this from my visit to my cousins' Stockberger Sweetfarm last March. 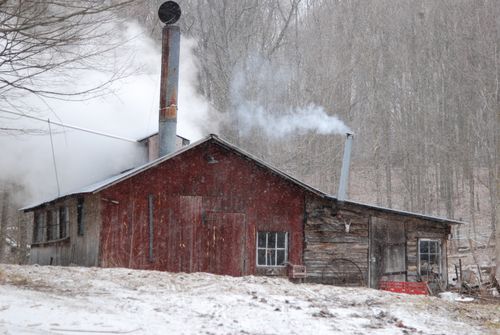 I wasn't prepared for the wave of nostalgia that washed over me as I pulled into the driveway.

I'd been here many, many times in years long gone by...it was all so very familiar but suddenly so new as well, like I'd stepped back in time to my childhood when Daddy would take us with him to the sugarhouse. 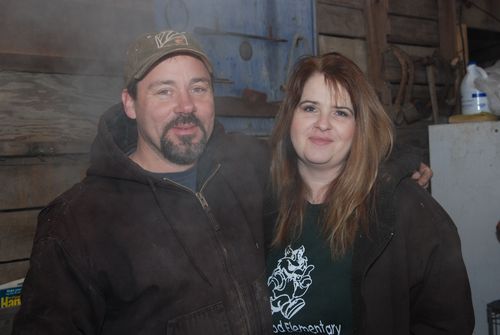 My cousin Bill was just an ornery young boy then.  He and his beautiful wife Cindy are carrying on the maple syrup family tradition...the third generation in this sugarhouse. 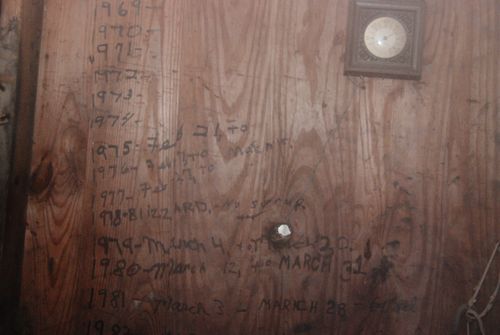 Bill's grandpa, my Great-Uncle Fred, built this sugarhouse back in 1962.  Over the past 50 years, a whole lot of syrup has run through this shack...and a whole lot of wonderful family memories have been built here as well.

Love the record-keeping on the inside wall!  Bill says he remembers standing on his tiptoes to write down the 1976 stats, his family coming to our house (I was in college at IU then) when Indiana won the national title in college basketball.  And we all remember the legendary Blizzard of 1978, when this very sugarhouse was pretty much buried in snow.  No syrup that year. 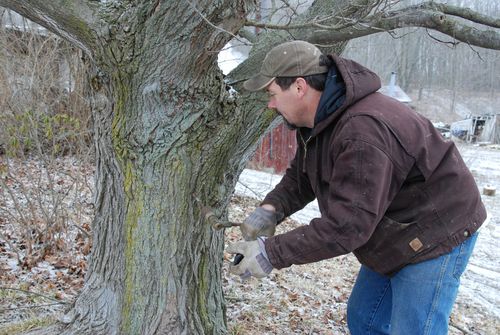 Of course, it all starts with the maple trees.  Usually in February, sometimes earlier, the sap begins to run.  Back in the day, Uncle Fred would use a hand-drill to tap the maples. 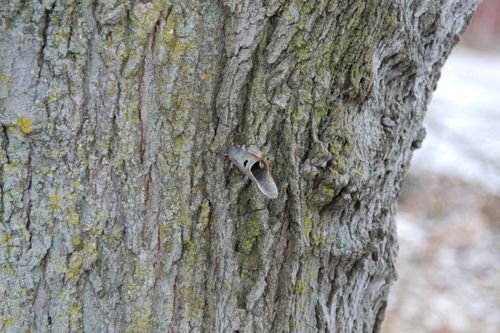 These days, things are done a little differently, but Bill likes to tap a few trees the old-school way to keep the traditions alive. 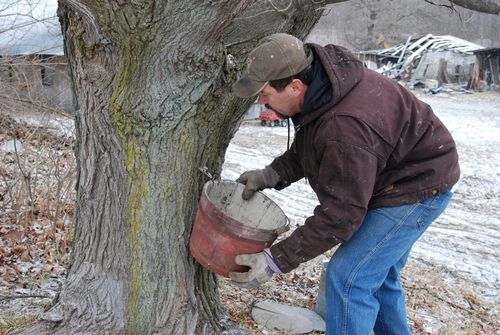 Those antique painted wooden sap buckets are treasures.  If you ever decide to get rid of them, toss a few my way, Bill!  Oh the stories those old painted buckets could tell... 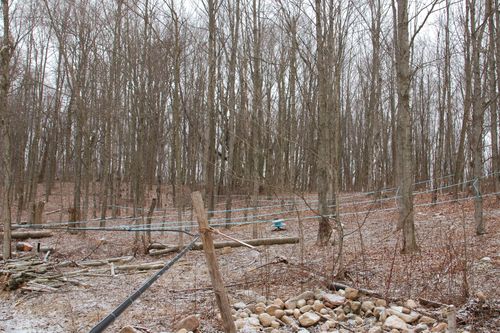 All that schlepping through the woods collecting sap buckets is very time-consuming and a whole lot of work for one guy, so a few years ago Bill gave in to more modern methods and tubed the trees.

Long blue tubing zig-zags through the woods, the sap running into the tubes and converging together into a bigger black hose... 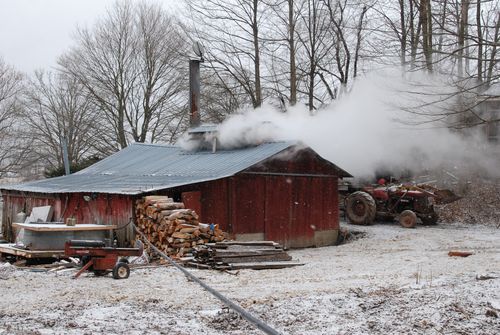 ...that carries it into a holding tank of sap at the rear of the sugarhouse.

Not as nostalgic, but it sure beats all that bucket work and mess! 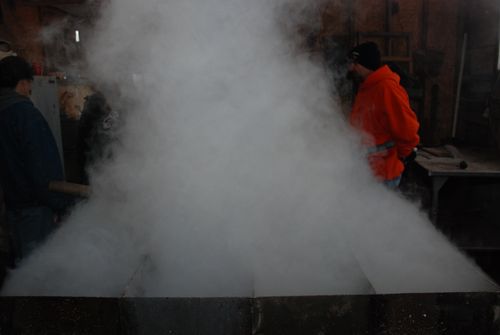 The sap feeds down through the hose into the big syrup-cooking thing-a-ma-jiggy.

(Forgive me, but I'm not going to get all technical here.  Bill asked me if I wanted the short explanation or the detailed one, and I opted for the basic, non-technical version, so my syrup-making jargon is lacking.  But I'm fairly certain this is NOT called a syrup-cooking-thing-a-ma-jiggy....)

For lack of proper terminology, I'll just call it a cooking vat. 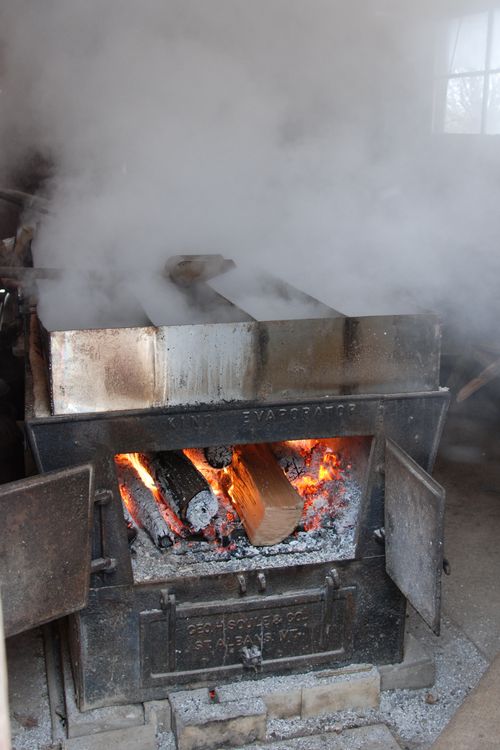 This vat, which is heated by wood, boils the sap down by slowly meandering it through a series of maze-like pans as it continually thickens, a process that takes several hours. 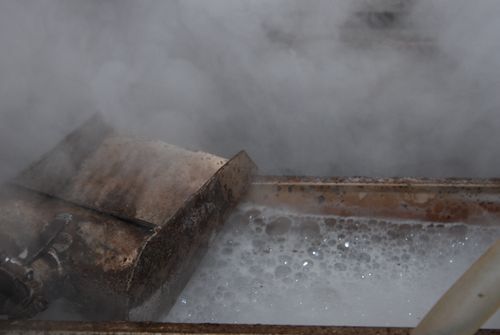 Boil, baby, boil...the sap is bubbling early in the cooking process.  As you can see, it's quite steamy inside the sugarhouse and smells oh-so-heavenly! 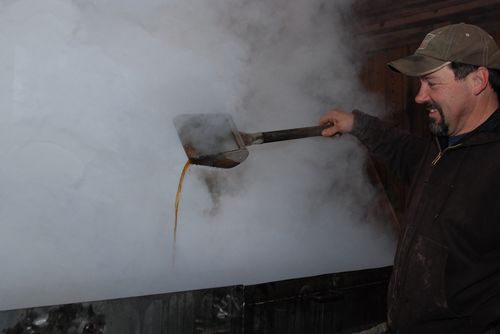 Bill is constantly throwing wood into the stove and checking the thickness of the syrup to see when it is just right.

Apparently, ONLY A MAN can determine that point of perfection...my cousin Lisa (Bill's sister who has helped make syrup her whole life!) said many a woman has thought the syrup was ready, but women are "not allowed" to make that definitive determination.  Guess that's part of the family tradition...who says there is equal opportunity inside the sugarhouse?! 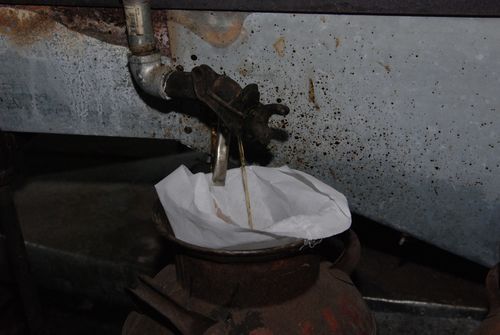 After that determination has been made by the man in charge (Bill!), the syrup is strained of any impurities and collected in an old milk can.

A long, slow, laborious process pretty much unchanged (except for a few concessions to the times) since the early pioneers...and I'm so proud of Bill and his family for keeping the time-honored tradition alive.  And...the sweet delicious result is totally worth all the trouble! 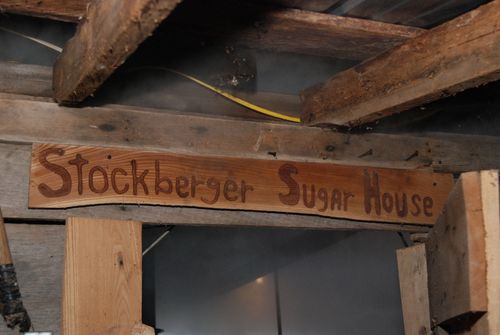