They Taught Us to Fly

Today marks the anniversary of one of the greatest feats of mankind, a feat which changed our world forever.  Nearly every one of you has benefited from this incredible achievement.  What happened 110 years ago today? 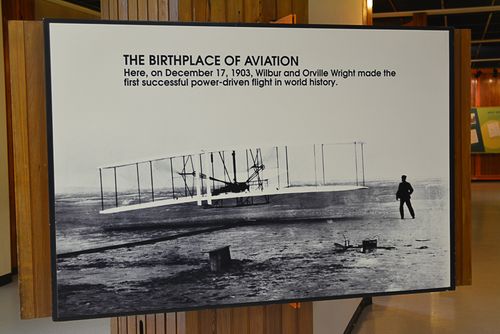 What else could it possibly be than the first airplane flight in the history of mankind, right on the coast of North Carolina's Outer Banks! 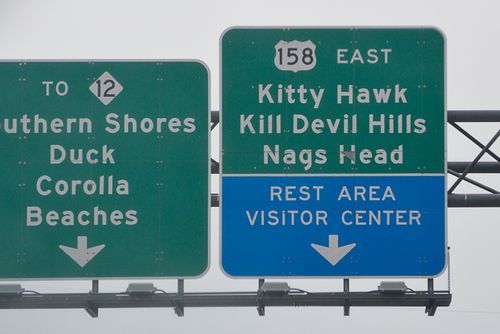 Since none of the four of us had ever been there, John, Barb, Kim, and I had scheduled a stop at Kitty Hawk to see the very spot where history was made. 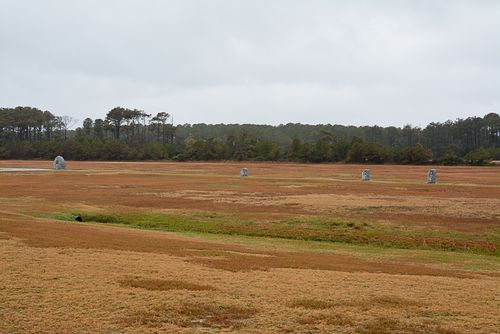 And of course, in our quest to be perfectly authentic, we chose the WINDIEST day we could find to go there.  And it was a bit nippy too.  Just like I'm sure it was when Orville and Wilbur made the first flights.  We'd never want to go there on a calm, sunny, warm day...oh no, we're all about authentic!  :)

Barb and I both agreed it didn't look like what we expected...not very beachy-looking.  But we learned that all that groundcover and shrubs has been planted since then, an effort to keep the coastline from eroding away. 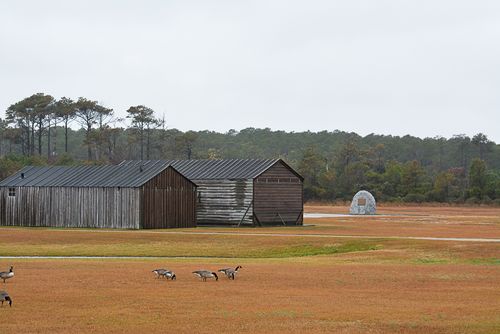 I'd never really thought about it before, but the Wright brothers lived and built the plane right there on site.  Of course they'd have to.  These buildings are replicas of those original structures and then that big rock is the spot where the plane was launched,... 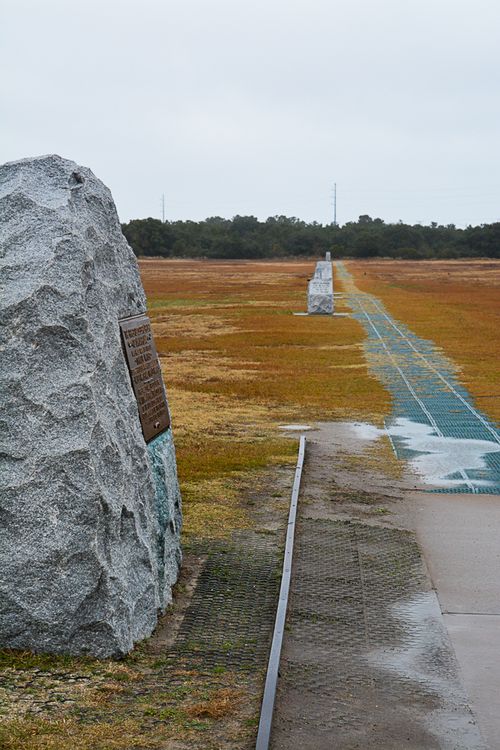 ...guided by that very rail.

There were 3 successful flights that day (three stones mark the 3 distances), each one being a little longer than the previous until on the last one the plane crash-landed and was damaged beyond immediate repair. 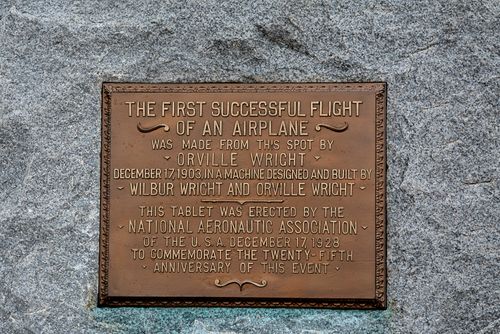 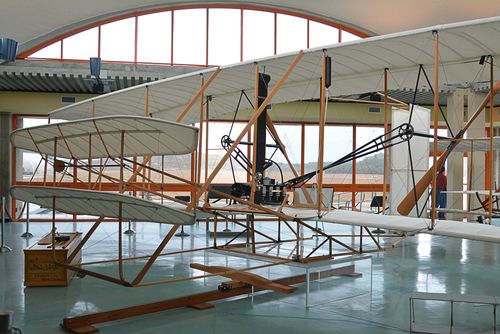 Like all national parks, there was a nice little museum with a replica of the first airplane and a park ranger that was thrilled to have an audience on a not-so-gorgeous December day.

Being raised on the County Line just a few miles from the birthplace of Wilbur Wright, I tried to share Barb's and my Wright brothers connection with the ranger, but he immediately chimed in that he was from Ohio (as adults the Wrights lived in Dayton) and boasted about being an Ohio State alumnus (gag, gag), at which point we made our quick exit since Ohio State is not on our list of favorite universities. 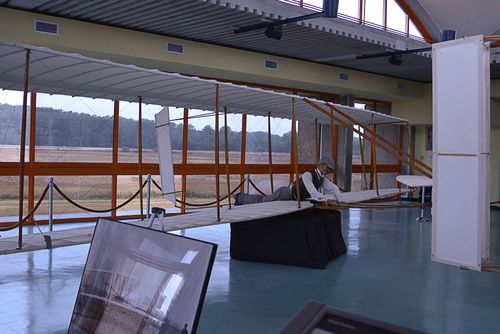 Before they ever attempted the motorized plane flight, Wilbur and Orville made over 1000 glider flights to learn about aerodynamics and how to control a flying machine,... 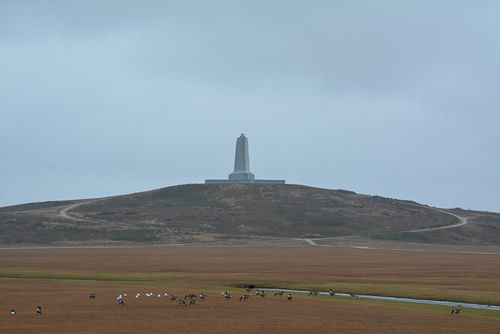 ...gliding from this sandy knoll nearby. 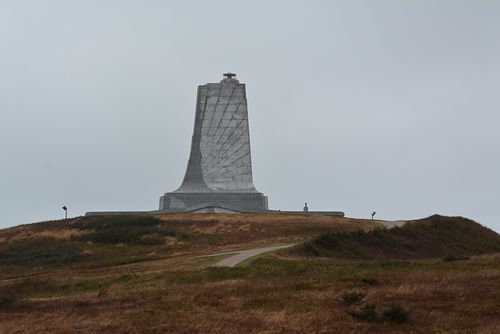 We could have walked up to the top of it, but we were content to use our zoom lenses and capture the monument from afar. 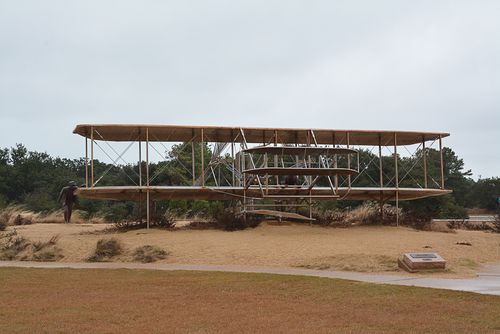 I guess like most of us I hadn't really thought that much about the miracle of flying.  Oh, when I get aboard one of those huge jumbo jets to travel to the other side of the world, it does amaze me that such a big heavy machine can get off the ground.  But most of the time, we just take it for granted.

But for the first time I imagined what it really was like to be Wilbur and Orville, men with a seemingly impossible dream who spent their whole lives being laughed at and scoffed, facing failure after failure, yet still believing it could be done and never giving up. 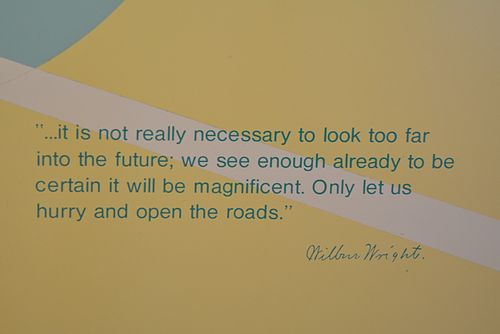 They were brilliant men, geniuses, and dreamers for sure.  I love this quote by Wilbur!  If only they could see our modern flying machines now...but I doubt they'd be that surprised. 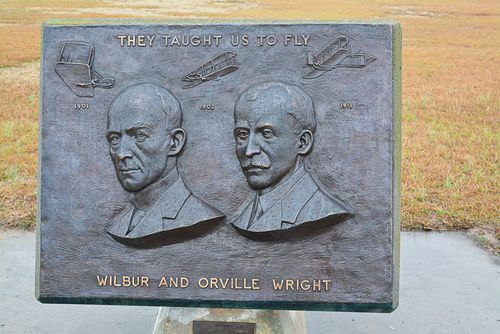 No doubt about it, these two men from humble midwestern beginnings, changed the world.

They taught us to fly.