Home Archives Profile Portfolio
A Tribute to Two Extraordinary Able-Minded Men
Getting There is Half the Fun (?) 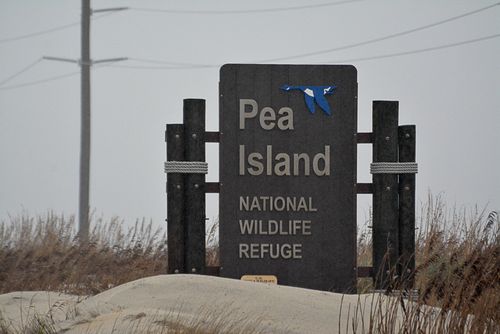 On the northern end of Hatteras Island is a wildlife refuge known for its huge flocks of overwintering waterfowl (and you know how I love waterfowl!), a place known as Pea Island.

Pea SOUP Island would have been a more appropriate name for it the morning we were there. 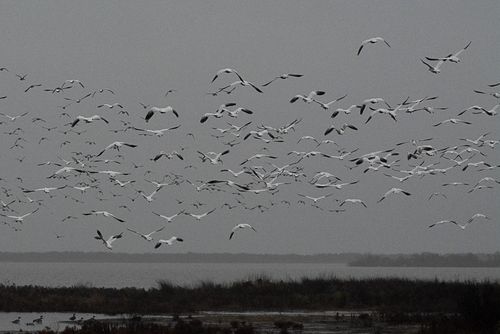 We had scoped it out the day before (when we were stranded on the island...more on that in tomorrow's post...), a damp drizzly day, and were thrilled to see huge flocks of snow geese and tundra swans who had migrated south from their arctic homes to spend the winter there.

But it was too wet for our cameras and too yucky for our liking, so we decided to come back the next day when the forecast looked much more promising...as in 70 degrees and clear skies. 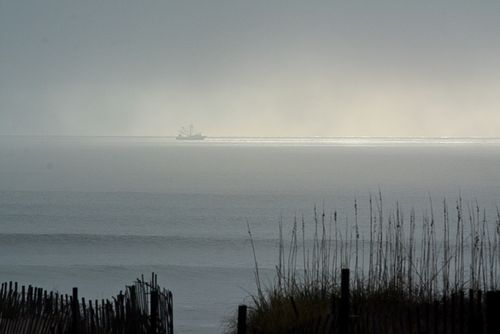 That next day dawned a crystal-clear morning that I spent down on the beach photographing a postcard-perfect sunrise, dolphins frolicking, and lots and lots of shorebirds.  Then, just as we were heading toward our planned Pea Island excursion, the fog rolled in.

Thick, heavy fog...just like that...brilliant blue skies completely blotted out by dense fog.  I guess it happens a lot around those parts, but it was amazing to us how quickly things changed. 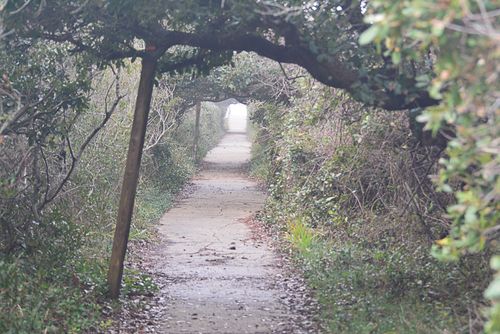 But stalwart adventurers that we are, the four of us (my sister Barb, husband John, Kim, and me) hopped into the car with the hopes that Pea Island would be fog-free.  We had planned to walk the 4-mile trail along the waters, taking lots of fabulous photos of the flocks of waterbirds we'd surely see. 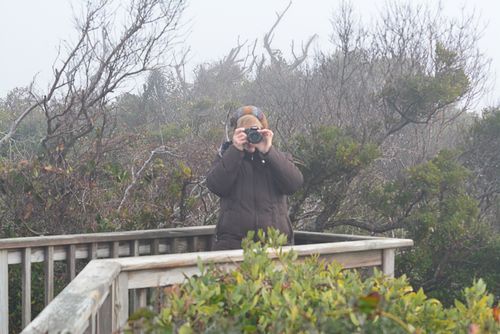 Or of each other....since with the fog, even though we could hear a gazillion birds all around us, we could barely see them. 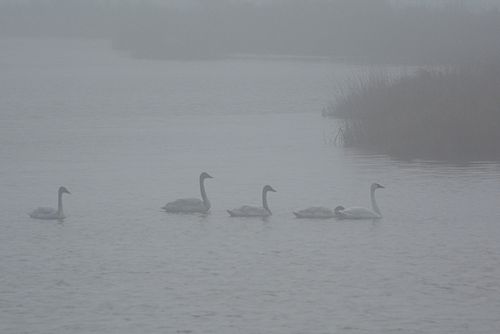 Hard for me to get too excited about shots like this, although the fog effect is cool.  Unless, of course, one wants to see the swans...

Kim entitled this shot "Swans in the Mist." 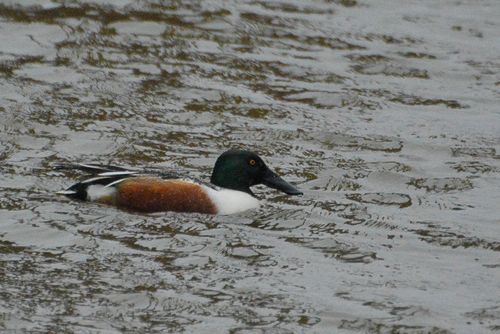 But with the magic of Lightroom (my photo editing software), I did manage to salvage a few usable images. 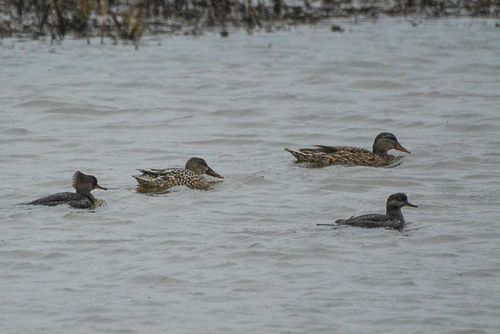 ...following his two lovely lady shovelers and a couple of smaller mergansers. Pelicans, both white and brown,... 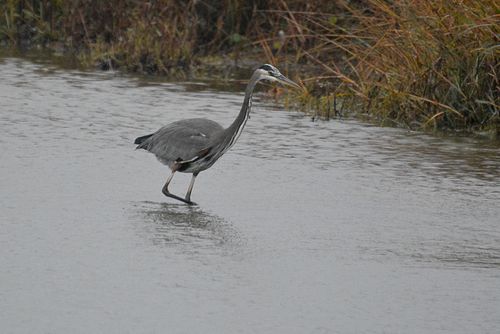 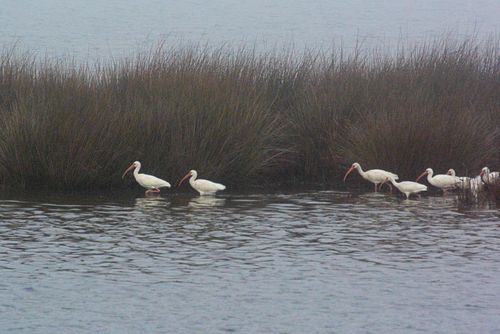 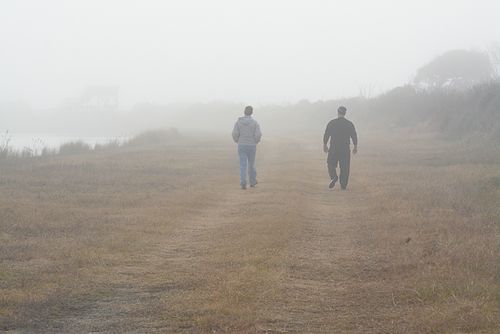 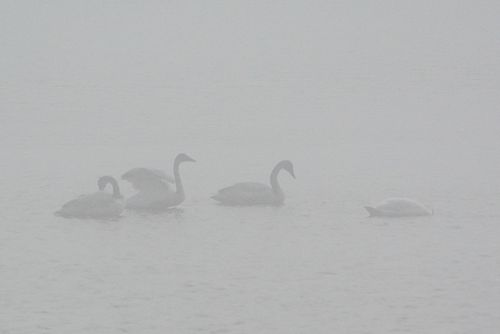 For some reason, I love this photo! 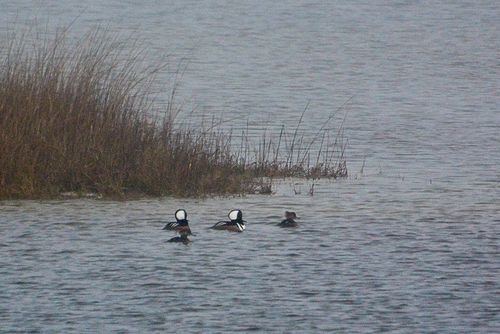 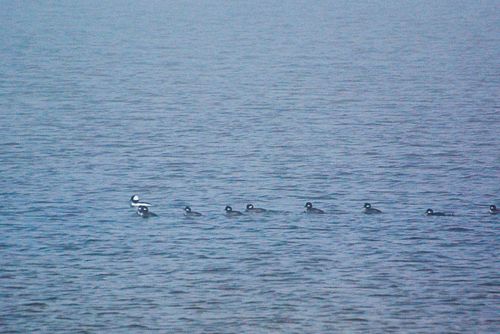 ...a flotilla of buffleheads... 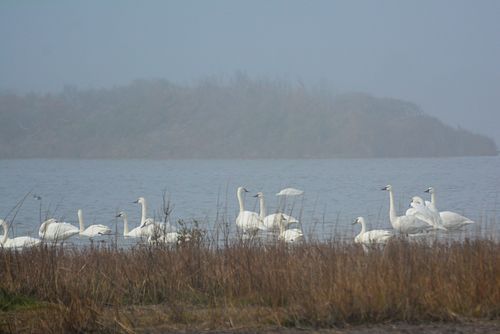 After a disappointing morning on the foggy trail, we decided to stop along the deserted highway and walk closer to get a few shots of the swans. 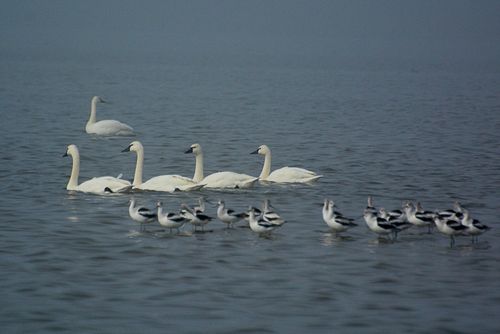 Those shorebirds in front are equally as beautiful, the American avocet.  Most of the year their heads are rust-colored, but in winter they turn white. 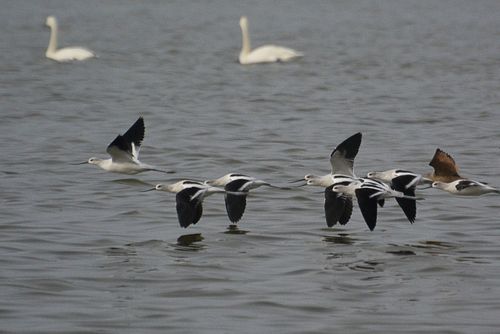 Gorgeous plumage...and so graceful and beautiful in flight! 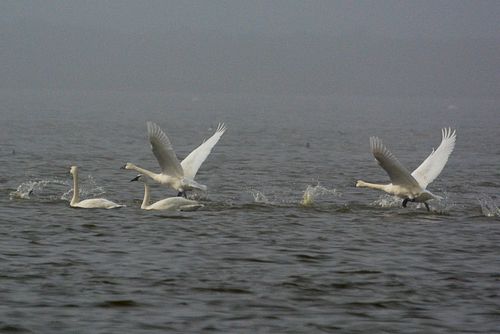 The swans however, as graceful as they look on the water, are very awkward getting themselves airborne. 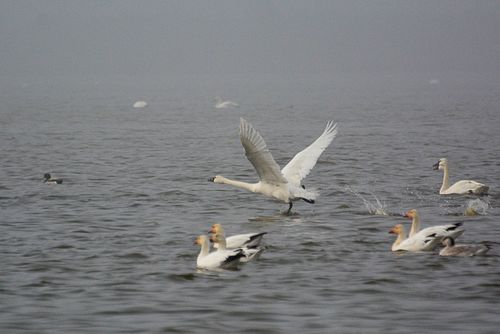 Those white birds in front are snow geese, also found in huge flocks overwintering on the Outer Banks. 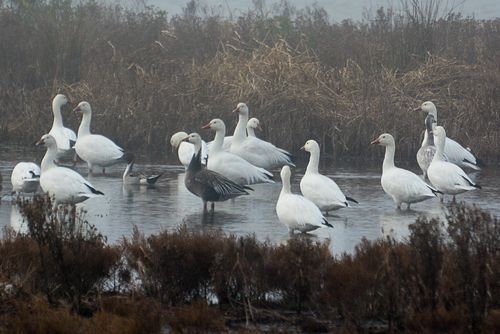 They also breed in the arctic tundra, flying thousands of miles in enormous waving flocks high in the sky to spend the winter in the south.

The darker one in the middle is called a blue goose, a subspecies of the snow goose.

Crazy the stuff you learn here, isn't it?! 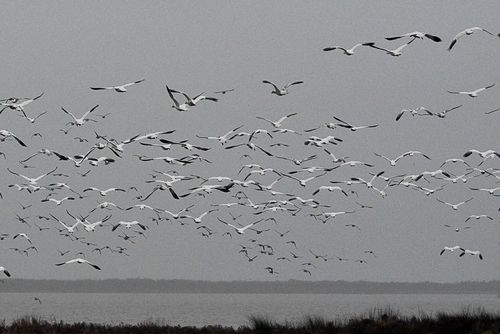 Barb's hollerin' spooked them, making for some great shots of them flying...what an incredible sight! 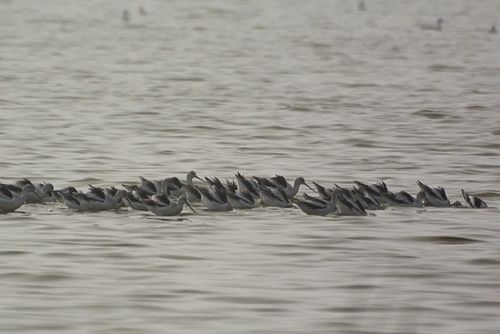 Despite the fog, we saw some magnificent birds that morning on...