Home Archives Profile Portfolio
Getting There is Half the Fun (?)
Boys, Babies, Books, Basketball, and Beddy-Bye

Odds and Ends from the OBX 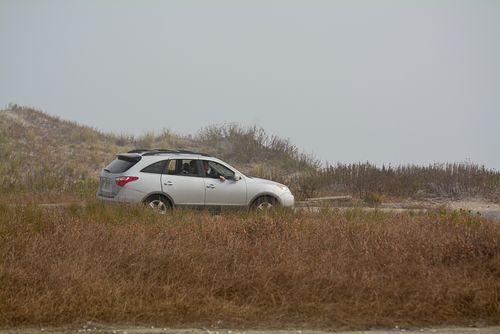 Before we say farewell to the wild, beautiful OBX (that stands for "Outer Banks," Mama...), a few random odds and ends to share. 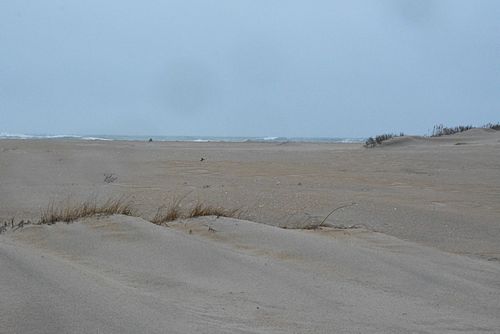 I am so, so thankful that our national park service has made sure this national seashore area stays undeveloped and unspoiled.  There are literally miles upon miles of nothing but sand dunes and water on either side of NC 12 that runs through this ribbon of precious barrier island territory. 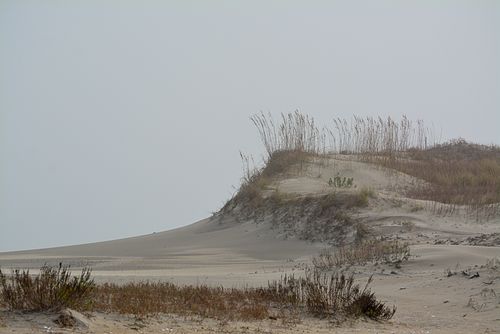 And it was especially nice when we were there because there were only a handful of people on the entire island, and nearly all of them live there fulltime and weren't even on the beaches.  We loved having our own perfect spot in God's awesome creation all to ourselves for a few days! 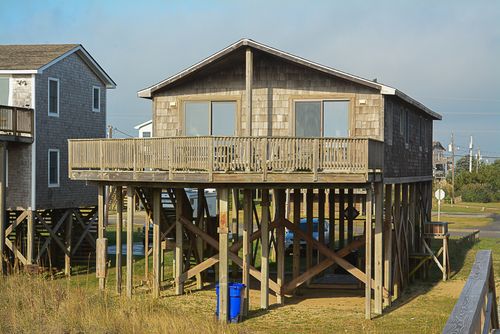 The rental house where we stayed was....well, let's just say it had a GREAT location.  And a whole lot of character...the most notable of which was that it constantly rocked, like a boat on the water.

The curtains swayed, the blinds rattled, the not-supposed-to-be-dangling-but-they-were light fixtures were like pendulums.  And Barb, who can be a bit dramatic sometimes, swore that the toilets had whitecaps in them.  Anyway, we never could decide if that was normal here (since the houses are really just built on a big pile of sand, and we all know what the Bible says about building your house on sand...) or if our place was about to become one with the sea.

I predict that the next hurricane that rolls through will be the last one this beach house will ever see. 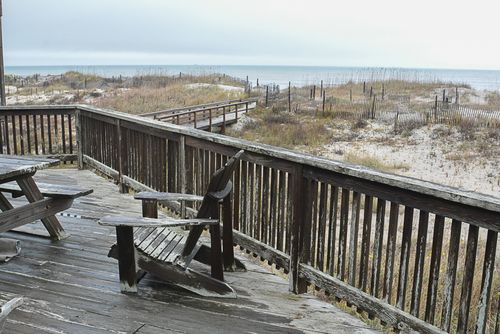 But when you can stand on the deck and have this view....and just a boardwalk away from the seashore...

I tried to convince Kim to buy this house for me and I'd fix it up so cute!  But so far he hasn't bitten... 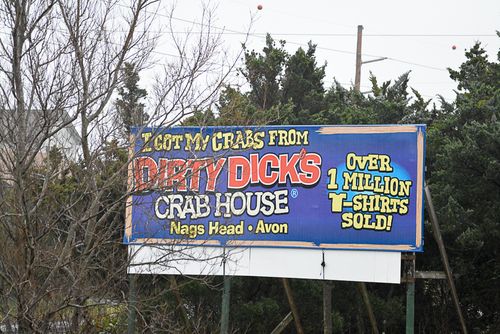 We had been pretty pumped about getting some great seafood while we were there, and could hardly wait to try out famous Dirty Dick's (I mean, who wouldn't be intrigued to eat at a place with a name like that?!).  But alas, although many wonderful-looking seafood restaurants (no national chains, by the way, on the entire island) lined NC 12, all of them are closed for the winter.

When we arrived on Hatteras Island around dinner time, Barb and I asked the young gals working at the realty office for a restaurant recommendation for dinner.  They both just stared dumb-founded back.  So I said, "If you were going on a Saturday night date, where would you go for supper?"  One of the girls responded, "Ma'am, no one goes out to eat between Thanksgiving and March.  Nothing's open."

Nice.  We knew most things would be shut down for the winter, but we assumed that the locals had to eat somewhere.  And we did eventually find 3 or 4 little diners, bars, or burger joints that were open...not exactly what we had hoped for. 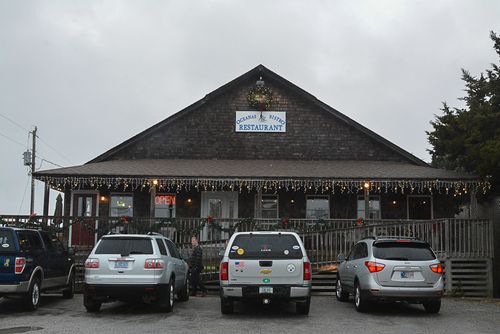 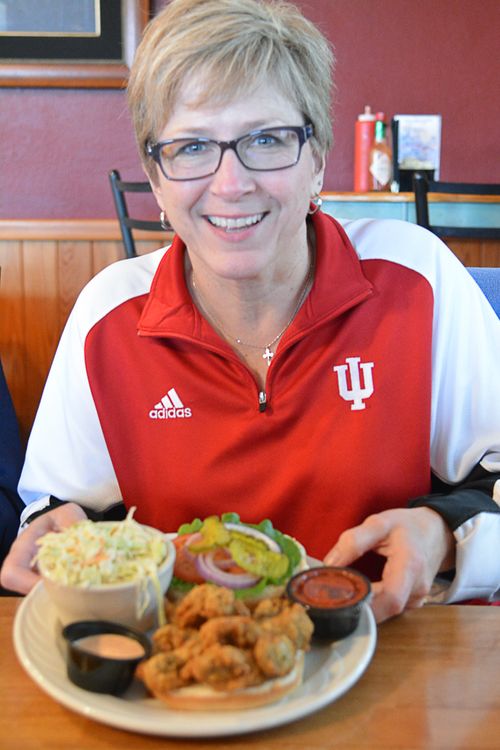 When's the last time you had a fried oyster sandwich?  And I had a couple of shrimp burgers.  But overall, not the exquisite seafood cuisine that one might expect when staying on an island. 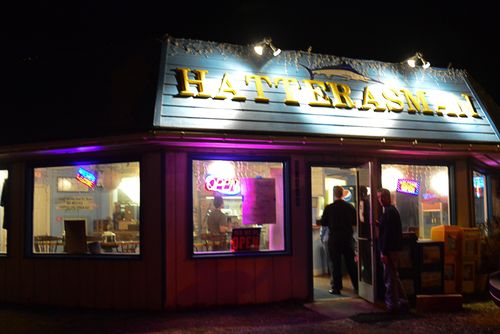 Even the Hatterasman, with all its quaint local charm, was disappointingly out of fish for sandwiches.  Seriously???!!!!  Just a short walk away is a whole ocean full of them! 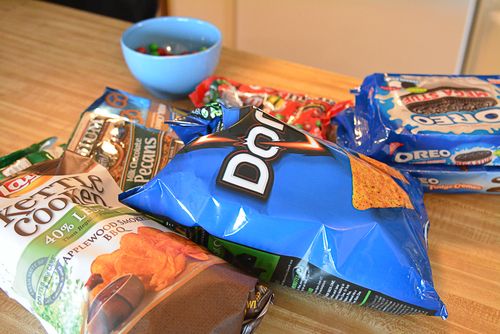 We hit the local grocery store and picked up some staples so we wouldn't starve. 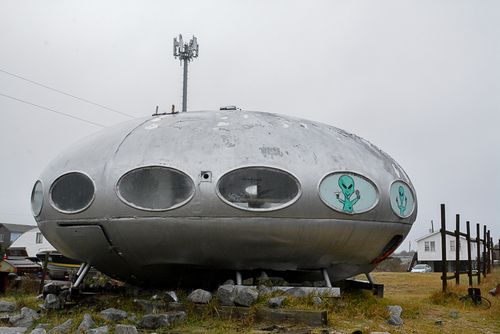 Who knows why this is on the island?  But we were intrigued enough to stop for a photo.... 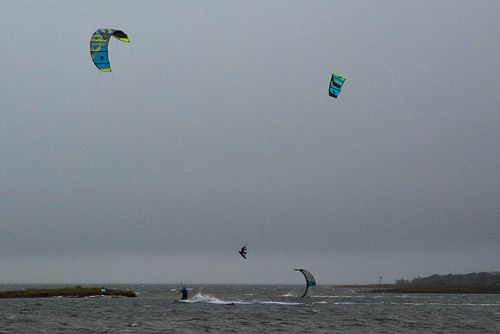 About the only other people we saw out were the kiteboarders, who seemed to love the area for their sport. 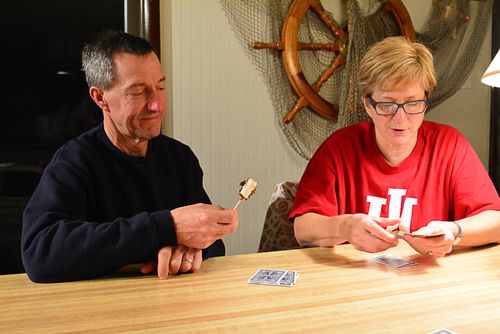 Our evenings were filled with playing games, eating snacks we certainly didn't need... 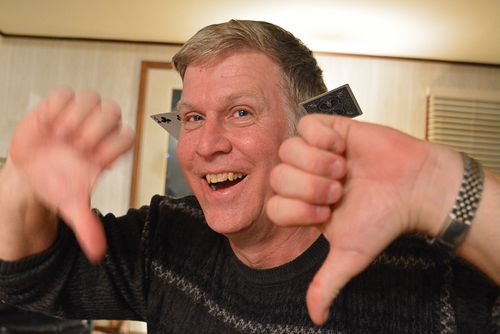 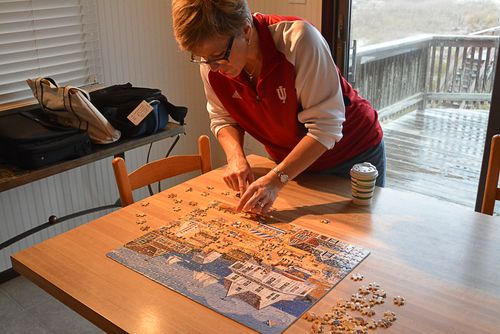 Barb and I put together 2 1/2 puzzles.  In a history-making moment, we GAVE UP on the third one when we realized that lots of pieces were truly missing.  Rarely do two House girls give up on anything! 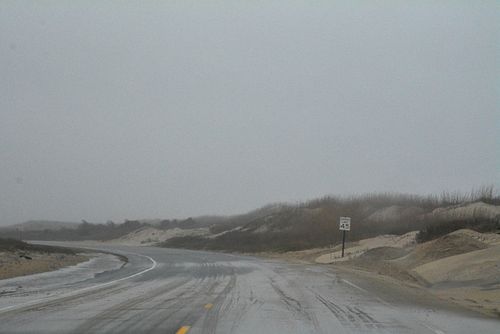 It is a constant battle to keep NC 12 open, as the sand is continually blowing across it much like snow drifts on our roads. 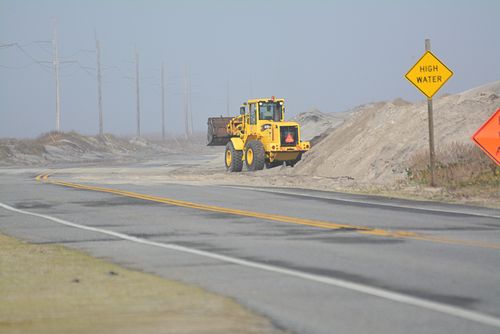 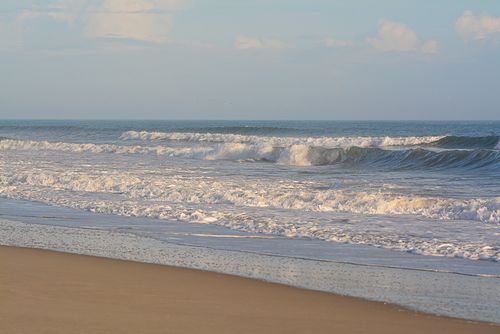 Such a beautiful, beautiful place...and we shall surely return someday...