Getting There is Half the Fun (?) 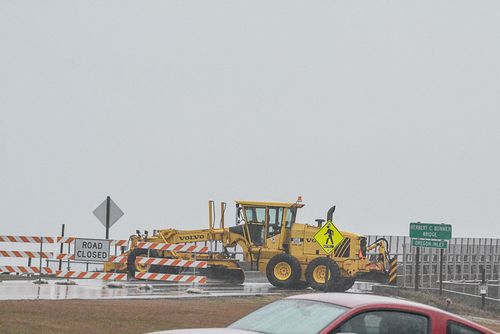 Before we even left Indiana, we knew Bonner Bridge was out.

Bonner Bridge is the only connection between Hatteras Island and the mainland.  Just a couple of days before we left, we found out that Bonner Bridge had been closed due to safety issues with the pilings and a 1-minute ride across the bridge was replaced by a 2-hour ferry ride from Stumpy Point (yes, that's its name...and we got a lot of mileage out of that name too...saw a lot of Stumpys at Stumpy's Point) to Rodanthe.

All those names probably mean nothing to you, unless you're familiar with the Outer Banks or a huge fan of author Nicholas Sparks who wrote Road to Rodanthe.  But let me just tell you that when your only means of getting to and from Hatteras Island involves a 2-hour ferry ride (that's just one-way!), it changes everything. 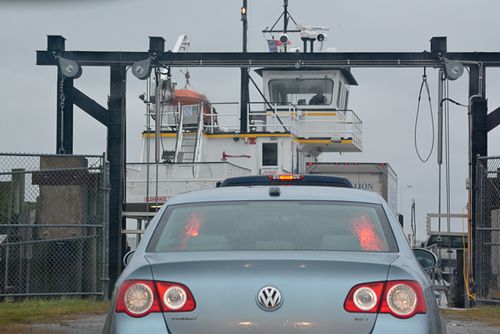 All four of us were a little bit excited about that first ferry ride...we were off on our big adventure!  But quickly reality set in....

First of all, you have to get your car in line early (45 minutes to an hour early!) to be assured of a spot on the ferry.  Then after waiting in your car all that time (and believe me, there is NOTHING to see or do at Stumpy's Point except that ferry), you drive onto the ferry and sit in your car for 2 more hours.  There is a passenger lounge which none of us needed to use, if you know what I mean.  And I suppose we could have gotten out and stood on the ferry if:

1. we could have opened our car doors, which we couldn't since the cars and semis (yes, semis!) were crammed on there with mere inches between the vehicles

2.  it hadn't been either cold, windy, and drizzly or completely dark every time we rode

So we didn't get out, staying put huddled in the van the whole time.  Which got very old in a hurry... 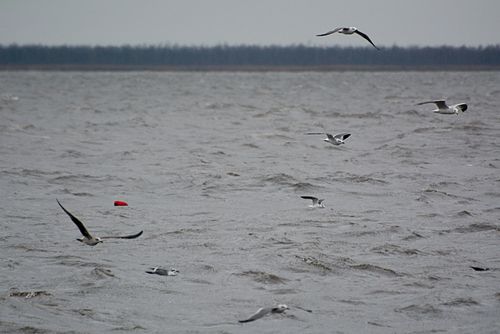 Our only entertainment (besides each other, which was running low after being in the car together for 2 days...) were the seagulls that continually flew alongside us, I'm sure hoping someone would throw them some treats. 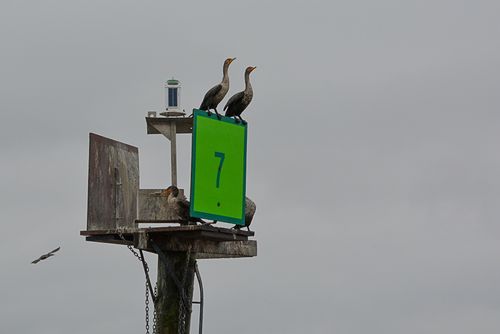 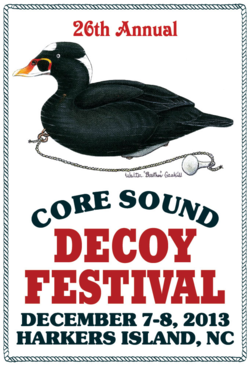 One of the primary reasons for our trip to begin with was our desire to go to the Core Sound Decoy Festival which all of us have enjoyed attending for many years.  Since we couldn't leave until Friday morning due to work commitments, we planned to go to the festival on Sunday.

Now we knew it'd involve a couple of ferry rides (one comparatively short) between Hatteras/Ocracoke/Swan Quarter, but we had a good, doable plan in place, so we got up really early to get in line for the first ferry of the day departing at 6 am. for Ocracoke.

After waiting in our cars and watching the arriving ferry unload its vehicles (talk about an early ferry!), we waited and waited past 6:00 and then some of the cars in front of us began turning around and leaving.  John asked someone and found out that the ferries were shutting down indefinitely due to dangerous currents.

Not just that ferry but all the ferries.

Our plans of going to the decoy festival were trashed.  It just wasn't going to happen this year.

No bridge.  No ferries.  No way off the island.

We were stranded on Hatteras Island.

When we went to Cape Hatteras Lighthouse later that day and told the park ranger about our ferry adventures, she was flabbergasted that they were closed.  In fact, I'm not sure she believed us because she phoned the NC Department of Transportation while we were there to verify it.  She says the ferries NEVER shut down, even through hurricanes they try to stay open if at all possible and that day there wasn't even any wind!

Yep, the one time we come down and have to rely on the ferries the whole system shuts down... 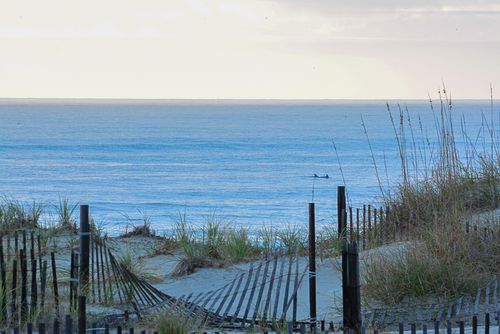 Now, granted, I can think of lots worse places to be stranded!  And it turned out being a wonderfully fun day for all of us...even though we didn't get to the decoy festival as we'd planned.

But hey, we're go-with-the-flow kind of folks....(for anyone who knows any of us, this is SO not the case...I think God was giving us a few little lessons on Hatteras).... 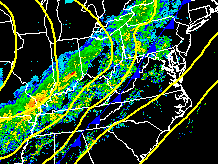 As if we hadn't already been tested before we even left Indiana...

The evening of December 5, central and southern Indiana was hit with a huge winter storm that coated the roads with ice and several inches of snow.

See that red blob on the weather map?  That's about where Barb and John live and, bless his heart, on his way home from work that evening to pick up Barb and head to our house so we could leave for NC, John's truck spun out on the ice and did some major damage to his truck besides scaring him to death.  He barely was able to get home that evening and wasn't about to venture back out on the treacherous roads.

I was even afraid they might back out on us considering everything, but thankfully they didn't.  Barb said it never even crossed their minds to bail out.  We've all been so looking forward to this trip for months, we weren't about to let anything deter us!

When they finally did arrive at our house Friday morning, after crawling along in their car in terrible road conditions, we still had to get through most of Ohio before the roads improved.

Let's just say that even though our vacation was wonderful and we so enjoyed the beach and each other, the transportation issues and logistics were a bit frustrating at times.

And...for the record...Bonner Bridge was scheduled to reopen the day after we left.  Of course it was....