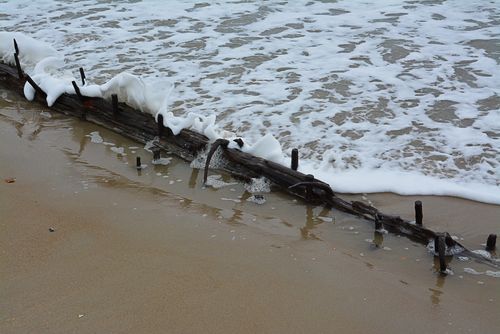 Known as "the Graveyard of the Atlantic," the waters off the coast of Hatteras Island are treacherous to navigate and over 1000 ships have been lost in these waters since the 1500s.  Crazy unpredictable currents, high winds, and dense fog (we experienced all three in the short time we were there!) make it a perilous area for sailors.

In fact, on the beach just outside our rental house we saw this shipwreck, known as the Flambeau Road shipwreck, from the 1800s.  Just the very top of it was visible while we were there, but from what I've read there are times when all 153 feet of it is completely uncovered and it looks like someone has just set it up on the beach.  Then just a few weeks later, the shifting sands of the ever-changing coastline have buried it again and there is no sign that it is even hiding below. 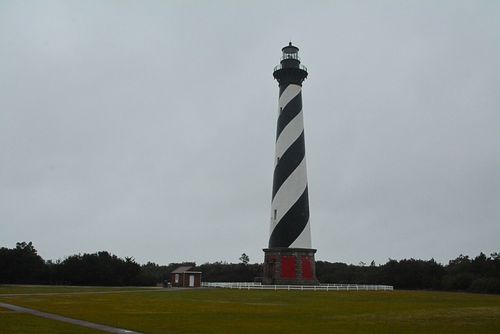 Shipwrecks are a part of Outer Banks history and lore, but doubtless thousands more ships and sailors would have met their tragic watery fate had it not been for the trusty faithful beacon of the Cape Hatteras Lighthouse. 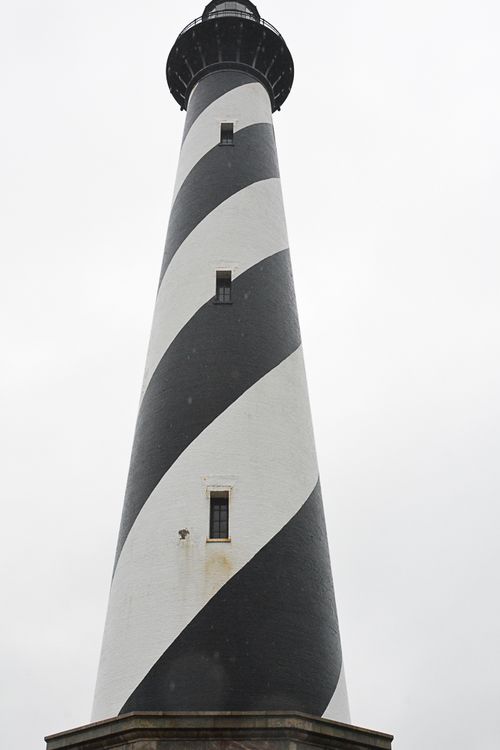 Of all the many lighthouses on the Carolina coast, Hatteras is the most iconic with its black and white spiral design.  Each lighthouse has its own distinct pattern so, back in the days before sophisticated controls and satellite systems, sailors could recognize where they were on the coast by the pattern on the lighthouse. 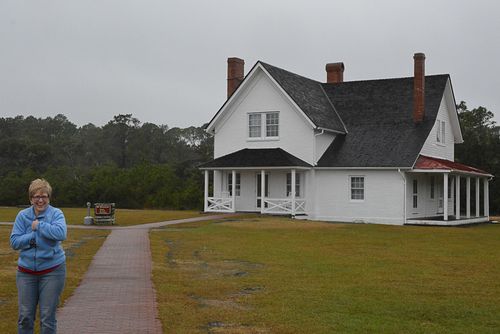 Today lighthouses are run electronically, but back in the day every lighthouse had its keeper who was responsible for filling the lamp with oil (originally whale oil) and keeping it lit.  Barb is by one of the Hatteras keeper's quarters. 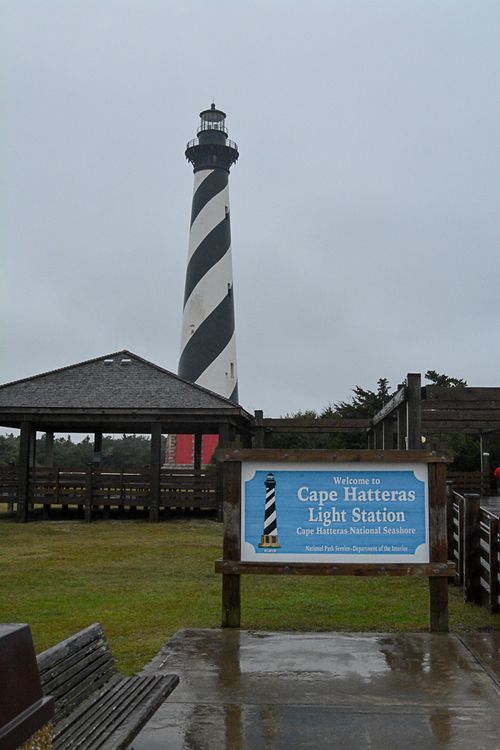 We were there on a drizzly, foggy day much like weather conditions that caused so many of those ships to wreck.  Days like this are when a lighthouse is so critical for the safety of passing vessels. 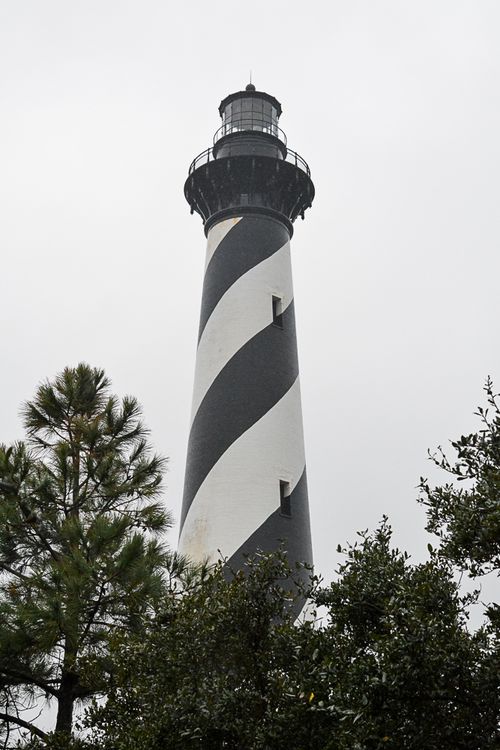 And while I had hoped for some gorgeous lighthouse shots on a crystal clear day with a few puffy clouds in a brilliant blue sky, we were there on a much more authentic day.  I mean, who needs a lighthouse on a sparkling clear day???  At least, that's what I kept telling myself...we're all about authentic. 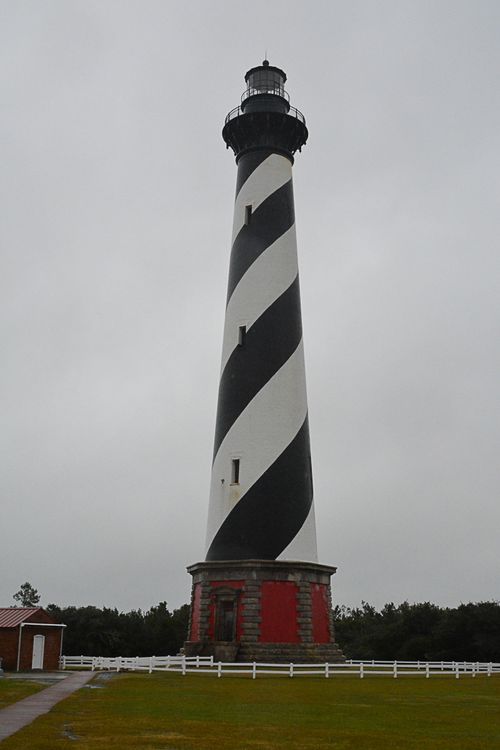 A couple of facts I learned:

Fourteen years ago, this lighthouse was moved further inland after the changing shoreline made it perilously close to tumbling into the Atlantic.  It took 3 weeks to slowly inch it the 1/2 mile inland.  The oil house and keeper's quarters were moved as well. 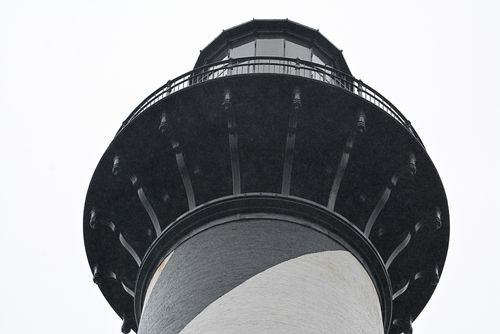 We were a little disappointed that we couldn't climb to the top since we were there during the off-season when the lighthouse itself is closed.  The park ranger told us we could "pretend" and climb the stairs in the house 15 times to replicate climbing up the lighthouse.

I would have done it, but the view would not have been the same.  Really, I would have... 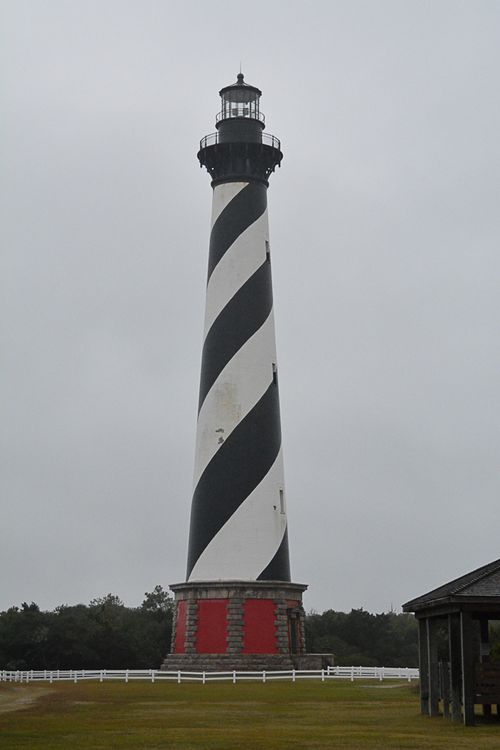 It's one of those places that I've always wanted see, so I'm glad we were able to go.  Even if it was nasty, foggy, and rainy.  Authentic.

And it continues to shine its welcome beacon to sailors passing by...