This past week has been a very sad, difficult week for my family.

Two of my uncles on Dad's side of the family have passed away within 5 days of each other. 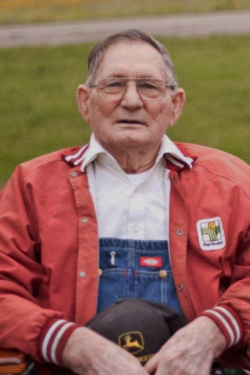 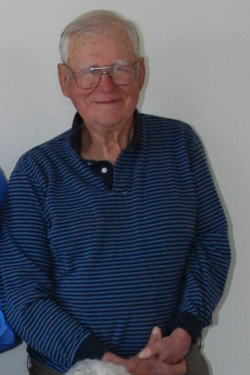 Both of them were hard-working men, sacrificing daily to take care of their families.  Uncle Windle was a successful farmer, a man of the land, working countless days from before sun-up to long after sun-down tending the earth, owning and operating all sorts of complicated farm machinery.  Uncle Fred went to college and became a businessman, running the successful local Hagerstown Gravel and also owning and operating many types of heavy, earth-moving machinery.

These were not desk-sitting, computer-punching, phone-talking kind of men.  They were strong, active, on-the-go workers who could do (and did!) anything they set their minds to.  "Can't" was never in the vocabulary of either one of them.

Remarkable lives by any standard, yes.  But EXTRAORDINARY lives considering that both of them had significant physical handicaps, as we used to say (before political correctness had us tiptoe-ing around such things) both Uncle Windle and Uncle Fred were crippled.

Uncle Windle had to have his entire leg amputated at the tender age of 17 because of cancer.  Seventeen!!!  Can you even imagine?  An active, athletic young teenager who chose to have his leg amputated over enduring rounds and rounds of chemotherapy back in the early 1950s when cancer treatment was in its infancy itself.  He courageously chose to have his leg amputated, so for the past 62 years he had lived life with an artificial leg.  His most recent prosthetics have been amazingly complex and high-tech, but those early ones were truly "wooden legs."  I can remember as a child going to their house and closing the bathroom door only to discover his extra leg behind the door.  (My younger sister Maria was terrified to even go in their bathroom...today she is a physical therapist who works with such situations all the time...go figure!)

Uncle Fred was born with a severely deformed hand and arm.  Having been an extremely large baby born at home, the firstborn of the family, no one really knows whether it developed abnormally in the womb or there was some sort of injury during the birth.  But either way, his entire life Fred lived with one functional hand.  Because of his handicap, he was never able to participate in sports but that didn't slow him down one iota.  After graduating from high school, he went all the way out to Washington state where he attended college, then came back home to begin his own family and business.  Running the gravel pit (which we all affectionately called it) required using huge machinery with complicated controls and manual transmissions...bulldozers, cranes, backhoes, dump trucks, and lots more that I don't even know the names of...all with essentially one good hand.  Really amazing when you think about it!

As I was reflecting back upon the lives of these two dear uncles of mine and the many, many good times we shared, it suddenly occurred to me what incredible obstacles they both had to overcome during their lives.  To us, they were always just Uncle Windle and Uncle Fred, and we had long ago forgotten about the wooden leg and crippled hand.  They have always just been our uncles, whom we all adored.

And it also occurred to me that neither of them would have EVER expected someone else to take care of them.  They would have rather died than accept lifelong disability payments, like so many people much less handicapped than they were do without shame today.  They took what life presented them and made the very most of it, which turned out to be pretty darn good!

As I sit here typing with tear-filled eyes, I think of the incredible impact both of them had on so very many...their families, friends, and their entire communities.  They loved and were loved, and isn't that what life is all about?

They may not have been able-bodied, but both Uncle Windle and Uncle Fred were most certainly able-minded!  And these past few days our family and the world has lost the bright lights...

Lovely Terry. I'm so sorry to all the Houses for your great losses. You're in our prayers.

Well put Terry. These guys knew the meaning of hard work and what it took to get a job done. I'm proud to say I am a product of my raising because both of these men were influential in my life.

Terry, just a wonderful tribute to your uncles. Uncle Red was undoubtly a force of nature. I remember meeting your uncle Fred when I was a little girl. I'm so sorry for your loss. Your family has been through so much this past week. The strength these two men displayed throughout their lives wiser eps as an example to us all.

Two of the greatest men I will ever presume to know. They were unflagging in their journey through life and showed many how puny the complaints of a "hard life" were. It was tough losing Uncle Windle, though he was so tired from his fight.It was shocking to hear Uncle Fred's life had ended. But we will never realise how many lives these 2 have influenced. Hard to lose, so close together, two prime examples of what a person CAN be, if they put their minds to it.

Growing up in this tightly knitted family has been a blessing. We grew up where kids played outside and sat down when you were in the house. Thus we could sit around and listen to the grown ups discuss all sorts of things. These two men always seemed so serious and intense I was little afraid of them. As I grew up and graduated from the stairsteps, I got to know these two men and enjoyed them very much. Uncle Fred had a sense of humor! He respected those that took care of their family and worked hard. Of course as I aged I started getting the punch lines to Uncle Windles jokes and his political views. I feel like they both helped the members of the "House Clan" become the people we are today so a part of them will always live on because we will pass it onto our kids and grandchildren.

Terry you did a great job on the tributes to these men we all will miss. Thanks for your tributes. Mama

We enjoyed being with him almost every Sunday morning in Sunday School. Not sure how many years ago the group formed but our teacher until she passed away was Maedoris Bowman.

There were various viewpoints on Biblical teachings and personal beliefs. They were always discussed with respect for each others thoughts and given consideration; sometimes with deep thinking.

Fred had strong views about work ethics or the lack thereof of many people he dealt with.Many times this led to conversations about how to deal with these people and someone always pointed out we needed to consider their life experiences and situation and he would say,"Well I guess you are right."

Maedoris had strong feelings about about basic Biblical beliefs and preferred the King James Bible - Fred liked
the Living Bible and these were read and compared a lot.

Politics too entered into the discussions but there were no differences that were not expressed without respect for each other.

Social changes came up and opinions gently handled with all.

There was much personal shraring, laughter and love there.

Fred' passing will probably bring an end to the class because we are so few now who can be counted on to be there every Sunday due to physical limitations. We would occasionally join the class downstairs when only one or two attended. We held out doing that all the time because we much preferred to keep our small, close-nit group.

I feel this will be another loss to grieve over.

Red & Fred were both amazing men. One thing about Red. Jokes were a plenty. Fred worst 4 letter word was LAZY.

So Touching, So True, So Honorable, Thanks so much Terry

Thanks Terry, what a wonderful tribute!