A Day with Daddy

Yesterday I surprised myself with a Christmas present I will treasure forever.

A day with my daddy. 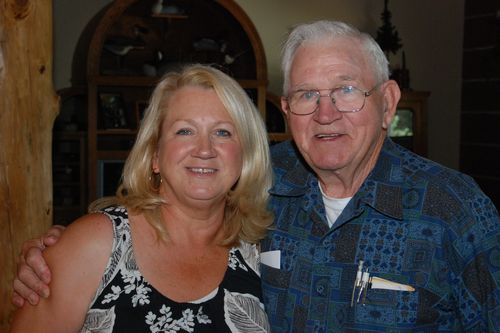 As many of you know, my beloved dad Bud has Alzheimer's and is steadily declining.  He'll be 82 in February and although his body is still pretty strong considering his age, his mind is too-rapidly deteriorating.  While we don't like to think or talk about it, we all know the inevitable truth...that unless the Lord takes him sooner rather than later, he will eventually slip away from us and the Daddy we know and love will be gone.  It's a tough situation all around.

Anyway, back to yesterday.  I hadn't started the day with any intention at all of spending it with Dad.  It was going to be a very busy day...meeting Mama and Dad at the hospital for her doctor's appointment, then heading to pick up 1500 lbs. of frozen beef from 2 calves that we had butchered and split 4 ways to deliver to our children.  A full day with a lot of driving by myself in the VeraCruz.

On the way to the hospital, it came to me...ask Dad to come along.  It would give Mama several hours to herself, a welcome break from the stresses of caring for Dad.  Dad would have a chance to see some different countryside on a gorgeous December day.  And it would give me some company while I was driving hither and yon.

God often prompts me to do things that hadn't even entered my mind, and the older I get the more I have come to act on His promptings.  So with very little forethought, I invited Dad to go with me.  Mama jumped at the chance and answered for him, and soon Mama was headed home alone for some much-needed freedom and I was headed to the butcher shop with Dad in the passenger seat.

Funny, but I really don't talk to Dad very much.  When I'm around the two of them, Mama and I do most of the talking with Dad chiming in occasionally.  And I have to admit, the first hour or so was a little awkward.  Even though he's been my daddy for 56 years, it's rare that just the two of us are together alone.  We talked about the scenery and Dad kept commenting on all the standing water.  He didn't remember the 2-day rain we had last week that caused so much flooding.

Many of you who have loved ones with dementia or Alzheimer's can relate that they often repeat phrases, and Dad will say over and over again, "God has been so good to me."  Yes, He has.  And while it gets annoying hearing Dad say that every 5 minutes, what a great phrase to get stuck in his mind.  And perhaps we all need that reminder more often than we'd like to admit.

Dad never did figure out why we were getting the meat and where we were taking it, but he was a good sport and eager to help out however he could.  So I gave him jobs and he really was helpful, although I probably let him lift a lot more weight than I should have.  But it's hard to tell Dad "no."

As the day went on and the deliveries were made, I began asking him about his childhood.  So amazing that he can't remember what day it is or what he had for breakfast or who his grandchildren are, but he has crystal-clear memories of things that happened 70+ years ago!

Of course, we know many of his "famous" stories from his boxing career and how President Eisenhower chatted with him after a boxing match and how he "knew" Bob Evans.  But there are so many stories that I don't remember hearing...he may have told me, but I never really listened.  And even though we know they were young once, it's funny how we never really think about how our parents must have been as children or teenagers.

Dad told me about his first trip to Indianapolis when he was 6 or 7 years old.  About helping his daddy farm and carrying jugs of water to the fields to the thirsty threshing crews.  About his early school days and he even wanted to show me where his brother Fred started school.  So many stories I had never heard.  Or never really listened. 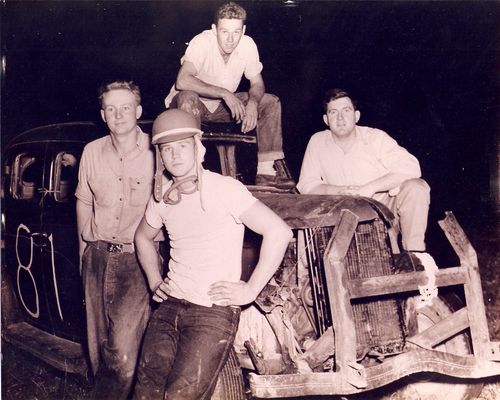 But what really lit his blue eyes up is talking about his years driving racecars at local racetracks.

That's my daddy, 17 years old, with the men whose cars he raced.

The whole racing thing never interested me much, so it was a part of Dad's life that I knew nothing about.  So I asked him... and for the next hour he was a 17-year-old boy again with his blue eyes shining how it all came about and reminiscing with so many stories that I'd never been interested in and now I was hanging onto every word.

It was a special day for both of us.  And when I took him home, he looked at me with the biggest smile and told me how much he'd enjoyed it.  And that God has been so good to him.

And I thank Him for giving me the unexpected, priceless gift of...

Terry, I enjoy your posts so much, but was especially moved by this one. Bud and Lois are such a special couple to me. We have had so many good times together. Altzheimers and dementia are horrible diseases. Praying for your Mama and Daddy. God bless your beautiful family!

So happy you got that special time...well said above - priceless!

Terry, I see Kristoffer in this picture of your Dad!! Praying for him and you too as I know how heart breaking it is :) Hugs!!