Fifty years ago today, my innocent little-girl world was shaken and would never be the same again with the assassination of our nation's president.  It was a scary, turbulent time in America and everyone who is my age or older can remember where they were and what they were doing when they found out that President Kennedy had been murdered.

For my children, 9/11 was the defining moment in America's history...for my generation, it was the day JFK died. 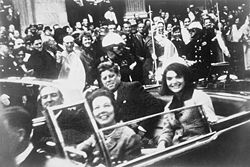 He was young, charismatic, a President the people had come to love.  He had it all...power, looks, money, a beautiful wife and children, fame and fortune.  And suddenly, it was gone, stolen by a bullet through his brain as he paraded through Dallas, smiling and waving at the adoring crowds.

November 22, 1963.  The memory of that day is forever seared into my mind.  And each year, when our nation mourns the anniversary of JFK's death, I am whisked back in time to my first-grade classroom at Hagerstown Elementary.

As a 6-year-old, I was only mildly aware of the politics of the day.  Our family watched television some, but back in those days there weren't hundreds of news shows broadcasting 24 hours a day.  We had 3 channels to watch, sometimes 4 if the weather and antenna were just right.  And my parents were not big believers in much television for children, so our viewing time was very limited.

Even if we had watched more TV, I doubt that I would have been very interested in politics, anyway.

Of course, I knew that John F. Kennedy was our nation's President.  And I knew of his beautiful, fashion-icon wife Jackie.  But what really interested me at all about this First Family were the children, little Caroline and John-John.  Caroline was just about my age, and I though she was what all girls my age should be.  She was always dressed in matching outfits with her hair perfectly curled and barretted.  I especially remember she had the most beautiful double-breasted wool coat with a matching hat AND muff (I supposed that all rich girls had muffs to keep their delicate little hands warm!).  And then, she had the cutest little brother, John-John.  I would see photos of Caroline holding his hand.  They were the perfect family.  I even had a Caroline doll, modeled just to look like Caroline Kennedy.  (How I WISH I still had that doll today...it'd be worth a mint!)

So for me, JFK was mostly the perfect man with the perfect wife and two perfect children.  The American dream life, what we all aspire to achieve.  He seemed untouchable, unstoppable, almost unhuman in his seeming perfection.  And he just happened to be the most powerful man in the world.

On the afternoon of November 22, 1963, our class was having "Show and Tell" time.  I don't know if school classrooms even do that any more, but every Friday we took about 45 minutes out of our school day and each person in our first grade class would have a minute or so to show something special they had brought that day or tell about something.  It was the highlight of our week!  That particular day I had forgotten it was "Show and Tell" day, so I hadn't brought anything special from home to show.  But I did have something to tell.  I wish I could remember what "important" thing I had to share with the class that day, but I can't.  I just remember how excited I was for it to finally be my turn in the spotlight!

The way Mrs. Kuykendall did it, the person in one corner of the room started and we each took our turn in order, up and down the desk rows.  I was sitting somewhere toward the end of the line that day.  Several of my classmates had already taken their turns when we heard the staticy loudspeaker click on.  Our principal's scratchy voice broke the silence in the room..."May I have your attention please."  He followed with the solemn announcement that President Kennedy had been shot in Dallas and had later died at the hospital just that afternoon.

Stunned, deafening silence filled the room, and then suddenly Mrs. Kuykendall began crying at her desk.  At first they were sniffly sobs that made us all turn to look at her, then she laid her head down on her desk and we could see her shoulders quivering and hear her sobs.  She tried to stifle them, but in the quiet of the room it was impossible.  We were all dumbfounded, more at the sight of our teacher crying than at the import of the news.  Stunned into silence, we sat there for what seemed like a long time, but was probably just a minute or so.  Then Mrs. Kuykendall lifted her head, wiped her eyes, and called on the next person in line to come up for "Show and Tell."

You must understand that we had no idea of the historical significance of the events we had just witnessed.  Speaking in practical terms, the President had miniscule impact on our lives there in little Hagerstown, Indiana.  To us, he was a figurehead, a symbol of the American dream, nothing more.  Although we were taken aback by our teacher's reaction, us children were personally unfazed by the news.  The fact that the President of our nation was assassinated was just that, a fact, and our lives would seemingly go on just as before.

The next child stood up in front of the blackboard, carrying her item for "Show and Tell."  But instead of "showing and telling," she simply said, "I'm sad that President Kennedy is dead."  WHAT???  I couldn't believe my ears!  I was dying to see what she had brought, but she never even showed it to us.  Mrs. Kuykendall nodded and she sat down.  Then the next child walked forward.  Same thing!  Over and over again, up and down the rows, everyone was standing to say they were sad or sorry about what had happened to President Kennedy.  Unbelievable!

What was WRONG with these people?  They didn't even KNOW President Kennedy!  I mean, I was sad to hear it too, but...he's dead, it's a fact, let's get on with it.  And I had been looking forward to "Show and Tell" all week!  I was NOT going to waste my opportunity to state the obvious.  It's not like anything we say will undo it.  And besides, we should be changing the subject so Mrs. Kuykendall wouldn't look so sad.

So when it was my turn, I walked forward and told whatever it was I was itching to tell the class that day.  I broke the chain of eulogies with my tale of whatever.  And Mrs. Kuykendall smiled.  Through her teary eyes she smiled at me, and then I knew that everything would be all right.

We stumbled through the end of the school day and I rode the bus home as usual.  My house was still there, my mama still waiting for me.  My life was intact, and I knew that despite the tragic events of that Friday, everything would be okay.  Of course, the next few days we were all bombarded with photos and images that would live in our minds forever.  The innocence of America was shattered that day, and in some ways things were never the same.

As the years have passed, I still feel a kinship with Caroline Kennedy.  Politically we have nothing in common, but the day our country lost its President she lost her daddy.  My life may have been intact, but hers wasn't.  That wasn't to be the end of tragic, untimely death in the Kennedy clan.  As we know, just a couple of years later her uncle was also assassinated.  She lost her gorgeous mother to cancer.  And we all remember horrifying plane crash that killed her hunky brother John-John just a few years ago.

It's one of the hard lessons we learn growing up.  Money, power, looks, and charisma are not really what life's all about.  Just ask Caroline.