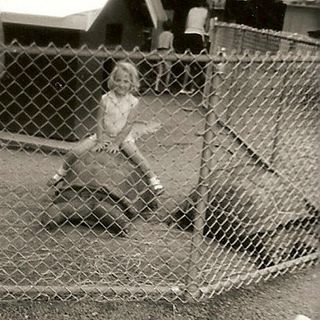 I can only remember one time in my life when I was completely, utterly lost.

I was only 4 years old at the time, and my memories of the details surrounding it are vague at best.  But I remember the terror I felt like it was yesterday.

What an exciting day it was, a trip to the zoo in far-away Cincinnati!  I was 4 years old and my sister Barb would have been just 1.  Some family friends were visiting and the two families headed for a day's outing at the nearest zoo at the time, 1 1/2 hours away in Cincinnati.

Honestly, I can't recall much at all about the zoo itself.  I remember watching the monkeys and riding on the giant tortoises.  I'm quite sure they don't let kids do that anymore.

What I do remember vividly are the snakes.

I got lost looking at the snakes.

Apparently, the snake area must have been the last zoo stop before we started home.  We walked through this building where you could see all sorts of snakes through little windows along the walls.  And then, just outside the building was a snake pit.

It was an open pit surrounded by cement walls, just low enough for a 4-year-old to peer over the top, and filled with all sorts of snakes that were slithering around and over each other.  I was fearfully fascinated and leaned across the top edge to watch them for several minutes.

When I looked up from the snake pit, my family was gone!

I climbed down and frantically searched the crowd around me, but the faces attached to the legs that surrounded me were strangers.  Strangers talking and laughing and pointing at the snakes, completely oblivious to the panicked little girl in their midst.  I ran around the area looking for Mama and Dad, but they were just plain gone!

I must have been crying, because a nice grandmotherly-type lady finally noticed me, took my hand, and led me to one of the zoo workers nearby.

At this point, I was sure I would never, ever see my parents again.  I had no idea what would happen to me, but I just knew they were gone and I was alone.

And the longer I thought about that, the scared-er I got, and the harder I cried.

By the time I reached the zoo lady, I was sobbing hysterically.  She tried to talk to me, and between sobs I told her what my name was, first and last.  And then I remember exactly what she said.

"If you will stop crying and be very quiet, you will hear your name announced all over the zoo for everyone to hear."

Wow!  That got my attention!  I immediately hushed my crying and listened.

Sure enough, just like she said, I heard my name announced over the zoo's loudspeaker, telling the people about a lost little girl.  My name, big as cuffy, broadcast loud and clear for the whole zoo to hear!  Suddenly I felt very important and special!

The nice zoo lady gave me a sucker and she stayed and talked with me while we waited right there.  After awhile, my parents showed up to claim me and off we went to the parking lot where the others were waiting.

Mama told me later about their own panic when they got to the car and realized I was missing.  They had all been talking and laughing together, assuming I was following along.  I was an obedient child (in our household there was no other choice!) and I always stayed with them, but apparently I had been so mesmerized by the snakes in the pit that I didn't pay attention when they called for me as they were leaving.

I've often thought what a clever woman that zoo lady was, distracting me by telling me to listen for my name.  Of course, in those days no one gave a thought to the possibility of child abduction or any such horrors.  She knew my parents would return soon to get me.  But she also wisely knew how to cater to a frightened, teary child like me.

It's a terrible feeling, and one I thankfully have never felt again.