Our mallard diorama is finished.

Eight mallards have achieved the closest thing possible to eternal life for a duck. 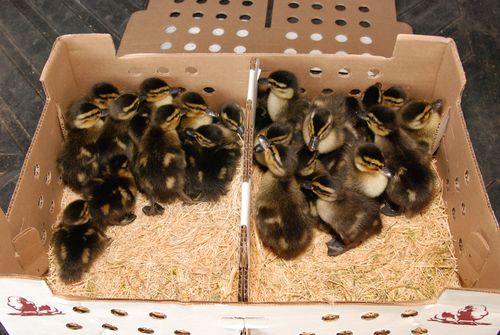 Once upon a time, there were 24 day-old ducklings.  They came into our lives in the spring of 2012, arriving at the local post office. 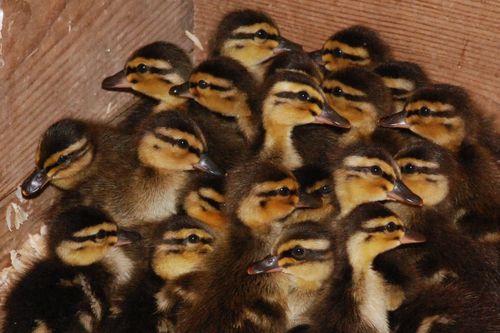 I don't think I've ever seen anything cuter! 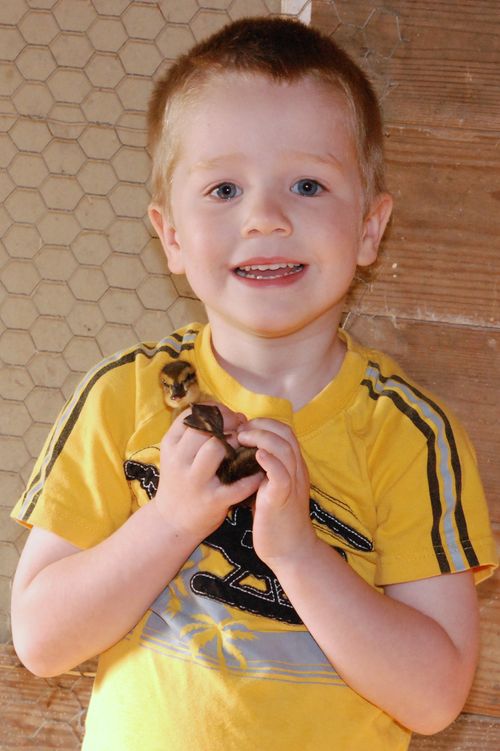 Okay...maybe the ONLY thing cuter would be my cute grandson holding them!  My, how Karter has changed in the past 18 months! 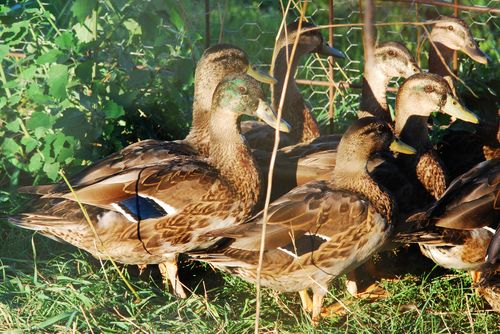 By the time they were three months old, our mallards were beginning to mature and getting their gorgeous plumage. 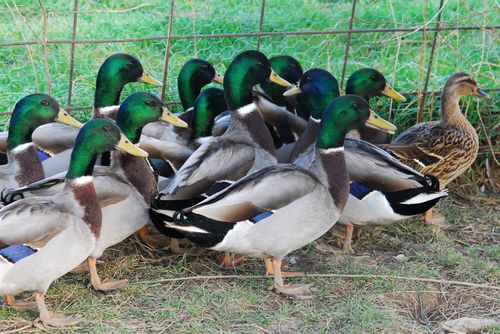 Last November, there were 16 mallards left...14 drakes and 2 hens.  We aren't quite sure what happpened to the others, only that occasionally one would accidentally get out of the pen and not be able to get back in nor could Kim catch/rescue the wild thing, so we can only assume those feathered rebels met an unfortunate end as dinner for the local coyotes or foxes. 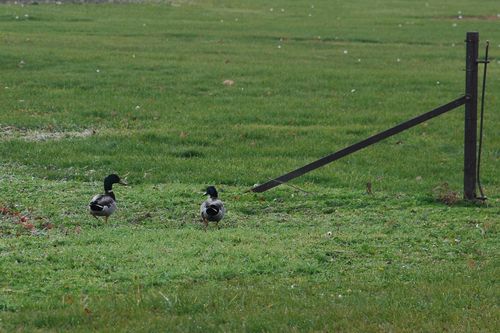 Kim crated a couple up to take to his dad's pond and let several of them free into the wild, hoping they might join a passing migrating flock.  (I am doubtful that happened, but like to believe it did...we never saw them again...)

Nine of them (7 drakes and the 2 hens) ended up in a local taxidermist's freezer, with the hopes that he would make our vision of a diorama happen.

Taxidermist Ed was excited about the project and spent many hours and a couple of visits here measuring and sketching plans.  He began working on the birds, having completed 4 swimmers and 1 flyer half-way finished (which eventually was unable to be used).  Then it happened...Ed severely injured his back and was no longer able to work.  We tried to wait it out, hoping he'd get better but he hasn't... 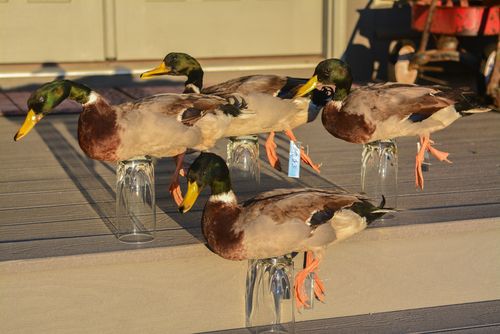 ...so in September I picked up the finished birds along with the icky frozen ones, and began the search for another wildlife artist to complete the project.

After lots of research and several calls, I happened upon Wretched Bottoms Waterfowl (gotta admit, it is a catchy name!) and taxidermist Steve Noe, who lives an hour away in Richmond.  He was intrigued by the challenge, calling it a once-in-a-lifetime project (I wonder how many times in the last couple of months he has kicked himself for that?!), and agreed to take it on...bless his heart!!! 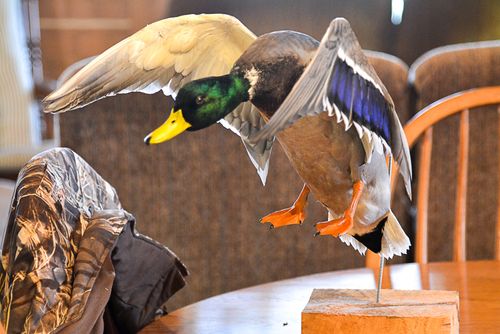 What a GREAT decision it was (at least on our end!) to get Steve onboard!  He took the remaining 4 ducks (that were temporarily in MY freezer...UGH!!!) and created wildlife masterpieces with his skillful artistic hands.  Kim and I can't get over how beautiful and well-done they are. 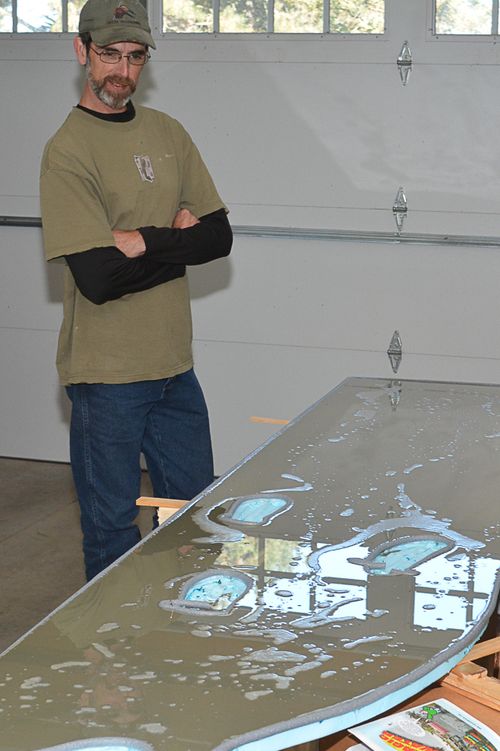 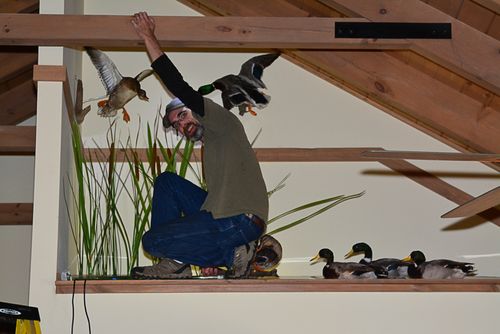 ...and a lovely weedy habitat for the duckies, ... 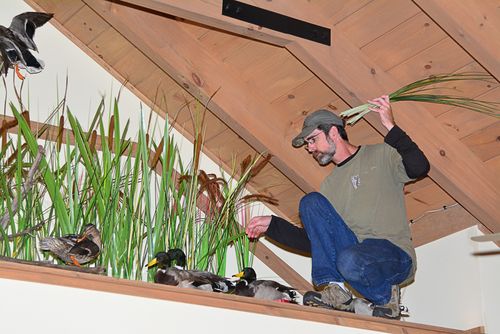 ...scaring me more than a few times along the way as he tight-roped along the edge.  I don't know how many times I told him, "BE CAREFUL!!!" 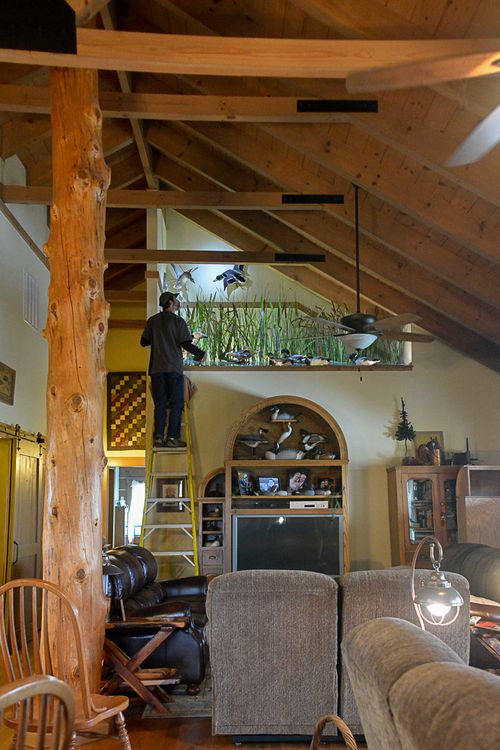 It's pretty high up there!  And not a lot of room to work, but thankfully there were no casualties.  Unless you count the ducks, of course.... 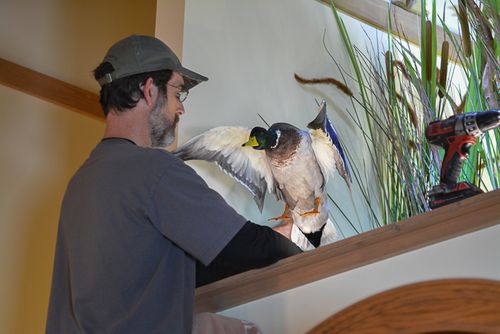 Friday he mounted the last mallard and put on the finishing touches. 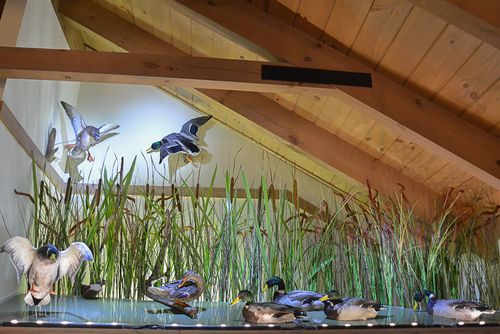 We couldn't be more pleased!  It is just AWESOME!!!

Steve made our vision reality!  He's an amazing artist, a perfectionist and very detail-oriented, even persnickety (all endearing qualities to me) ...and a pretty nice fella too!

So, 18 months after arriving as fuzzy little babes in a box from the post office, 8 lucky ducks are now immortalized on a beautiful, cattail-lined pond under the rafters in our cabin.

And everyone "lived" (used very loosely here...) happily ever after!

Vicky...maybe you won't mind birds as much when they are dead and stuffed and high up in the rafters?! :) At least you did call them "feathered friends"...

Terry & Kim it looks great. I know how excited the boys have been during the process too. Still can't say I like our feathered friends though ;-)

It looks so nice. I coulnd't have thought at a "pond" indoors.