originally posted October 31, 2008
​
The highlight of my Halloween back in the 1960s was the annual campaign sponsored by our elementary school, "Trick-or-Treat for UNICEF."
​
UNICEF, which stands for United Nations International Children's Emergency Fund, was actually started in the late 1940s, to provide care and relief for children of war-ravaged countries after World War II.  By the time I started school, UNICEF was in its heyday and quite the big deal every Halloween.
​
My Halloween costumes were always homemade, thrown together from whatever we had around the house.  In fact, very few children had store-bought costumes.  When Halloween rolled around, Mama would take us to the "Dime Store" in Hagerstown and let us pick out a mask.  A trip to the Dime Store was a big deal, reserved for the occasional times we needed to buy a birthday gift to take to a party or some such rare event. Upstairs was the adult section, a true variety store, where you could buy everything from a bar of soap to craft supplies to curtains to whatever else you can think of.  And downstairs...that was where the real treasures were!  The toy section!  The store selection was very limited, but without big retail stores like Target and WalMart available where we lived, it was the best we had in a pinch.  We didn't drive to Richmond very often, and our weekly trip to the grocery store in New Castle didn't provide much shopping opportunity. So, many times, the Dime Store was the best we had.
​
The real name for the store was Renaker's, owned by Mr. and Mrs. Renaker, a stern old couple from town.  As soon as someone walked in the door, the Renakers would follow them around as they shopped, trying to be helpful I suppose, but very annoying as well. Mr. Renaker, especially, was a scary presence, staring over his glasses at us as we picked up and pondered over the items we longed to buy.  It would have never occurred to us to shoplift, but with Mr. Renaker's eagle eyes following our every movement, there would have been no opportunity anyway.
​
It was always an exciting trip to the Dime Store at Halloween time, seeing what masks were available.  These were the cheesy little plastic masks, with eye holes cut out and an elastic string stapled on each side.  We would choose a mask, then build our costumes (as they were!) around the mask.  There wasn't anything too scary...a Casper the Ghost or witch face were as evil as they got.  After much contemplation, debating, and a little arguing, my two sisters and I would finally choose our masks, give them to Mr. Renaker and pay for them.  It was only after he had his money that Mr. Renaker MIGHT venture a kind word or a somewhat friendly smile.  He was not what one would consider a good PR person for his store.  But then, he didn't have to be.  We really had no other choice!
​
Trick-or-treating was very limited on the County Line, as we only had 3 neighbors that we were allowed to visit, and 2 of those also had young children who were also trick-or-treating.  Usually, Mama would drive us to our Grandma House's home a few miles away, where we would get a bruised up apple and maybe a stale cookie, if she had one around.  People didn't buy big bags of candy to hand out in those days, at least not the people we knew.  You got whatever they happened to have on hand, and were thankful to get it.  But anything was a treat, and we were glad to get what we could.
​
But the most fun we had was going
trick-or-treating for UNICEF! 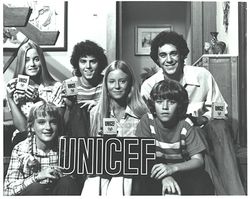 It was a huge
dealback in the late 1960s...even the
Brady Bunch, the ultimate television stars,
did it!
​
The school sponsored the big event, on a
Saturday morning around Halloween.  Anyone
that wanted to participate would show up in
costume at the elementary school, where we
were divided up into groups of 5 or 6 with a
teacher leader who had a map of Hagerstown
that had been divided up into sections of
several blocks each.  Then we would be off,
walking in different directions to canvas the
entire town.  We had little orange boxes, like little juice boxes, all decorated up for collecting money.  At each house, we would knock or ring the doorbell (that was fun!  Our County Line house didn't have a doorbell, so it was thrilling to ring the bell and hear it go off inside!), and when the people answered, we greeted them loudly and in unison, "Trick-or-Treat for UNICEF!!!"  And they would almost always (of course, once in awhile there was a Scrooge!) drop some coins into our boxes. Occasionally we'd get a dollar bill, maybe even a $5 bill (wow!) and we'd take turns folding it up really small so it would fit into the slot on the box.  Along the way, some people would also have a sucker or small treat for each of us, but mostly we just got coins.  All the way to the next house, we would shake our boxes, guessing how much money we had in there, excited to be collecting money and just positive that none of the other groups would have collected nearly as much as we had.
​
A couple of years, I was fortunate enough to be in the group that went to the Teetor home, Hagerstown's rich family.  They lived in a mansion on the outskirts of town.  The old man was blind, using a guide dog to walk around town, and my dad knew him and would speak to him.  Other than that, the Teetors were a mystery and it was a thrill to get to walk through their stone gate, up their paved driveway, and stand in front of the massive wood door and ring the doorbell.  The maid would answer, leave the room, and come back a few minutes later with a donation and treats for us.  While she was gone, I remember standing just inside the door in total awe of the place.  I can vividly remember the dark carved wood molding around the doorways and especially at the tops of the walls.  This was what a real mansion looked like!  And when the maid handed us a $20 bill, we were absolutely stunned that anyone would give a whole $20!  They MUST be rich, for sure!
​
The whole day was quite a thrill for a country girl like me, walking around town like I belonged there, kicking at the fallen leaves on the sidewalks as I went.  The smell of burning leaves would be in the air and it was just a great day to be alive!  After we had covered our assigned territory, we walked back to the school and turned in our boxes of money.
​
Things have changed a lot since then, and it's been years since I'd heard of UNICEF. Apparently it's still a very active organization and doing some wonderful work helping children around the world.  But for me, it'll always be a special part of my Halloween memories, and my first taste of international mission work. Maybe it's a tradition that we should revive, teaching children to focus on helping others instead of how much candy they can accumulate.  Something to think about...